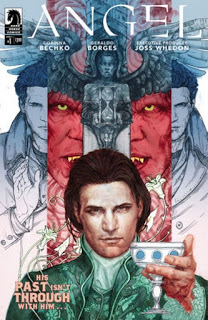 Oh Angel you dweeb of a vampire you. And Fred, still a ray of sun-shine even with a Goddess inside of you. I like where this season is going already and can’t wait for issue 2. Angel, like Buffy, is just a fantastic thing to still have around. It makes me nostalgic for things I didn’t even experience myself when I was growing up. I watched Angel and Buffy sporadically as a kid but was able to binge them because of Netflix. I know the affects those shows had on others in the genre and appreciate all it’s done.
Now this comic however is really freaking cool. I’m all for Angel dealing with his never ending demons of his past. His biggest of course being himself. I’m curious as to how the vision he experienced will play out and how Fred/Illyria will help Angel with this certain direction of his life.

”No one said anything about that. I don’t have any quarrel with you. I mean aside from the fact you just messed up my exorcism.” 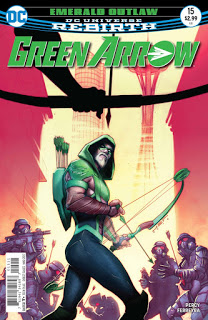 This series still looks like water color to me and I love it. For some reason it just works for me. But I digress. I’ve been enjoying DC Rebirth’s Green Arrow run each issue and this one was another enjoyable read. I’m just giddy over how everyone here is written and the changes that have happened for characters because of the Rebirth event have been done so well and subtly depending on the character.

Ollie is such an angry political guy, this series lets him get to be more political than I’ve seen him in awhile. Thanks Green Arrow team! Other things I enjoyed this issue was Emi, Ollie breaking a mirror all angsty and the prison fights were pretty cool looking with how they were drawn/colored. I’m curious to see how this story line will wrap up though when the time comes.

”Maybe one day we’ll be able to lie around and binge watch Netflix and eat our way through a carton of ice cream.” 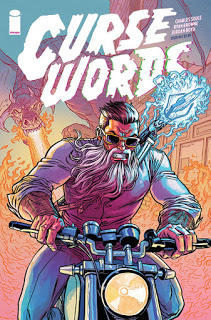 Wizord makes me think of a young Dumbledor with John Constantine’s attitude. He’s a total train wreck and I can’t wait to see how his story plays out. The time format was something I enjoyed, Margaret is either going to turn out evil at some point or get killed off, calling it now, and the fact Wizord has a staff like Gandof is a-okay by me. Everything in this comic seems like it’ll give me a fun and crazy story in 40 beautiful pages.

It’s a bit hard to describe Curse Words because I don’t want to spoil it so I’m going to use the tag lines the Curse Words team gave it, ”Once upon a time, there was a wizard. Then it all went to Hell.” 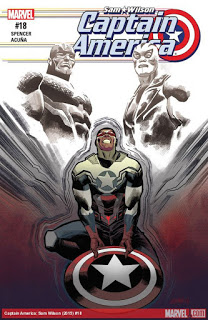 Aw Sam needs a hug. And to kind of sorta get away from Steve asap. OR, find out he’s HYDRA Steve and be aware to take his words with a grain of salt. While I’m 100% proud of Sam for uploading the video footage he had of Rage being beaten by the cops, I’m wary as all Hell for next months issue. It’s going to be total chaos.

Nevertheless, this was another great issue. I’m so happy to have been reading this series for as long as I have. It’s such a well written comic that I’m always recommending to people.

”Then, we get you a lawyer. I know some good ones — Matt Murdock, Jennifer Walters — they’ll shut this case down in a second.” 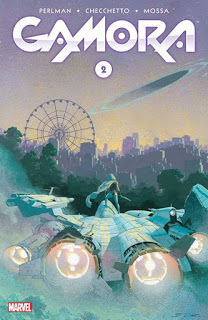 1) I like that this is a prequel comic. It’s been awhile since I’ve got my hands on a good prequel story.
2) THE ART IS SO PRETTY. JUST TAKE ALL OF MY MONEY NOW TO GIVE ME THE REST OF THIS SERIES.
3) I’M GETTING BAD-ASS LADIES BEING BAD-ASSES AND HELPING EACH OTHER ALBEIT BRIEFLY. I’m all for where this story seems like it’s going and can’t wait to see what tricks the Gamora team have up there sleeves.
4) I didn’t read issue 1 but this was easy to jump into. I’m pumped to see where this goes and I know it’s going to suck when Gamora does follow through with her revenge. It’ll be amazing but I’m still not ready and it hasn’t even happened yet. 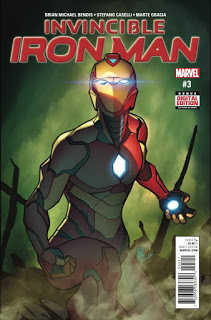 RIRI GETTING HELPED BY PEPPER? MARY-JANE AND FRIDAY? SIGN ME UP, GIVE ME ALL THE ISSUES. I AM ALL FOR THIS. I’M SO FOR THIS I HAD TO WRITE IT IN CAPS LOCK.


So, I have yet to read any of the other issues that Riri has been in but I’m going to go fix that as soon as possible. I can’t wait to see more of Riri being her amazing 15 year old self. I’d LOVE to see Riri and Moongirl together, oh the things they’d create! Just think about it Marvel, I’ll let you have this one for free. 😉

This did however feel a bit like a set up issue, it felt like a first issue getting the hang of things kind of story but I’ll take it anyway because it was still enjoyable. I just hope that issue 4 feels more ”solid” for me when I read it next month.

”Send your ideas to @dontbotheri”llfiguireitoutmyself.” 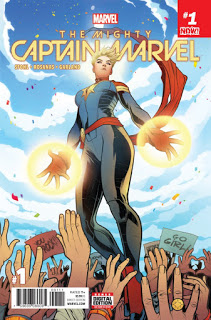 So I honestly went into this with very low expectations simply because of my apathy over Carol thanks to Civil War 2, and just the way I’ve ”seen” her in every other series but Jessica Jones. This issue however helped me like her a lot more.

At the end of the issue there’s an amazing Re-Cap page where it states ”all I ask is that you give Carol, my Carol, a fresh read and an open mind” and that’s what I did. I went into this with low expectations but an open mind. I ended up really enjoying this issue and I’m excited to see where this goes.

”Jess, this is Jayson Jay, our director. Be nice or he’ll give you a cameo.” 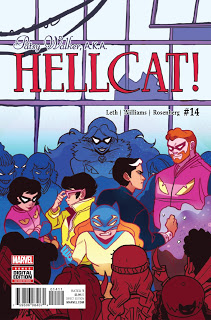 I love that this series is always a fun read but still manages to deal with topics like gender and sexuality. I applaud the team for managing to make a series filled with the adorable ”go get ’em” attitude heroin that is Patsy Walker, filled with cat puns, friends of all genders supporting one another (and putting them in there place when they get a lil out of hand) and still have a compelling fun issue time and time again.

One thing I also need to point it out is my appreciation for the art always being consistent and when it does look different, it still has the same feeling for the series. I love and hate guest artists sometimes and I appreciate how well this team works together. It’s a series that stays with me and I’m happy it exists having so many amazing ladies in the comic and on the team behind it. Thank you again Patsy Team for being adorable. I’m thrilled that Tom got closer with his ex and can’t wait to read issue 15 to see what the Hell is with those fish of all things.

”It’s just the beginning. With these claws, there’s no stopping us. No Spider-Men to turn me down. Not that I care, or have ever  cared!” 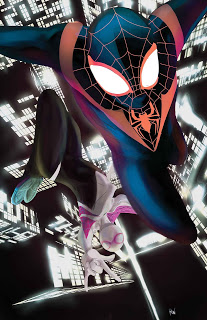 I love and hate cross-over comics, sadly this was no expectation.

The Bad;
I didn’t really need bullet points but it’d be weird having those as shorter sentences. Anyways, Miles is a sweet kid and I hope this goes well for him? I’m all for Gwen and him teaming up and helping each other be open. It’s cute. Go Spider Family.

”Miles. Look, my head is an angry beehive.” 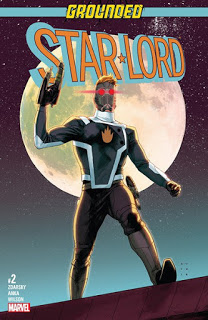 I am all for Matt Murdock casually bashing super-heroes in court when he is one. And for the shade between Abigail Brand of the Alpha Flight space initiative dealing with Matt. I’m just all for this. The fact that they draw Peter with the same ”gaze” woman get drawn in comics is pretty amazing. Thank’s Star-Lord team. It’s appreciated.

This is now on my list of comics to read, I’m putting it on my Pull, it’s going to be a fun read for however long it lasts without getting boring. I know that’s saying a lot after two issues but I feel like this is going to be a very entertaining series for a long time. Or at least for however long Peter’s away from the team. I hope he stays in New York for a long time because they have an endless list of characters he can run into to deal with, or attempt to help in ”battle” while they do there jobs. Next issues cover with Peter all strung up by Matt in his Daredevil costume is fantastic. I’m very excited to see the on going ”battle” that will be Matt Murdock and Peter Quill.

Peter’s community service is going to be fun, I hope our adorable Mr. Allen doesn’t die or get taken at some point. I feel like that’ll be a thing. Or that Peter will have to save Mr. Allen’s son from someone for reasons. But I digress, can’t wait for issue 3!

I am literally a child who can’t even vote and even I know that’s incredibly irresponsible! 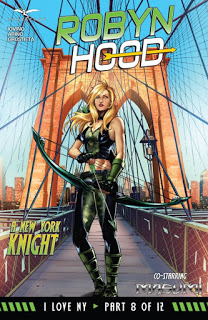 I think I’ll be forever snickering at the fact Robyn had a fight in Staten Island. I also can’t wait for her to have a fight in freaking New Jersey.

Robyn Hood is such a fun character. I had spent months putting off reading Zenescope comics because the covers annoyed me at how sexualized the woman were, than I read one of the comics and down the rabbit hole I went. Robyn (and Liesel) is a great character to look up to. She’s a lot like Buffy to me so of course I love her. The fight she had inside her own bedroom was so freaking cool, I would love to see that on screen in a live action or animated movie/show. It’d be some Game of Thrones level brutal delight.

Robyn’s feeling pretty empty now on her own and I’m enjoying how she’s handling it. Attempting to follow her New Years resolutions and so far failing. She needs all the hugs and coffee New York can provide her. I’m excited to finish another Robyn Hood series/story line! On word to issue 9!