Batgirl and the Birds of Prey #7 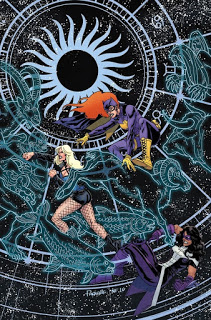 MY LADIES SPENT VALENTINES DAY TOGETHER!!

This issue had the gang briefly fighting this amazingly cheesy Zodiac themed villain in the beginning of the issue when in fact, this one is about finding out who the Hell has been trying to break into Bab’s Clock Tower hide out. Surprise, it’s her relators and Dinah and Helena go under cover together. This leads to my girls being amazing as always, some great under-cover costumes and before we get that, we get a very entertaining Helena and Dinah ”bonding” at Dinah’s apartment. That she’s hardly been in because our girls mainly in Seattle with Ollie fixing his shit.

Helena and Dinah together always make me smile, actually, any time any of these ladies do something I’m most likely smiling while reading the comic. This has been such an amazing series for me to read and I’m really happy I get to read this now more than ever. 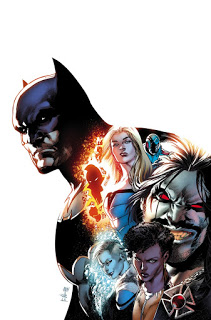 This is such a weird team up, I honestly have no idea how to feel about it. We’ve got Vixen, Black Canary, Killer Frost, Lobo, Ray’s teaching assistant, this guy with a Doctor Fate style helmet and Batman? It feels weird to me, I enjoyed this ”introduction” to the team style issue but am curious to see where exactly this is going to go. I love the concept that Batman’s got behind putting everyone together but I’m not sure how long it’ll last. I’d love if this was a mini-series but I feel like this is going to be a really long series for reasons I have yet to find out about just yet. You know, next to money.

The art is up my ally, I love how everyone’s being drawn, I’m all for the ladies in this group and I feel like the guys will grow on me. It’s easy to see this is as another attempt at a Suicide Squad esq. team and I’ll see how I feel about this series after the next issue. I do know I’ll probably give it five issues before I decide to drop it or not.

”Welcome to the hall of lowered expectations.” 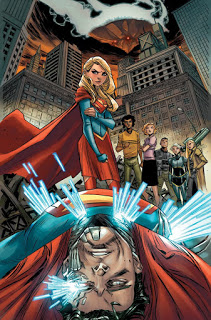 I think it’s safe to say that this Supergirl series is basically an adorable re-telling of the TV show. I’m not saying that it’s a bad thing, but I’m saying that a lot of what I see on the weekly TV show is happening in this adorable comic.

Kara is and probably always will be, an adorable ray of hope. Even while fighting her dad she’s kicking ass and still helping him even though he’s trying to kill her/take over the world. Like the TV show, this is always a pleasure to read/watch. It’s an easy to read series with some set up for some great stuff. I’m excited to see where this series is going to go with a title like Werewolves of Krypton as next months issue. This was a fun story arch to read and I’m happy Kara’s at Cat Co even as an adorable high school student.

”You and your substance-devoid radio station will be my personal project now until my non-existent retirement.” 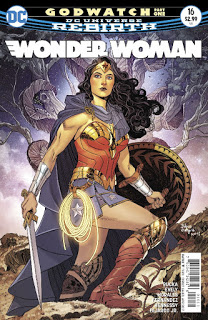 You know that text post meme ”Everything always happens so much”’ ? Well, that’s exactly how I feel whenever I read Wonder Woman. So much happens, everyone needs hugs, even the villains, It’s just such a fast paced, crazy ride every issue. Even when it’s a filler issue, things still get done. Which I appreciate because so many filler issues just make me annoyed for buying them.

This was not a filler issue though. This issue filled in some of the gaps of the series and gave me some information I’ve been waiting for. I also love all of the character introductions in this issue as well for the villains. I’m pumped for issue 17 and am really curious as to how Steve’s story arch will intersect with Diana’s once again.

”It is very confusing. Yes. Yes, smells strange here to me also.” 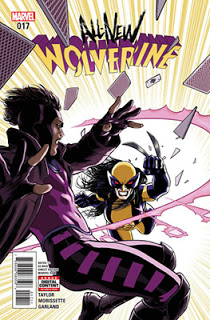 I love any time a comic does intense flash backs/mind related things. The fact I got to see Jean and Laura together was fantastic and the fact that Laura was not in the mood for this shit also  made me grin. I’m happy that Laura and Jean’s relationship is different than her and Logan’s relationship. It’s just refreshing to see even though I do like Jean as a character, I’m just happy that Laura wasn’t all starry eyed because Jean Grey was going to help her out.
Gabby is a precious little badass girl and I need to give her all of the fluffy animals to be with. I just want to take her to a Petco or any other pet-store and have her help me take all of the dogs. We’d have a great time stealing animals together. I’m proud of Laura and am excited to see what the Hell happens in next months issue. Things are far from over for Laura and Co and I can’t wait to see how it all plays out. I’m really enjoying this story arch and series as a whole. I’ve never been let down while reading this series.

”Hey. You’ve got this. You’re Wolverine. You can kick the ass of anything.” 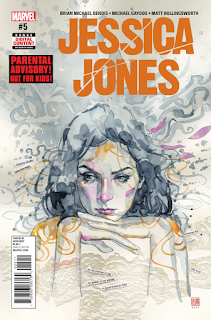 Jessica mother fucking Jones ladies and gentleman needs a hug. And booze. I will happily provide both to my tragic baby girl. This is one of those series that’s taking it’s time getting places as a whole BUT each issue still has given me an ”oh shit” moment.

I appreciate that about this new run of Jessica Jones. I’m happy that the original gang is around to do this or else I’m not sure if I’d continue. What I love most about this is how they are playing with the fact that Jessica hasn’t really been in the picture for awhile in the main-stream Marvel world. Things have changed while she’s been in jail and things are about to get way more completed given how this issue ended.

Things have been established as bat shit crazy now if the murder husband can be trusted. I’m 100% excited to see where this series goes and how that story line plays out. I’m digging the slow build up that this has been giving me because I know that it will pay off in the end. 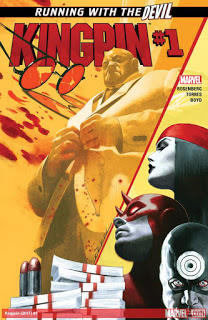 Did I really need a new series to start? Yes, apparently so. Kingpin has entertained me as a character even when he shouldn’t have since I watched Daredevil on Netflix. Since than, I’ve always enjoyed his appearance in comics. He’s such a sassy, insanely rich guy and I love watching him beat the crap out of people because he can. Fisk is such a crazy ass bastard and he keeps things interesting. He’s always plotting something and I love watching him and Matt run circles around each other. I feel that I’m going to thoroughly enjoy this run of the series because of the whole writing aspect. I’m a sucker for books about books.

You know I’m not going to sleep with you, right?

Neither is Wesley, but he still eats the free food. 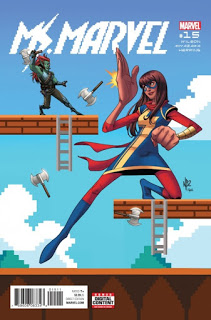 I love how fantastic this series is. I’m thrilled that they let Kamala have her fears over people knowing she’s Ms. Marvel. I’m happy she’s always helping Clara out at school, that they talk about the pressure kids feel at school to do well, and that things are all kinds of sketchy with her current troll villain.

Kamala makes me happy, she’s a great role-model for younger kids to read and the series always deals with topics that someone like say, a young Peter Parker, wouldn’t have to go through. Kamala’s monologue esq. dialogue throughout the issue also made me grin a lot as it started off as a pretty dark one but by the end of the issue got a lot lighter. Her over all positivity while things are nearly crumbling around her makes me a thrilled Ms. Marvel reader.

”You can’t scare me with this Mr. Robot stuff.” 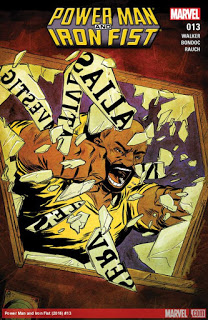 So it’s official about Jess and Luke being on the out’s in the current run of both series it seems. This saddens me but I’m also happy about the consistency. I remember Jessica leaving earlier on in the series because of everything that was going on, left with the baby but still, sad nevertheless. This also means Luke and Misty kissed and Danny would be insanely pissed if he found out. At least that’s what I think.

This issue is basically everyone trying to deal with Alex, mainly wrap there heads around what exactly he has planned. It’s a solid enough issue, sets up some cool things to come but genuinely all of the stronger one on one character moments is what made me enjoy this issue as much as I did.