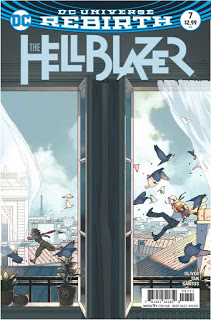 The Good; John and Mercury are still sort of bonding! They’re in Paris in search of a man who John met once and supposedly knows about Diijin’ . John being John though this doesn’t exactly play out the way he thought it would.  I also love that this series doesn’t forget Mercury’s abilities even if they aren’t as part of the plot as they were in the older Hellblazer days during the Fear Machine arch. It’ll totally come into play more than it already has for her with her going into the Green and all that jazz.


The Bad; The new art style isn’t exactly my ”thing” just yet. While I do love the ”brush” type style, It just doesn’t ‘fit’ the comic for me just yet. Having to translate the French was a bit annoying but that’s just me.

”Croissant or Pain Au Chocolat. On the face of it might be a simple question, but it says a lot about a person.

”Like putting the tea bag in after pouring the water?”

”No. That I class a deal breaker.” 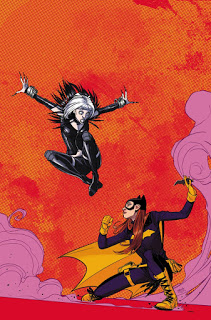 The Good: BAB’S HELPING THE KIDS CODE AT THE SCHOOL WAS AMAZING. And that website for MIT’s stuff is fantastic, I’m totally going to see what I can do with that for myself. I love when Bab’s gets to help others, especially children. It’s just really sweet and makes me happy to see/read. I also love that this series is ”aware” of gender pronouns/identifications with it’s characters. The fact that Alysia and Jo are not only married but dealing with having a child makes my heart warm over the fact it’s apart of the Batgirl story-line, even if it’s just a subplot, it’s still a plot going on in a freaking main-stream comic.

The Bad: I mean of course Cobblepot’s kid is going to want to get rid of Batgirl. Of course he’s going to probably be a secret daddy’s boy who want’s his father’s approval and possibly has had it since he went to return the check and that he just tells girls/Bab’s that story so ”we’d go back to my place and you’d try to heal my childhood wounds” shit. Which while I found funny, I still sighed out loud over it. 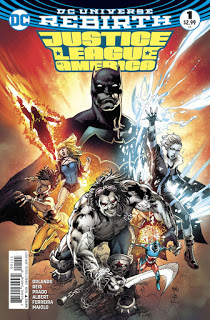 The Good: So Vixen is still amazing and I want to high five her over how she talks to Batman. I hope this series focuses more on the team actually becoming a team than this odd Suicide Squad esq. ”we all hate each other but we kind of like each other but fuck you, I’M IN CHARGE” style that last months issue and this months issue gave me. I understand it’s meant to be ”dramatic” that no one really gets a long but Vixen’s right when she says the team is more of a powder keg than anything else. It’s not interesting to me but I’m a sucker for the art style this series has so far.
The Bad: GOD BRUCE JUST GO AWAY.

”Ruled? Sorry, Havok rulers don’t do too well around here.” 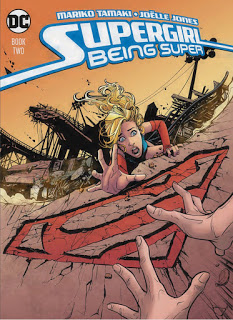 The Good: Awwww, KARA! The fact she ate all of the cerebral in the house than went out and bought enough for five people was adorable and heart breaking. I love that this series focuses on high-school Kara in a different way than the previous Supergirl run just did. The funereal/wake scene was emotional on a different level than some of my stories have been in a long time and I want to applaud the writers for pulling that off the way they did. As a whole though I really loved this issue and I’m thrilled that the comics are as long as they are.

The Bad: Her sketchy track coach totally works for the DEO or something along those lines. She’s meant to monitor Kara, I CAN FEEL IT IN MY BONES! It’s not exactly a ”bad” thing, it’s just something I’m predicting and feel that it’ll be a weird reveal. 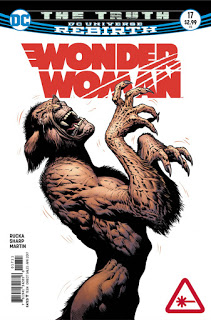 The Good: Diana and her snake in her arm entertain me a lot more than it probably should. I also love Diana with her little glasses and just looking adorable while all of this other chaos is going on around her. It’s cool to see how her absence affects Themyscira but next to that, meh.


The Bad: I honestly wasn’t a major fan of this issue. While I some-what enjoy the whole Diana locked up inside an insane asylum plot line, it’s also on the slow side for me. Nothing really seems to be getting ‘done’ per-say minus watching our big bad villain get built up/continue to be a threat for everyone else in Diana’s life. 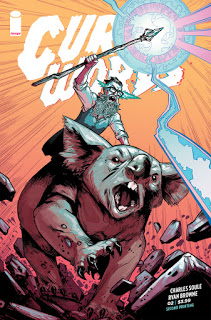 The Good: The art is beautiful, the fact all of these other words have hysterical languages like BIRD LANGUAGE, and the fact the word worlds language is called Mystic! This issue and issue one were filled with so many little gems like that I’m honestly a bit sad over the fact that the series is only three issues long. I was hoping it’d be a longer series or at least five issues. Nevertheless, I’m thrilled to read it and all of it’s craziness. I’m excited to see how Wizard faces his ex in issue three! 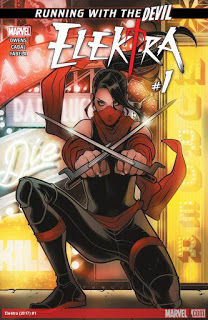 The Good: I’m kind of all for Elektra taking down a crazy casino in Vegas and just generally going around kicking some ass. I’d honestly read just an entire volume of Elektra just popping up in abusive asshole’s layers and killing them before disappearing to go get others. Which I honestly think will be happening a lot throughout this series or at least, this specific story given the fact it’s taking place in a gigantic Vegas hotel/the setting is Vegas.

The Bad: I’m slightly worried that this will eventually involve Bullseye and Daredevil coming into this series and while I do thoroughly enjoy Daredevil & Elektra together and the chaos that is caused when Bullseye is involved with the duo/in general, I want this series to stay with just Elektra.

”I thought you said red wasn’t your color.” 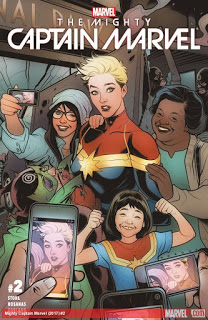 Poor Bean, this kid needs a hug and maybe some cuddles from the cat.

The Good; This is a cute series and I’m happy I get to read/review it. I’m enjoying this side of Carol where she gets to process the Civil War 2 events as well as try to move on from it all. She’s clearly trying and I’m happy she has the Alpha Flight crew to help her through it all even though it seems like that might not always be a thing during this series.

The Bad; I’m a bit worried that the shape-shifter villain will be doing the token ”turn everyone against each other” trope/thing in issue 3 while Carol is temporarily off the ship. Or in issue 4 when the story-line possibly is tied up.

”How can that Flerken Furball have 117 offspring and zero maternal instinct?”

”You mean, compared to someone who asks a space cat to babysit a jelly bean breakfast?” 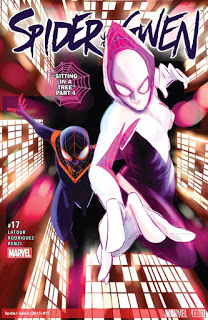 The Good: So I didn’t read Miles issue but I was just fine reading this one. Is that a ”good” thing? I’m not really sure just yet. This is an enjoyable event, I honestly enjoy the Spider-Verse cross-overs for the series I actually ”understand”. Nevertheless, I’m happy that Gwen is still dealing with S.I.L.K. Agent’s from the Spider-Woman crossover event. That’s one of those little ‘subtle’ things I’m enjoying while reading this run of Spider-Gwen and Silk, the fact they are both affected by the cross-over still while Jessica Drew has enough on her plate to deal with that drama anyways.

The Bad: I JUST WISH MILES AND GWEN WEREN’T BECOMING A ‘THING’ DURING THIS CROSSOVER.  Having Ms. Marvel have to ask about it was not only awkward for Gwen but also awkward for me. Thanks for being awkward about it Gwen.

”Everything get’s a spin-off these days.”

”No. No. I’m fine. This is fine. I’m okay with the events that are currently unfolding.” 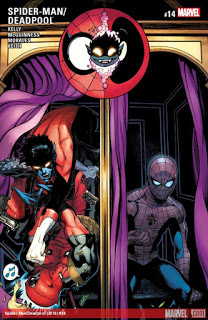 The Good: So back in the beginning of the series Peter was in Hell before Wade realized Peter was actually Spider-Man. It did leave a mark on him, it just hasn’t been addressed really until the past couple of issues. This one in particular really showed how much it’s affecting Peter with his death to Itsy Bitsy obsession. It’s understandable given all of the chaos she’s caused but also kind of sad that this is how Peter feels even after every villain he’s faced. But you know, character growth or something like that. It’s more like a character switch with Wade trying to talk Peter out of killing but also showing him still how to kill because he’s Wade Wilson.

The Bad: It wasn’t really shocking about Peter leaving to go after Itsy Bitsy given all of his fights with Kurt (who was amazing) and Wade this issue.

”Yes and all of your uber mega-rich white guy weapons of privilege have scored you exactly zero wins against Itsy Bitsy.” 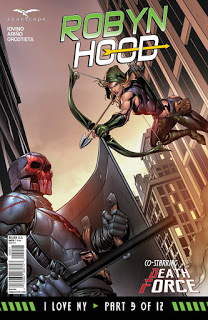 The Good: ”MAYBE THE ROOSEVELT ISLAND YODA IS RIGHT.” Oh man, Robyn is just filled with amazing ”zingers” and I applaud the writers for that one. Robyn is such an enjoyable character to read and I’m happy this series/story has another three issues. I’m curious to see how it’ll all wrap up given all of the crazy things that have gone on during it so far. All poor Robyn wants to do is probably retire for good but the city that never sleeps doesn’t really seem OK with that. I hope she gets to have a peaceful life at some point you know?
The Bad: I don’t remember the Catskill’s redheaded woman’s name but I honestly don’t care for her.

”Umm hmm. Nice meeting you, sweetie. And cheer up. You’re too young to be such a bummer.”

My ranking for the weeks;