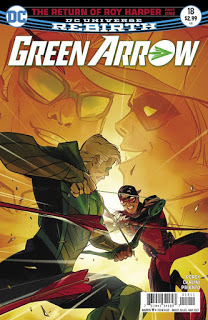 Oliver Queen did you really think attacking Roy would go well? Or I guess helping him either?


Man one thing I appreciate with the Green Arrow Rebirth run is how they twist the relationships readers are used to from the various additions that Green Arrow and Co has experienced. This was a refreshing take on Roy and Oliver’s relationships and I’m thoroughly entertained by the ending of this comic. This was a great way to continue the previous subplots but also start up a new plot involving Roy and Oliver’s relationship in a fun and dramatic way.

One of the things I enjoyed that was both good and only slightly annoying, was some of the flash-backs. It was cute but a bit too jumpy for my liking even though I get what they were doing/using it for.

”My gut said ”This kid needs help and so does the Green Arrow.” But when I assigned you to tech support, I wasn’t asking for a toy box to lug around on my back. You’re making things too complicated.” 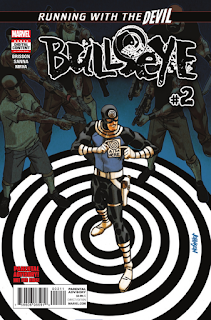 I love that Bullseye is that type of bat-shit crazy that everyone is either scared of or just knows about. He’s got one helluva reputation so it’s enjoyable to see how characters in apart of the world that he isn’t regularly in aren’t exactly thrilled that he’s in there turf.
Bullseye is one of those characters that I know I’m not really supposed to ‘like’ but he’s stupid likeable. He’s so bat-shit crazy its like enjoying Kingpin. We know what they are doing is 100% awful but how they do it is just so damn cool. Plus it’s a comic-book, this isn’t a person I’m actually rooting for in real life.
I’m really excited to see how this story plays out as the series goes on. This issue set up the FBI subplot and has of course more chaos for Bullseye to cause.

”Damn, I was beginning to think you’d never come.” 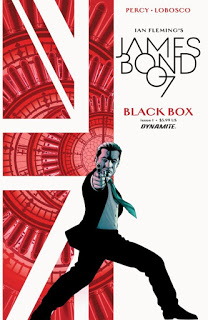 Surprise, surprise, James has to go kick some ass and fight a beautiful woman. I swear that wasn’t as sarcastic than it probably sounds/reads.
I’ve been pretty bad at reading the James Bond comics but I do thoroughly enjoy them. The arts always been top notch for this type of series. James Bond is just one of those characters that is always fun to read, he’s a charming asshole who now has a pretty red-headed woman after him. Oh the horror. Totally see them getting romantically involved in some way because he is James Bond and it’s sort of his thing.

Over all, I enjoyed this comic even though it was just a set up for the new arch that I’m going to do my damndest to be up to date on at least for the fun of it all.

”I like the sting of winter for the same reason I like the burn of bourbon. Because it numbs.”
And
”I don’t know whether to feel embarrassed, intrigued, or deeply pissed off.” 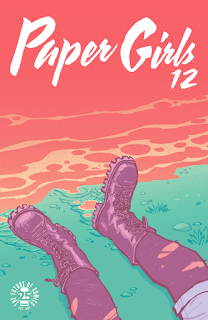 POOR KAJE, THAT’S THE WORST THING FOR A YOUNG GIRL TO DEAL WITH, LET ALONE ON AN ISLAND! A PRE-HISTORIC ISLAND! Thank you writers though, bravo, that was kind of adorable.

As always, I’m in love with this art style, it’s beautiful in the way the colors are so bright and almost pastel in the color aspect. Describing colors is weird for me.

ANYWAY, this issue gave me some massive geek-out moments from start to finish and I want to high-five the writers because of it. BABBEL FISH NEED TO BE REAL ALREADY DAMN IT. Douglas Addams came up with that 1981, it’s 2017, we have stuff that’s close to it but damn, I’d shove a fish in my ear if it gave me translations. Or you know wear that band that the girls have but whatever. 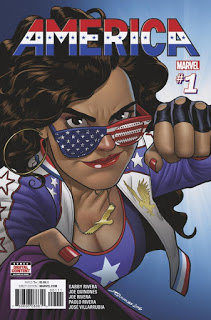 So many first issues have a lot of issues. This comic is not one of them. America is amazing and I’m so happy she finally has her own solo series. America’s just a fantastic character and I’m filled with glee over her going off to college to figure things out. It’s cute, relatable and easy to follow but not in that ”wow this is meant for a child” easy. It’s that easy that a well written story is when it’s also meant to be new reader friendly and still enjoyable for people who have read previous stories involving the lead. Bravo G. Garcia, bravo!

One of my favorite things about this comic though was how pure it was to America’s character. None of this felt out of place/out of character for her, it all felt ‘real’ and I’m thrilled to get to see her grow as a character as well as go on all of these crazy adventures that the ending just set up.

”Bare fists. Stars and hearts. Mega-babe. My best one.”

”What the holy menstruation are you doing here?” 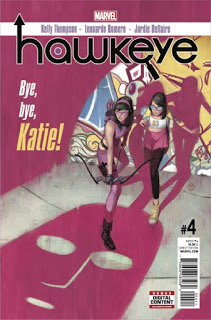 SO I’M ABOUT TO GUSH HERE BUT I’VE BEEN ROLE-PLAYING ON MY JESSICA JONES TWITTER ABOUT JESSICA COMING TO L.A. TO CHECK ON KATE AND WHAT DOES THIS END WITH? JESSICA FUCKING JONES POPPING UP.


Anyways, this issue both wrapped up the current story-arch and set things up to be just as crazy next month. This is a fantastic series to read and I’m happy I get to enjoy it every freaking month. I haven’t been let down a single issue. It’s just a fun and enjoyable series and not because it gives me Jessica Jones cameos or references to America. I enjoy this series because I freaking love Kate Bishop and all of her badass-ery that the series gives me. Not only does it give me badass, smart-mouthed, three steps-ahead Kate, it gives me vulnerable Kate. This next issue looks like it’ll be an awesome start to a new story-arch/jumping plat-form to continue what has been happening for the past four issues.
”As if sass needs a point.”
And
”’Yes! Julie Andrews saves the day! Sweet assist from Hawkeye. BEST TEAM-UP EVER.”
Silk #18 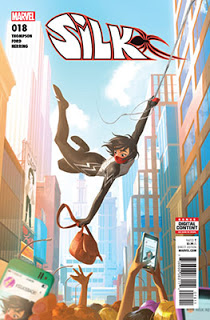 Holy crap did Cindy Moon just have an issue that didn’t make me need to cover her with a blanket for the entire time I read the comic? DID CINDY MOON JUST HAVE A HAPPY ENDING? WHY YES, YES SHE DID.

Cindy Moon hasn’t had an easy life, let alone an easy comic series to read. And by easy I mean every few issues, or every other issue, I’m hugging my Silk comic and getting it all crinkled.

This issue was a great come-back to the Clone Conspiracy stuff I’ve been reading for her because she’s been apart of that event. It’s nice to see Cindy back to doing something herself, picking up the pieces of her life after all of that chaos and moving on/moving in with her brother. It’s just refreshing to see a new story for her that seems like It won’t make me cry for her so much damn it. 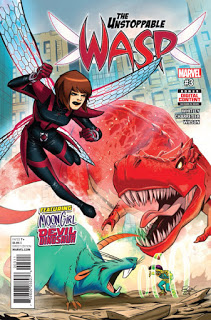 Surprise, surprise, despite my massive love for issue 1, I sort of forgot about issue 2 last month of The Unstoppable Wasp but that little catch-up made it easy for me to see what I missed. I swear I’ll catch up properly.
Anyways, I’m happy that our little Nadia has teamed up with Lunella, adorable little girls working together fills my heart with glee. Even if it’s just a comic-book. It’s good for actual little girls to see this. Especially that the entire issue is just Nadia and Jarvis recruiting people to be apart of her research group/lab. It just warms my far from science skilled heart.
This is one of those series that I just smile a lot while reading it. I get to see adorable science girls doing science things, helping each other, encouraging each other, form an amazingly diverse group of G.I.R.L. scientists, yes, just 100x yes to all of what’s happening here. 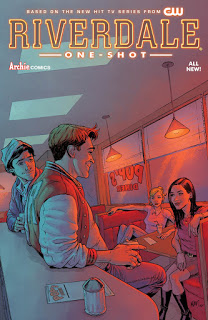 Man I love one-shot specials. The longer the special, the happier I am. I’m ”proud” of the TV show writers for managing to make this be the things we haven’t already seen on the TV show (unlike Suicide Squad) in away that was still interesting and enjoyable. The one-shot’s stories managed to feel ‘fresh’ and still have the ‘tone’ of the television show versions of the Archie Gang but have the look of the comics. Bravo Riverdale/Archie team up!

One thing I’m curious about since this is apparently going to be a thing, the Riverdale style comics along with the on-going Archie series, is how they’ll get to say Cheryl Blossom’s story-lines, if they’ll do some one-shot’s for the parents or the other characters in the show like Reggie or if it’ll focus on Archie, Jughead, Betty and Veronica.

”I spent the rest of the summer writing about Jason. I’d finally found the story I needed to write. Wherever it might lead me.”

My Rankings For The Week;