Batgirl and the Birds of Prey #8 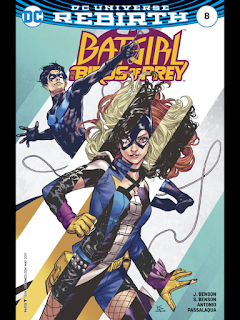 Oh man I loved this issue!

Babs and Dick always entertain me, I love them. The thing I think I loved most of all though was how sly Helena and Bab’s were discussing both of there relationships with Dick. The Birds of Prey are such a fantastic group and I’ve loved all of these comics so far. I also like how this series is handling the fact that Babs and Dinah both off in separate series, Bab’s in Batgirl and Dinah in Justice League of America. I’m all kinds of excited for where this new event is going to go and simply can’t wait for Dinah to kick some serious ass in next months issue.

The fact I get to see Dinah dealing with her meta-human stuff pleases me to no end. This’ll be a fun new story-arch. Also want to high-five the ladies for making Dick sit down and relax/heal himself up.

”Now put your suit back on. Your abs are distracting.” 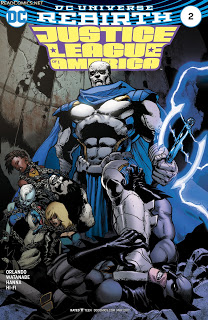 Man this is such a weird series. I’m enjoying it but I also hate it all at the same time. I just don’t understand why this specific series is a thing now of all times. Don’t get me wrong, I’m all for whatever series gives me more Vixen, Black Canary and Killer Frost but as a whole, I just wish Batman wasn’t in it. Like with most series, I’m starting to feel like Batman is just the money grab to get people to read the series.

Story wise on the other hand, I am enjoying the gang going after the Extremists/Havok and his ”Team” of people. It’s a pretty medicore series to me at this moment in time but I still think it’s worth reading at least for some ‘shits and giggles’. This is far from a mind-blowing comic, it feels like this series is just a filler series for something elese to come but that’s just my feeling on the series. 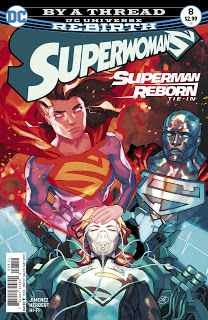 So I’m a casual Super-Man fan therefore I’m really bad at all of the ”Super” family. Lana is pretty sweet, I’m going to enjoy reading her other comics now that I’ve read this issue and got completely and utterly lost. I do feel that this was a good issue for me to jump into the series on even though I knew literally nothing about this comic. I also keep on forgetting that Lex is sort of a robot now and didn’t know about his sister being a disembodied head that he keeps on his basement like Papa Midnite holds onto his dead sisters skull. What the Hell is it with villains and holding onto there ‘dead’ sisters heads? Is it in some  ”How to be super dramatic” guide book for villains? Nevertheless, I am curious as to where exactly this story is going to go given Lana’s current state of mind/body.

Lana’s clearly been through ”some shit” and I hope I enjoy reading the rest of this story once I know more about her/the world she’s apart of.

”You’re never going to be good at that so why don’t we just enjoy the moment quietly.” 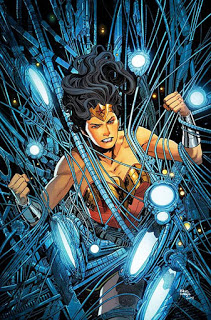 I feel like I just stepped into a Doctor Who episode because this issue was super freaking dramatic and had a weird cliff-hanger. I’m not saying that’s a bad thing, I just got some massively sad Doctor Who vibes by the end of this issue.

As a whole I’ve been enjoying this Wonder Woman Rebirth run. It’s chaotic, it’s powerful and it’s sappy at times but as a whole, it’s an enjoyable series. The art is something I’ve grown to love though the covers tend to be ”cooler” to me than the series’ art as a whole. Nevertheless, this was a good story. A solid one that made last months both make more sense and also give me another gaping hole as to what exactly has been going on in Diana’s world. The confusion doesn’t bother me as much as it probably should given Diana’s state of mind for the past handful of issues.

”Call it the Wonder Woman effect.” 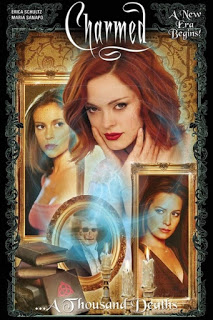 So this comic made me feel nostalgic for a television series that I actually have no idea how much of I’ve actually watched. After a quick IMDB search I now know this show was on air from 1998-2006 so I was freaking four and watching this show was on it’s first season.

Charmed is one of those things that I remember frequently watching as a kid, thoroughly enjoying but also not really understanding all of it because I was a freaking kid watching a show that was not exactly my age demographic. I remember loving this world, loving the magic and wanting to be one of the Charmed Ones because really, what little girl doesn’t want to secretly come from a magic line of witches and have some badass sisters at her side? Well, I know I sure as Hell did as an only child. The house was amazing, the graphics were cool for me and even when things were dark, the girls persevered, they always persevered.

This comic was probably easy for me to read because I knew who the girls were and Leo. The one thing I didn’t get is that I have no actual idea where this is taking place. I don’t know what season this could be during or if it’s after or if it’s just simply like the comic says and based off of the television show. Either way, I did enjoy what I was reading and felt that the art was pretty fitting for the Charmed world. 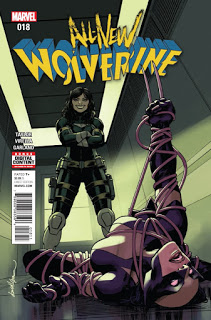 Anyway, now that I’ve got that out of my system, let me say what I feel needs to be said about this fantastic end to the ENEMY OF THE STATE story-arch. Freaking Laura has been destroyed by Kimura, emotionally and physically for years has finally been dealt with once and for all ’cause Laura figured out how to kill her at last. I’m proud of my baby girl for doing what needed to be done. I’m also relieved she didn’t just let S.H.I.E.L.D. lock her up, she just out and drowned the damn bitch. I also want to high-five Gabby, Angel, Gambit and Jean-Grey for being her back-up this issue. Even Tyger was helpful in her own special way.

This is one of those series where I’m so ”proud” of my fictional babies. It’s such a crazy ride and just has generally amazing girl-power all over the damn place. I’m also excited to see Laura in her new costume for something other than the pre-released photos. I can’t wait to find out why she’s changed the color scheme or if it’ll even be mentioned. I hope we get the reason though. 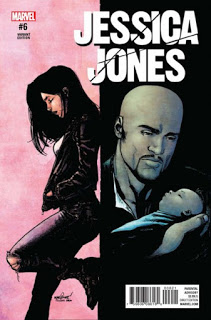 So, this issue tied up Jessica and Carol’s little ”black-ops” situation that this series has been focusing on since issue two and I loved it. Don’t get me wrong, I do like Carol Danvers but that doesn’t mean I didn’t enjoy her getting trash talked by Alisson for a bit. I’m also hoping Spot comes back at some point just because the art for Spot is hysterical and everyone’s always so damn angry when they get hit by him. Which I mean is totally understandable because they pop up out of nowhere and I’d be 100% pissed if I got randomly punched and couldn’t hit back.

Jessica Jones is an amazing character who always needs a hug and booze. ESPECIALLY now that Luke has Danni again and she’s clearly not doing okay after her original cases husband freaked her out about the whole other worlds situation. This is one of those series with a slow burn but one that I’m okay with being a slow burn because it makes the revelations and resolutions stronger in my opinion.

”It’s because you have no dick! Asshole!” 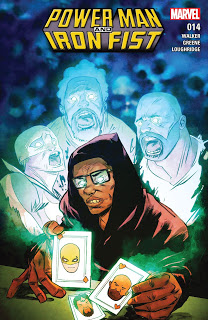 I have to admit, I’m still adjusting to Alex being a villain even though I know he’s the one that has such a dark journey in the Runaways comics. Nevertheless, I am enjoying this story-arch. I’m honestly just so happy to be so far away from the Civil War 2 story-arch and dealing with the Luke/Jessica drama that I’m enjoying the fact both series are at least making reference to what’s happening between them. It’s also being done in away that doesn’t totally go against precious continuity even though it is just really worrisome because I was thoroughly enjoying cute as fuck Jessica and Luke together in this series.

One thing I loved about this issue is how done with magic/drugs Danny is right now because of Alex. I can’t wait for the boys to have there show down with Alex. I’m also loving the diversity of this series as well, so woohoo representation!

”You’d be surprised what I can imagine, Jennie. Like right now. I’m imagining whatever is in that box and how it’ll feel when I introduce my foot to its ass. And it won’t be a casual introduction. I’m gonna treat whatever it is the same way I treated Doctor Doom when he owed me money.” 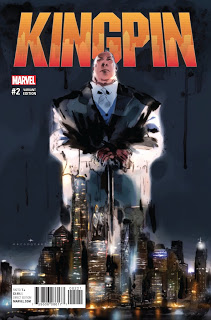 I meant to keep up with that Kingpin Civil War 2 mini-series but that was an epic failure so I told myself that when this series started last month, I’d keep on it. Now, with issue two that I’ve successfully read I can say that I do thoroughly enjoy this series. Kingpin, like the Bullseye series is focusing on one of Matt’s most chaotic villains/rival. Wilson Fisk, at least this lovely comic style is an overwhelming presence. He’s gigantic in more ways than one with his effect on New York City. Wilson is also complex enough that I enjoy him in both this series and his appearance in Daredevil seasons one and two (though Frank Castle and Elektra were by far way more threatening to me in comparison) enough that I’m reading this series.

Kingpin’s current series is focusing on Wilson and Sarah. This months issue established more of Sarah’s life as she tries to pick up the pieces of her crumbling life. Wilson just wants his book to be written but this issue things didn’t exactly go all that well for our clearly future lovers. I’m all for Wilson and Tombstone fighting albeit briefly this issue and for another Daredevil cameo. Can’t wait for Sarah to figure out who Daredevil really is.
”That isn’t weakness. It’s humanity.” 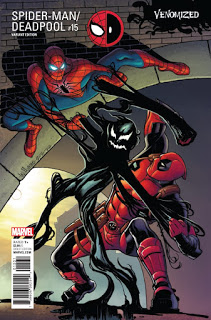 So I didn’t know that Blade was a Marvel comic-book character. Nor do I really understand how Peter went from ”MUST KILL ITSY-BITSY” to what we have here in this lovely event. Don’t get me wrong, I’m 100% okay with me getting some of my favorite sassy Peter Parker that Spider-Man/Deadpool has given me for the past fifteen issues but I’m a little on the confused side. I read Deadpool issue 28 right after I read this issue but I’m still a little mixed on this.

Nevertheless, I’m loving this story-line. I mean come on, you’ve brought in a Van Helsing AND Blade. My vampire loving nerdy childhood self is so happy over this. The amount of posters Cami has is about the amount I have on my wall for Constantine to be honest and my scattered movie posters. I’m not exactly thrilled with the fact I’ve got to read Deadpool & the Mercs for Money #9 along with my regular Spider-Man/Deadpool comics but I’ll ‘deal’ with this. I’m a sucker for events like this one though so I’ll just have to go along with it and read more Deadpool this month than I normally do.