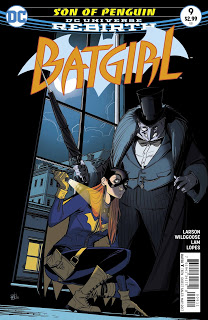 I’ll say it before and I’ll say it every review, I LOVE BABS, SHE GIVES ME LIFE AND IS LIFE GOALS!

I 100% appreciate the fact that Bab’s is aware of her kind of crap taste in romantic en-devours because it’s nice to see a character actually learn from past mistakes. Or at least be aware of the mistakes and try not to repeat them per-say.  Also my hats off (no, it’s not a bowler hat but it should be) to the writers for having Alysia and Jo’s insemination plot-line not be ignored. That it’s still apart of the story-line and that Bab’s is trying to be as supportive as possible, it just makes me giddy that it’s something that the writers aren’t ignoring. That they clearly put thought into it and aren’t ignoring any of the LGBTQ characters. Go Batgirl writers yet again.

Over all, I’m enjoying this whole Son of the Penguin story-line because it’s playing off of so many on-going apps and current issues in a fun and refreshing way that’s enjoyable but still educational without being shoved down our throats/shoved in our faces.

”Okay. Libraries are community anchors for low-income residents. But what do tech bros need them for? Maybe if we add a craft cocktail bar to the reference section.” 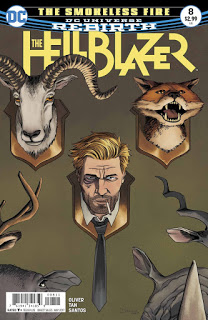 Holy crap the art this issue really grew on me. ESPECIALLY when Mercury was talking to her lovely captive creep. Mademoiselle Misabel looks to me like an older Teen Titan’s Raven meets like Shego from Kim Possible, so you know she’s gorgeous and is totally out of John’s league but clearly, they’ve slept together at some point. Because you know, John’s just a charming asshole.

I really do love Mercury and I’m truly happy that she’s involved in this run of the series. She was an amazing character in the old Hellblazer days so it’s nice to see her all grown up now and get to have this new type of relationship with John. It’s kind of rare to have John deal with some of the mistakes from his past and not have them directly be some type of villain or an actual ghost haunting him. Mercury is a different playing field for John to deal with and I appreciate that she’s not instantly trusting him or telling him what she’s doing. She has every right to be acting the way she is but I’m still excited for the moment when John finds out about her secret captive creep.

I hope Misabel comes into play again in this story just because of the way John and Mercury dealt with her gives me hope for some sass between the trio.

”But first, a word of warning. That man you are with. He is not to be trusted.”
”Stop the bloody presses.. And for once can someone tell me something I don’t know about John Constantine?” 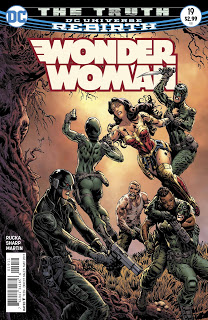 Even though this mixed story-line of Godwatch and The Truth alternating between the issues is both enjoyable and far too confusing for my own liking. I applaud the team for balancing it, I for one don’t know if I’d be able to handle it per-say and I understand that it’s to make the reader to feel as disoriented as Dinah feels but that doesn’t mean I have to like it or agree. Nevertheless, this was another good issue from this series, even if I felt jarred again despite my newfound consistence with the series once again.  I am curious to see how these stories will wrap up and am curious as to when exactly they will tie up the lose ends.

”Thank you for your attention and care. I am feeling much better, and will be checking myself out now.”
And
”What I do know is that how we see ourselves is who we become.” 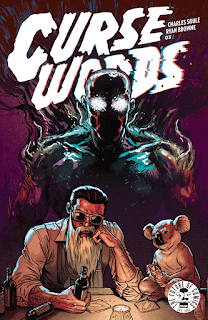 So uh, I thought this was a super short series and apparently it’s not so WOO-HOO MORE CURSE WORDS! FUCK YEAH! Sorry/not sorry, had to say that.
I LOVE THAT THEY SPELL ‘MAGIC’ ”MAJIKAL”, THE WORD MAGIC MAKES ME HAPPY WITH ALL OF IT’S DIFFERENT SPELLINGS AND I’M A SUCKER FOR THIS VERSION.
Seriously though, what’s not to love about Curse Words? Both actual curse words and this series if I’m being honest. Wizord is priceless, the fact he’s got Margaret around to help his life and the ever looming Ruby Stitch on her way to reek havoc all over New York City is super exciting to see. I can already tell that the duo reuniting won’t go all that well for Wizord mentally speaking but am seriously all for it to see how it plays out. I CAN’T WAIT TO SEE WHO TRICKS WHO WHEN THEY FINALLY COME FACE TO FACE! New York will ”never” be the same again, I can just tell.
”There she is. Ruby Stitch. Man, she looks mean.” 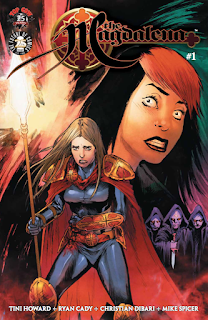 So, I’ve read anything involving the Magdalena character before and now I have a mighty need to pick up some trades ASAP while I wait for issue 2. This issue gave me massive Tokyo Ghost vibes by the art style and had the tone of both the older John Constantine The Hellblazer and Wolf series’s. Therefore, it’s easy to say that I’ve got massive heart eyes for this story and can’t wait for next months issue. I’m far from religious but I always appreciate stories like these because they examine everything with a freaking magnify glass, nit-picking at everything. Making characters demand answers for the wrongs they’ve felt happen to them, exorcising demons, you know, a normal Sunday night.

I can’t wait for Patience and Maya to really deal with each other. I can already tell that Maya’s mom is going to lose her shit over her 18 year old daughter hanging out with a 32 year old Christian exorcist/Buffy the Vampire Slayer esq. woman. I can totally see Joss getting inspired by this series at some point or another since apparently it’s been around forever. It’s safe to say though that The Magdalena has a new loyal reader for as long as this series goes on for. 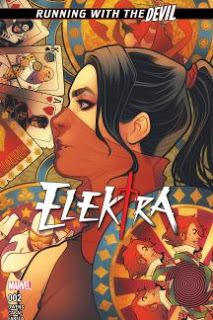 SO THIS ISSUE MADE ME THINK OF MAD MOD FROM TEEN TITANS AND I’M 100% OKAY WITH THAT. I FUCKING LOVE GAME THEMED VILLAINS. I AM SO FOR ELEKTRA DEALING WITH THIS CRAZY VILLAIN. HE’S SO CLICHE BUT I’M IN LOVE.

Okay, I’ve got the Caps Lock out of my system.

This is such a fun series. I’m all for it. Everything about it is glamour, glitz, dramatic monologues and MURDER. So you know exactly what I needed to read after being up since 6:30 for work on a Sunday. Elektra is on my long list of fictional loves and I’m as giddy as can be that both her and Gamora have series right now to fill my Mockingbird void. This is clearly going to be one of the trades I see myself owning as soon as it’s out. The art is some of my favorite styles and Elektra is such an enjoyable leading lady that I can’t wait to throw this comic at people to demand they read it and enjoy it with me. Go out and get yourself a copy ASAP if you haven’t already.

”I’m trying to think, but your voice and your haircut are too loud.” 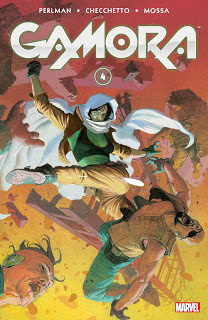 I really love the art for this series, it’s so ”bright” which shouldn’t work for the series and yet it does. Gamora and L’Wit just get better with each passing issue and I’m curious to see how the relationship will continue to develop as the series continues. I hope this series isn’t just some short and is selling really well so I get more than just say eight months of this series, I want this series for AT LEAST one year. Give me more of Gamora being like this for as long as possible, trying to figure out what she is without revenge as her driving force pre-Guardian’s of the Galaxy growth, please, please, please, Marvel, give me this one thing.

This story is still on the simple side but that’s fine by me because I keep on getting 1) Several epic fights, 2) Witty comments from Gamora 3) Flash-back type scenes of Gamora as a child as well as L’Wit and 4) Crazy cult stuff. AKA, all things I thoroughly enjoy.

”Even if you are my long-lost family.. I suggest you remove your hands from my shoulders, or I’ll remove them for you.” 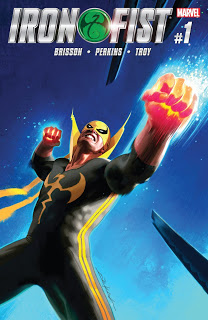 Oh Danny boy you lil shit feeling all bad because you haven’t had a good fight.

Anyways, now that I’ve got that out of my system, onto the review. This was an OK issue to me for the first in a new Iron Fist focused series. This set up Danny’s current state of mind and established his new journey. I didn’t really have any specific expectations going into this issue compared to the Netflix show so that helped my view on it. I love Danny Rand, he’s far from perfect but he’s always enjoyable. I really enjoyed the art for this series and am curious to see how it goes for the rest of this story arch. I also appreciated the Writers/Artist page at the end of the issue to introduce the team behind it. They seem like a fun bunch and I’ll be sure to stick around for a few more issues to see where this story goes. Danny’s got a long history, one that I honestly haven’t touched so this feels like a good jumping point for myself and others to read. 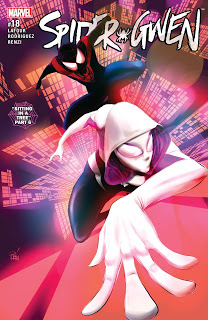 Is it bad I’m relieved this crossover event is over? I just want to go back to my normal Spider-Gwen series, not all of these freaking crossover events. It was cute but damn, I just want to go back to Gwen’s crazy life, not Gwen and Miles crazy romantic buddy comedy family drama thing.  I also wasn’t all that fond of the ending for this event either. It felt rushed despite the fact this event was actually pretty long between both of the series. As a whole, it was cute but I honestly didn’t miss anything from not touching the Miles issues. I’m not exactly sure if that’s a good thing or not for the storytelling either.


If you are in love with the Spider-Family this event’s probably more for you than it was for a reader like myself. At times I felt like I would’ve enjoyed it more if I read both Miles and Gwen’s series, not just Gwen’s. Nevertheless, read the event, you’ll probably laugh more than I did but that’s just me. I’m not exactly a massive fan of Spider-Ham so this wasn’t really a favorite thing for me.