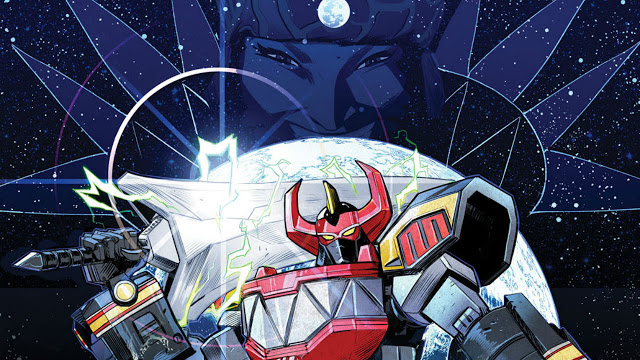 Saban’s Go Go Power Rangers is set after the first episode of Mighty Morphin Power Rangers and centers around Jason, Kimberly, Zack, Trini, and Billy as they navigate high school, just days after receiving their superhero abilities. The story delves into their lives of saving the world while juggling history tests, dating and after-school jobs.

“It’s hard enough being a teenager and juggling relationships, school, and family—I can’t even imagine throwing in protecting the world. The goal of Saban’s Go Go Power Rangers is to focus on more personal, intimate character stories. We dive deeper to fully examine the wish-fulfilling, awesomeness of having superpowers, along with the pressure of that responsibility.”

“The Mighty Morphin Power Rangers was one of my first exposures to the superhero genre, and a big part of the appeal was the lives of these characters when they weren’t saving the world. Ryan [Parrott] and Dan [Mora] are incredibly adept at capturing both the awesome cosmic action of being a Ranger, and the emotional reality of being a teen at the same time.”

“Mighty Morphin Power Rangers was the ultimate TV show. It had dinosaurs, cool heroes with amazing suits, and giant Zords. What’s not to like? I can’t wait for the moment to travel back in time and tell my younger self what I’m doing. I’m sure he will be proud of me!”

Join us tonight for a new episode of Comic Book Weekly, and be sure to follow the Prelaunch Page for our #Kickstarter launching in 7 days!

In 1 week, we are launching a #Kickstarter for an audio version of our weekly YouTube show, Comic Book Weekly! Celebrating 7 years of @ComicFrontline! Get notified when we launch here: http://comicfrontline.com/cbw

http://Comicfrontline.com got a new paint job. Gone is the red, here comes the blue! And Kirby Dots (or Krackle)! https://www.instagram.com/p/CKO__iVhuzJ/?igshid=17pl2yjdpxxso