As a member of Action Lab Entertainment, I’ve been helping with their latest Kickstarter for the Eisner-nominated Athena Voltaire. The story follows the globetrotting pulp heroine Athena Voltaire’s adventures. Writer Steve Bryant and Action Lab Entertainment are making a new ongoing series starring the titular heroine. I spoke with Steve about what we can look forward to from the new series.

Athena Voltaire was originally a webcomic; it was nominated for a Best Digital Comic Eisner in 2005. The story would continue in the Athena Voltaire Compendium and the mini-series Athena Voltaire and the Volcano Goddess. Athena Voltaire travels the world, kicking Nazi butt, exploring unknown terrain and discovering ancient artifacts.

Steve Bryant is an Eisner, Manning, and Harvey Award-nominated writer and artist of Athena Voltaire. He co-created and wrote another Action Lab title, Ghoul Scouts, as well as contributed to several other titles like Hack/Slash, Hoax Hunters and Steed and Mrs. Peel. Bryant has also done work in the roleplaying game industry. He will be working with artist Ismael Canales and colorist Emily Elmer on the first arc of Athena’s new series, Athena Voltaire and the Sorcerer Pope.

I spoke with Steve Bryant’s about his pulp heroine and her past and future adventures:

Me: Athena Voltaire has already been around for a long time as a webcomic and has had a mini-series and compendium too. Why did you decide to turn it into an ongoing series, and how will this be different from previous Athena Voltaire books?

Steve Bryant: We’ve had some stops and starts with the book at our previous homes and I felt that the best way to reestablish the series was with an ongoing story. There’s a lot of Indiana Jones in Athena’s DNA, but there are so many other cool period sources that we can integrate into the book, too. With an ongoing series, we can vary the formula a bit, incorporating elements as varied as horror, screwball comedy, and film noir into the pulp adventure. Plus, it gives us the opportunity to develop an overarching story arc.

Me: For people who have never read an Athena Voltaire comic before, what should they know about the series?

Bryant: The series takes place in the mid-1930s. Athena Voltaire is the daughter of the Great Voltaire, a stage magician. She grew up traveling with her father, learning various skills from her dad and some of the acts he travelled with.

As the ongoing series begins, Athena finds herself between two opposing forces seeking mystical power from the hollow earth—the Brotherhood of Shambhala and the Nazis. She’s allied with a British Intelligence agent, who may have his own agenda, as well.

Me: What are some of the future story arc we can expect to see in the Athena Voltaire ongoing series? Not just the first story arc mentioned on the Kickstarter, but future arcs as well?

Bryant: The second story arc is Terror on the Orient Express. Like the name implies, it involves a mystery on the famous train. Instead of a murder mystery, though, it’ll be more like Alien—except set in the 1930s, on a train, and not involving an alien. 😉

I’m tentatively planning the 3rd arc as another globetrotting adventure, and arc #4 to be set in the Hollywood Hills, but both are subject to change, depending on how the larger story is developing.

Me: How would you describe your pulp heroine Athena Voltaire, and what inspired her creation?

Bryant: The elevator pitch is “1930s pulp adventure—Indiana Jones starring a female pilot.” But if we’re going deeper, it comes down to entertainment that I love: Dave Stevens’ Rocketeer, the banter from the Thin Man movies, the way that James Cameron and Joss Whedon defined female protagonists in the 80s, 90s, and 00s, the art of Al Williamson, Alex Raymond, and Mark Schultz… I’m probably forgetting more, too.

Me: If Athena could go adventuring with another famous explorer, who do you think she would go with and what do you think their adventure together would be like?

Bryant: C. A. W. Monckton. In 1910, Monckton, was attempting to scale Mount Albert Edward in British New Guinea. The legend varies, saying that he either discovered the huge footprints and other indications of a cloven-footed monster, or that he and his party saved a pygmy village from the creature.

In Cryptozoological circles, the creature became known as the Gazeka, and is described as having the snout of a pig and the face of a devil. I think that Athena and Monckton could have a great adventure tracking this creature!

Me: How did Ismael Canales get involved with the project?

Bryant: When we decided to make the book an ongoing series, I knew I wouldn’t be able to maintain the schedule necessary to keep the book monthly. Action Lab president and creative director Dave Dwonch gave me a number of options for artists we could bring on board, and Ismael’s staging sensibilities really impressed me. He seemed like an artist who could make everything epic and cinematic. Seeing his finished pages, I wasn’t wrong!

Me: How did Emily Elmer get involved with the project?

Bryant: I met Emily at Emerald City Comicon. Dave Dwonch (that guy again!) sent her by my table as a potential colorist. I loved her sensibilities.

Bryant: We’re not reinventing the wheel here, but we are filling a niche that no one else is covering right now. It’s pulpy, but it’s also a strong female lead kicking Nazi butt—read into that what you will.

Bryant: This is what I wish someone had told me: Stop waiting until you feel ready. You’re not going to wake up one day and magically feel like your skills are honed and you’re ready to make comics. It’s incremental, it’s a struggle, and it’s hard work—but the sooner you jump right in, the sooner you start down the path and the sooner you start building something.

That may not sound inspirational, but here’s the kicker: every creator you admire has been where you are today, and felt what you feel, and the biggest difference between them and you is that they dove in and took that first step down the path. And the next step. And the next one. And the next one… 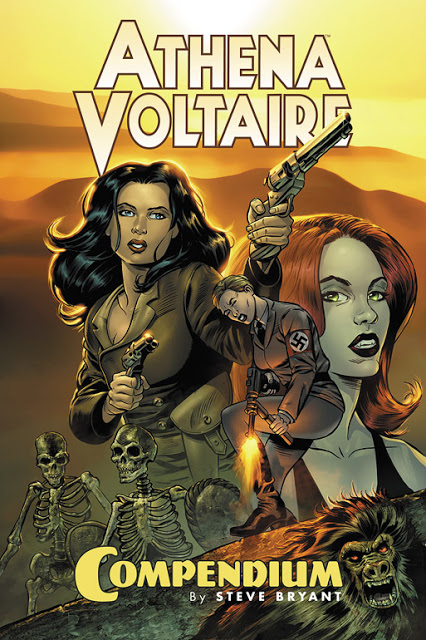 Me: Thanks you for taking the time to share Athena’s globetrotting adventures with me. You can learn more about the project on their official Kickstarter page.