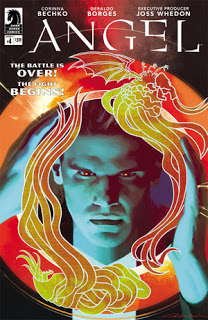 I’ll say it again, I really miss watching Angel.
Yes, yes, I can watch it on Netflix but I miss the thrill of new episodes. Yes, the comic fills that void but damn this story-arch would’ve been so cool on TV! I want to see Fred like Illarya is in this arch in her ‘true’ goddess form. Plus the race of people she protects would either look awesome on screen or crap. I’m feeling like they’d have the Berserker vibe going for them if it was suddenly being on on MTV. But that is neither here nor there. This story-arch was fun. The art however is still growing on me. I think it’s because I’m just not as active of a Dark-Horse reader let alone the Angel/Buffy-verse comics so I’m basically in love with the covers than mixed on the issues art as a whole so far. Nevertheless, this was a fun ‘cliff-hanger’ ending for this story-line and I’m pumped to see where Angel and Fred end up. By that cover I’m hoping I’m going to see some old-fashion ballroom dancing Angel and Fred ASAP.
”You’re table manners are terrible.”
Bat Woman #2 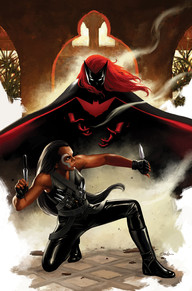 Oh Kate Kane you amazing lady you. I will admit that I did forget what happened in last months issue but this was an awesome follow up to say the least. I’m all for seeing Kate have to get a gang of mercenary’s to get along. Oh the horror, people from her past, whatever will she do but go through an amazing emotional journey as well as kick some serious ass? Oh, the horror, whatever will I do?
So, Kate’s currently solo-ish at the moment. She’s working with Julia but she’s currently not with Bruce and Co. She’s got shit to do damn it and they can handle themselves for a little while without her, right? Probably yes, most likely no. But you know, it certainly helps that James is writing both series at the moment. I’m in love with the art for this series and how vibrant they have Kate’s hair throughout the comic. Now that’s a shade of red to try and hope to get at some point, damn.
”Pain is how the body tells us something is wrong. There is no shame in pain. There is no shame in scars.”
Green Arrow #21 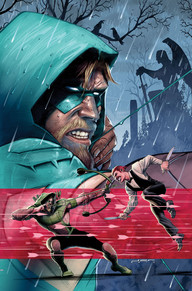 I’m alllll for this Four Horsemen themed story-arch that started this issue. I’m also still a sucker it seems for Oliver Queen monologue-esq moments reflecting about his life. Probably because in my head I’m hearing Stephen Amell read Oliver’s dialogue. Ironically enough though he sounds more like Stephen does when he’s doing his FaceBook videos, not his actual Oliver Queen voice we get in the show. But enough about that. Onto the actual story.
Last issue wrapped up a lovely Roy story-arch and this one continued Oliver trying to save Seattle. Poor guy’s been trying for months and it’s just not getting any better. Or at least not the way he’d like. Baby steps I guess given the fact they’ve made all of Seattle completely corrupt and filled with his creepy issue one masked men. I’m honestly still a bit mixed over the fact we still are dealing with the villains from the first issue of the comic and we’re on issue 21 but I digress. They are a good villainous organization, I just didn’t think we’d still be dealing with them now.
”You’ve got to learn to live with your mistakes, sure, but also regret them.”
Curse Words #4 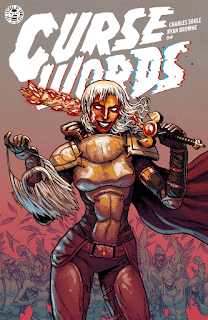 This continues to be one of those comics that I devour every time I get my hands on it. It’s like I HATE FAIRYLAND, where it’s wacky and on it’s own playing field but still a beautiful read. Or at least a super violent weird one that I basically have heart eyes over. Curse Words is something I need in a trade as soon as next months issue comes out. The letter’s page mentioned some new characters coming in issue six, I’m just hoping that I don’t have to wait six months for it to be in my hands. I’ve got my fingers crossed that issue six will be out by June but I can’t say for sure if I’ll be able to use my hands again after keeping them crossed for the wait.
As usual Margaret is the adorable voice of reason in Wizord’s life. The Gothic Castle was an enjoyable setting like every other crazy setting this series has thrown at me. I have a gut feeling that issue five will answer a lot of questions like the CW team says in the letter page but I know it’ll be sure to leave with me dozens more while I wait for issue six after reading issue five. Nevertheless, GO READ THIS COMIC ALREADY, STOP READING MY REVIEW AND GO READ FOUR COMICS BEFORE ISSUE FIVE!
”The mayor is like the king of the city. The rest are basically his men-at-arms. Soldiers, investigators, like that.”
Daredevil #19 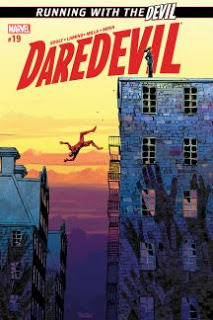 So, I just read last months issue so I could truly grasp this months and damn, this arch is intense. I love seeing all of the other versions of Matt inside his head as if they were different personalities instead of different story-arches. It was by far one of the more powerful story-arches that this run of Daredevil has touched upon in awhile. My hats off to the writers for mentioning the whole concept of being able to break Kilgrave’s hold on you by having a strong will. Shout out to them for letting it be consistent with Jessica Jones both the show and comics. It’s just nice to see that sort of thing staying up to date.
One thing that I was interested in the most throughout this comic was the time-line for Matt and Kirsten’s relationship, sort of forgot about them I guess getting back together? Unless this story-arch is mentioning things that have already happened? I don’t know exactly but I can say I’m thoroughly enjoying it to say the least.
”The entire world goes to Hell, I know about it, I have the power to help. And I do nothing.”
Silk #19 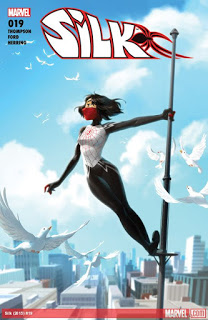 This was a beautiful end to the SILK comics that I’ve had a pleasure of reading since 2015. It took me awhile to get a hold of everything but man, it was an amazing run. Cindy Moon is just one of those characters that sticks to you (puns intended given the fact this IS a Spider-Verse character) and holds on for dear life. She’s just an amazingly relate-able character and I want to applaud all of the #SilkSquad team for making this one of those series that was worth the money I’ve spent on this series since 2015. Cindy’s journey from start to finish has been one filled with chaos, heart-break, and redemption all over the place. It’s brought characters back from the dead in that wacky way that comics tend to do but each time, still managed to hit me hard in the feels. It also gave me a different side of Jonah that I never thought I’d see in a Marvel comic.
Cindy Moon, I will miss your Solo series but I look forward to squealing and taking photos of you whenever I see you in another series I’m reading like I do with Mockingbird.
”No more running from shadows. It’s time to start punching them!”
Star Lord #6 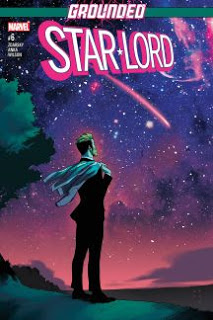 I just caught up on Star Lord from last month and man did that hurt. I’m thrilled I got this issue in my hands to read as well as issue five because that cliff hanger would’ve been nothing but pain while waiting for this issue. What I appreciate most about this is the comic’s catch up page actually tells you where this fits in the other series that Peter’s in. That just pleases me as a fan of reading so many different series that this one actually gives me the information as to where this fits in with the rest. It just pleases me that they let the comic give me continuity.
Now that I’ve got that repetitive word-vomit moment out of my system, onto the review!
Peter Quill is a precious baby that needs to be hugged more often. Especially by Logan in that fuckin’ robe because that was sort of amazing. I honestly love this series a lot more than I expected myself ever to enjoy a solo Star-Lord series. I know it’s all to lead into more Guardians of the Galaxy stuff for the movie in May, not that I’m complaining. It’s such a fun series, the same for Gamora, I also feel like it’d be the same for the Rocket series if I actually stayed up to date on that one.
Another thing I appreciate is the fact we got to see Greg with Matt, Peter and Greg’s bonding over Greg’s adorable father’s death (which I knew it had to happen but it still hurt). Nevertheless, fantastic comic. Great way to end this story-arch without dragging things out. I just want to high five the Star Lord team because damn, solid series so far. Can’t wait for more or at least the Guardian’s #19 issue!
”Your robe is open, isn’t it?”
Robyn Hood I Love NY #11 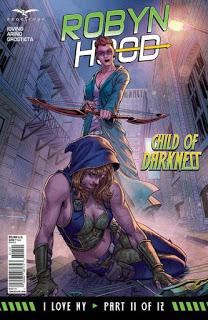 Well, it seems like this month and next month are the ending of of series I’ve been reading for awhile. It fills me with a bitter sweet feeling over the end if another Robyn Hood series but that doesn’t mean I don’t have a handful of other Zenescope comics to get my hands on. I just have some major heart-eyes for Robyn. But can you blame me? Robyn’s journey post her precious series run has been something I’ve had a blast reading for the past few months. She’s a sassy heroin going through her life, adapting to being solo after being apart of team after team for as long as she has been. She’s never had an easy life but this story-arch’s been extra-harsh on her. Which of course is painful to see but man do I love it. I simply love watching Robyn pick herself up and kick some ass even while she’s bleeding all over the place from her attackers. She’s a total bad-ass that they also let be vulnerable and acknowledge her faults. She’s a character that they don’t let see herself as someone that’s perfect. She reminds me a lot of Buffy really.
This issue had me pumped for the conclusion of the I LOVE NY run of Robyn Hood and eager for whatever is next to come.
”Revenge can be like a great martini. Both are delicious and make  you forget your problems for a little while.”
My rankings for the week;
Mimi Schweid Related Links!