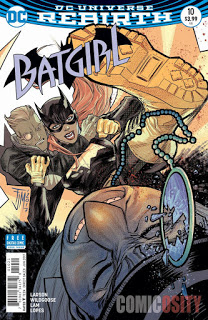 Ethan has quickly turned into the definition of the rich white boy stereotype that our society has given us and I’m loving it. I think that’s simply because the fact he’s the Penguin’s son meant he was bound to be a bad guy at some point or another. He’s also reminding me a bit of Draco Malfoy if he’d been from the later 2000’s, not the 80’s/90’s. Bab’s has enough on her plate and I’m enjoying seeing her and Dick team up to deal with the now stupidity that is Ethan Cobblepot.

This plot line is one of those story-lines that I feel like it’s possibly getting glazed over by casual readers and I hope that changes because, despite the campy-ness, it’s self-aware campy-ness damn it. Bab’s is the one to initiate the break-up before the Intern scene (which I loved, can’t wait for Bab’s to pop him over that), Bab’s is the one who know’s he’s far too good to be true earlier on, that he’s trying to ruin ‘Batgirl’s’ reputation etc. It’s fun and I appreciate the writers for letting this story-line be a thing right now. It’s a simple but thoroughly enjoyable story.

”I think I just found the cure for a hangover.” 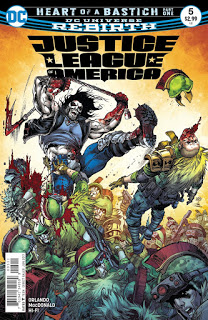 How has it been five months of this series and nothing’s really happened? I just don’t understand. I mean I do, this is another one of those series that because Batman’s involved it’s still going. Don’t get me wrong, I LOVE Vixen, and my girls Black Canary and Killer Frost, the story-arches for them that’s going on in the background this issue makes me happy but as a whole, I’m still not 100% invested in this series. I don’t really ‘get’ why Ray can do that lil armor thing at the end when he’s got the Atom suit but that’s just me. Maybe next month it’ll make sense?

This is truly one of those series that I feel that as of now, I could drop it, pick it back up in another five months and be fine. I’d maybe miss a character death or villain reveal, maybe? I hope that in the future, Batman will go off on his not so merry way and the girls will go back to being in charge front and center.

A girl can dream, right?

”You can’t, heat should hurt you.”
”Wrong. I’ve been waiting for a fix all day.” 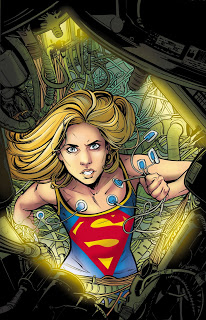 Kara, hunny, don’t go off with strangers you just met. Even if they are cute.

ANYWAYS, I liked this issue. The ending made me kind of sad and I hope things go well in the final issue in June for Kara. She’s got a best-friends death to deal with right now, she doesn’t need this other Teacher shit going on too. Man, somebody just hug Kara and get her away from the boy ASAP. I feel like that also goes well for the TV show but that’s a story for another time.

One of the things I appreciate the most about this short run is how ‘human’ the story is. It’s not a mind-blowing story but it’s an enjoyable, albeit tense read each issue. Kara’s a sweet ray of sunshine going through her high-school phase of questioning her life because she’s really getting to terms with her whole being an Alien thing. Puberty sucks as is, really sucks for her right now. SERIOUSLY, SOMEONE HUG KARA. Or at least the writers, give ’em coffee, tissues and food.  Also hug Kara’s ‘parents’ for being as sweet as they are. Especially after that flash back scene with the fire. Poor Kara’s been caring that weight around for years. 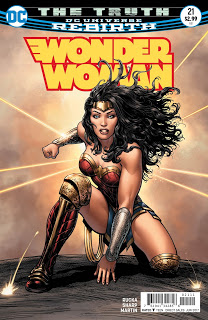 So uh, Ares is hot and chained up. Not exactly something I saw coming. Next issue is a Date Night in VEGAS? I’m both excited and dreading that issue if I’m being honest. Once again, I love this series but am still left with some frustration at the alternating story-lines. I wish the series was just once a month and one linear story instead of two different story-lines that aren’t really crossing over or making much sense when read in the same month. It feels that it is exactly two different story-lines/arches that could be told one after the other after they are each on it’s own until the story gets  completed but the gang has twice a month series so this is what they are going with. Still.  Nevertheless, I’m not on the writing team or have my foot in the door at DC so I can only write a bit of a wining review.

This issue I did like more than the previous one, this one at least had a funny and weird cliff-hanger that I didn’t expect. I do enjoy the changes with the Poison group and all of the stuff with Steve, still get heart-eyes over him calling her Angel when she calls him Steven.

”If it helps, you can tell yourself I am only doing my job, as well.” 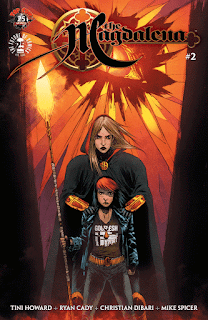 SO, I looked up the trades for the other stuff that Patience has been in on Amazon and I’m totally ordering them as soon as possible.

Anyways, last months issue was epic and made me pumped for this months. Issue two didn’t disappoint either. Maya and Patience got to see our sketchy mage type villain face to face, doing his sketchy thing. One thing I’m already starting to enjoy about the series is the tone of it and how Maya is handling things. She’s being thrown into this crazy world she never knew she was apart of until now and as of now, three weeks in, seems to be doing alright. I appreciate the fact she’s not all bravado and getting in over her head just yet. I’m pumped to find out more about why she’s so into this and why she feels she’s ready to handle it already. Maya and Patience’s relationship is also a fun thing for me to read given the two different types of personalities they have. Something in my gut is telling me that after reading some of Patience’s trades I’m going to love this series even more after seeing Patience’s growth prior to this series.

”I want my Gyro.”
”Aw yes, Dietary restrictions, this is so old school.” 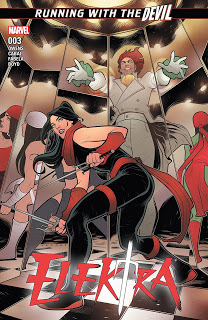 Elektra’s character growth in these three issues as well as her own throughout her comic-life is a slow clap worthy thing that turns into a thunderous applause. If you can’t tell, I have a soft spot for Elektra and can’t wait for her to take down Arcade and his seemingly endless list of players at his disposal. Screwball isn’t the most memorable villain for me, and Arcade is a fun over the top kind of guy but I’m really just here for Elektra’s bad-ass speeches in between her saving/killing people. It’s always drawn so beautifully in everything I’ve read that she’s been in and I have to appreciate the fact that it’s a consistent thing when she’s involved in a story.

Anyways, I’m excited to see Elektra save Lauren, take out Arcade and somehow ended up getting Lauren to own the casino because she’s Elektra and can just do that sort of thing. OR you know, bring Lauren to say Matt and have him help keep her legally safe from the enemies she would have unintentionally made from working with Arcade. Next month’s issue will most likely be as enjoyable and bright as this one was. 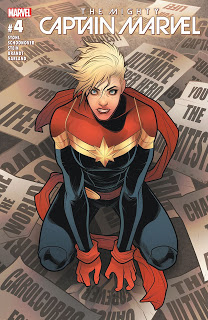 I had no idea Carol Danvers, Natasha Romanoff and Jessica Drew were work-buddy’s. I don’t know why I didn’t know this or why I didn’t just assume these powerful women were friends but damn, I’m so happy right now.  ESPECIALLY after the ending of the issue showing next months cover. Man, that is beautiful. Gamora looks fantastic, everyone just looks so done on it with life.

Anyways, this issue wrapped up the Bean story-line in a kind of neat bow? I’m a little underwhelmed with it to be honest. I have this feeling that Phase 2 of the newly introduced doctor villain will involve Bean being in a materialized/corporal form, that she’ll hate Carol now for (insert villains dramatic reason here) and Carol will be devastated. But that’s just my guess. The thing I enjoyed the most this issue was truly the oh so brief (because it’s neither of there series, it’s just a cameo) scenes with Natasha, Carol and Jessica. I hope to see more of that sporadically throughout this series. Only time will tell whatever cool cameos Carol will have. And how many more weird Hulk type moments she’ll get.

”Punching through the clouds, I remember, this is my glass ceiling. And I smash through it every time. I don’t always win the battle but I will never give up the fight.” 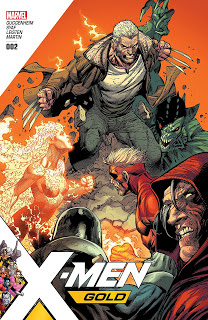 I’m honestly still very disappointed in myself for not reading more X-Men comics prior to All New Wolverine, that random Magneto focused mini-series I enjoyed last year and now this really. It’s just always been so hard to find a series to stick to that I actually enjoyed. X-Men Gold now gives me characters I already know and love in a series that’s even more ‘aware’ of it’s touching topics than I’m used to reading. I know the X-Men have always stood for various things throughout the history of X-Men and thoroughly appreciate that. I’m all for Kitty being in charge of this team and everyone just going along with it because she’s a BAMF strategist. The team as a whole is also enjoyable for me. I’m all for Logan going around kicking ass for the team to get information because I mean, he’s James ”Logan” Howlett.  Kind of comes with the whole Wolverine territory.

Nevertheless, this comic gave me some good feels to indulge myself in. Pride for the X-Men Gold gang for being ever persistent with the current fight with the Brotherhood of Evil Mutants. I’m excited to see where exactly this story-arch will go.

”What the flaming fuck are you doing here, girl?”
”Flaming.” 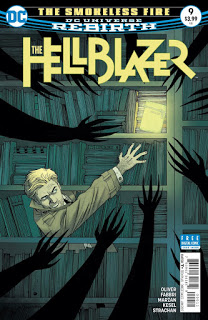 I honestly don’t think I’ll understand what exactly is the DC Rebirth habit of having really long story-lines with all of the series I’m reading right now. That doesn’t mean I didn’t enjoy this issue, It just means I’m a wee bit lost as to why it’s a thing across the board right now. Nevertheless, here are some things I really enjoyed and others I wasn’t super fond of.
Things I enjoyed;
Things I disliked;
”Look at that – is John Constantine getting in touch with his inner nerd? Not sure I would have pegged you as the ”superhero” type.”
”Despite the rumors you might hear to the contrary I’m most definitely not.”
My rankings for the week;