What do you get when you put aliens, rednecks and storage units into one comic book? You get Unit 44, a sci-fi comedy story about Area 51 employees who forget to pay the rent on their facility’s storage unit, resulting in it being sold to two rednecks at auction. I spoke in-depth with writer about his book’s funny bone.

This Kickstarter for Unit 44 collects the previously digital-only four issue mini-series from 2015 into a TPB. It will be published by Alterna and available in comic book stores worldwide. The 100+ page book includes not just the original story, but a new four page short comic called “Memory Lapse” as well as pin-up art by Donal Delay (Death of Love), Stan Chou (Medic, First Law of Mad Science), Loch Ness, Graeham Jarvis and others.

After their storage unit is sold off, the threat of an alien invasion looms over Area 51 agents as they try to get the content of the safe back and save the Earth. The comic book is written by Wes Locher (Hipster Vs. Rednecks, The Undoubtables) and drawn by Ed Jiménez (Backfired, Secrets and Shadows).

I talked with writer Wes Locher about his Kickstarter:

Me: This book combines aliens, rednecks, storage units, and a bunch of other wackiness. What inspired you to bring all these things together?

Wes Locher: This is probably where the old adage, “write what you know” comes into play. I’ve rented a storage unit, I once lived in a place highly populated by rednecks, and I’ve always been fascinated with the ideas of aliens and Area 51, so that pretty much makes me an expert, right? Really, it seemed like a great way to combine several concepts I was sure would make for a humorous ride. If you had sensitive government secrets locked in a storage unit, it came down to who would be the most ridiculous human stereotype to get their hands on those secrets.

Me: If you bought a storage unit, what would you want to be inside of it? It could be anything, real or imagined.

Locher: Honestly? If I won a storage unit at auction, I’d love to cash in one someone’s comic book collection. Not even rare or valuable comics, just a bunch of boxes of things I never got around to reading. Jackpot. If there just happened to be a million dollars tucked away in the back, then you know, that’s cool, too. 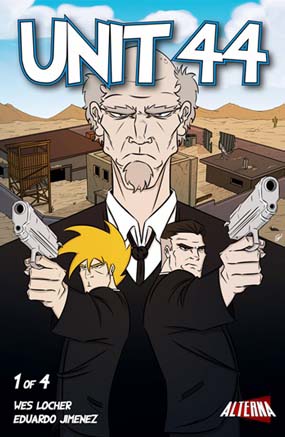 Me: How would you describe the sense of humor in Unit 44?

Locher: I like to think the humor of Unit 44, being completely ridiculous, over the top, laugh-a-minute, slapstick comedy is what the world would have gotten if the X-Files TV show were a sitcom instead of a drama.

Me: How would you describe the main characters in the book?

Locher: The book centers around two bumbling Area 51 employees, Agent Hatch and Agent Gibson. Both are responsible for the contents of Unit 44 being sold off and thus are tasked with recovering the items to prevent an alien invasion.

I found that making these characters complete opposites, but giving them the same goal, made it a lot of fun to watch them travel from point A to point Z on their adventure, seeing how they choose to solve various obstacles and hurdles along the way to saving the world. 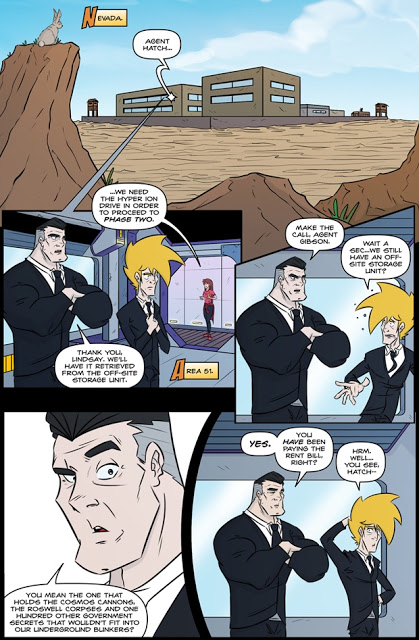 Me: Some of the supporting characters?

Locher: Some of our supporting characters include Senior Agent Ballard, who has a history with the aliens who want to blown up the planet, and tasks (forces) Gibson and Hatch out into the field to recover the contents of Unit 44; Lance Albright, Ballard’s former partner, who has his own agenda with the extraterrestrials; and Chest and Ike, the small town rednecks who purchase the storage unit at public auction and unwittingly wind up in the middle of a giant conspiracy.

Me: If you worked for Area 51, what job would you want to do and what would be your favorite gadget to use?

Locher: I’d take the job where I get to witness all the weird stuff (supposedly) happening there, but from behind the safety of bulletproof glass. I’m kind of a screamer when I get spooked.

As soon as I got my top secret clearance and dental insurance, the first gadget I’d attempt to track down is the one that would let me answer interview questions better. 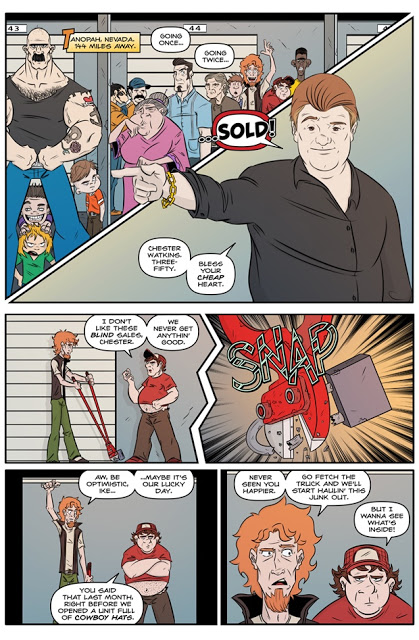 Me: What are some works that you would say inspired Unit 44?

Locher: Aside from the television show Storage Wars, which initially inspired the whole idea for the comic (several cast members of the show have been very supportive of our comic), I was did most of my growing up in the 1990s where buddy movies were all the rage.

Films like Indiana Jones and the Last Crusade, Men in Black, Tommy Boy, Dumb and Dumber, Bill and Ted, and Lethal Weapon all helped to inspire our blend of comedy, action and explosions.

Me: How did you start working with artist Ed Jiménez on this project?

Locher: I had written the first issue of Unit 44 prior to starting my artist hunt, just to make sure it would actually work on paper. I spoke with a few other artists about the project, but their styles were a little too “real” which helped me realize the series would work best with more of a Saturday morning cartoon look.

I spotted Ed’s art on Twitter and reached out to see if he might be interested and sent him the script. Luckily, Ed has the same sense of humor I do and we hit it off great. He took my silly ideas and amplified them to the extreme, adding in his own background gags and helping to bring the visual humor to its full potential. Sometimes I think we were just on a mission to make each other laugh. But when we started making other folks laugh, I think we saw we were onto something.

In addition to being a talented artist, Ed also colored the original four-part series. Because we were the only two creators who worked on it, we can take all the credit for our successes, but sadly have no one else to blame if things go badly.

Ed is an amazing human and friend. None of this would have been possible without him. 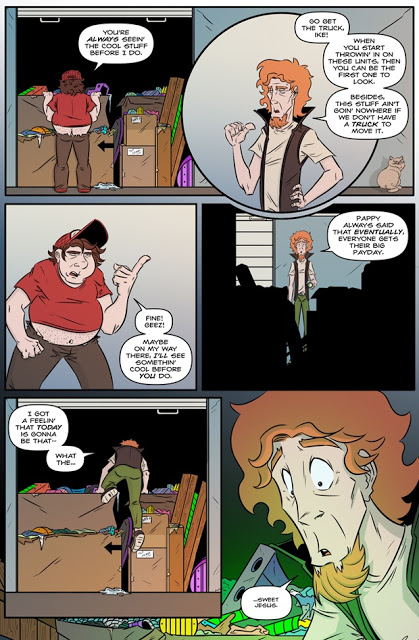 Me: Alterna will be publishing your comic. How did the process of pitching to them work and what was it about that publisher in particular that made you feel Unit 44 was best in their hands?

Locher: Our initial plan was to self-publish the comic. In my mind, it was too “out there” for someone else to get behind. We actually did release the first issue on our own and out of the blue I got a message from Peter Simeti, publisher of Alterna, asking if we’d consider Alterna as a home for the series. So in that aspect, it was the easiest pitch I’d ever done!

The bonus was that I read a lot of Alterna’s titles, so I was familiar with how they did things and was honored to be part of a hardworking indie publisher that I already had a lot of respect for.

Peter has been a wonderful resource to us and without his help and guidance we wouldn’t have the opportunity to even get this series the Diamond Previews catalog and ultimately into comic shops. He took a chance on the series and it’s my hope that releasing the series as a graphic novel will help Unit 44 find additional readers who will not only like our book, but Alterna’s other amazing titles as well.

Me: Why do you think people should pledge money to your project?

Locher: By supporting Unit 44, comic fans will be able to secure themselves a copy of the 100-page graphic novel. Funds raised through the campaign will be used to fund the initial print run made available to comic book shops, book stores, and libraries. Since we’re an indie comic, we’ll be focusing on a very tight print run to start, and anyone who doesn’t claim their copies early may have to wait longer to get their hands on the book!

Aside from that, Unit 44 was created to be a break from dark, ground, gritty comics that tackle subjects you see each day when you turn on the news. It was my goal for this comic book to give readers an escape from reality, even if only for an hour or two, in order for them to have a good laugh and a fantastic adventure. 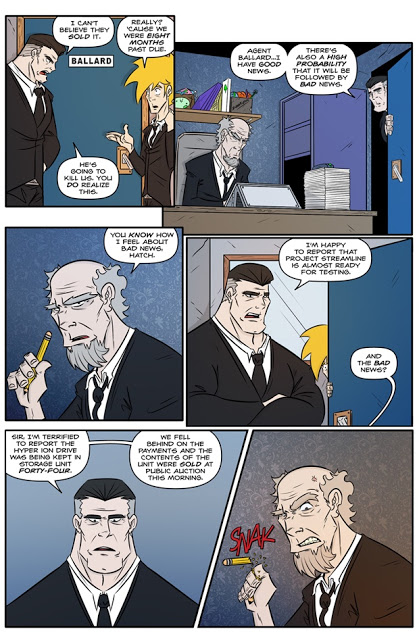 Me: This project was originally cancelled and shortly afterwards relaunched in May. Why did you stop the first Kickstarter and then restart it?

Locher: Our initial goal was to print 1,500 copies of the book. When we saw things weren’t going well, our publisher, Alterna Comics, consulted a new printer they’ve been working with and got an updated quote on the book. We realized that we could get a really good deal on 750 copies and pull down our goal by about half.

We’re already getting orders for the Unit 44 graphic novel from book stores and libraries and it will appear in Diamond’s Previews catalog for comic shops in June. If we can meet our $2,000 goal, we can make sure we’re able to fulfill most, if not all, of those initial orders. We’d prefer not to keep anyone waiting! If we’re able to go beyond our goal with this Kickstarter campaign, we can bump those order numbers up even higher.

Me: Do you have any follow-up plans for Unit 44 that you can share with us?

Locher: Humor comics are still sort of finding their footing with readers. While there are a lot of funny titles out there now through various publishers, I’m hoping readers will see that comics aren’t just a place to get their drama/superhero/crime fix, but also their laughs as well.

If the first volume of Unit 44 continues to grow its supportive readership, Ed and I know exactly where we’ll take it next. And it would be AWESOME. 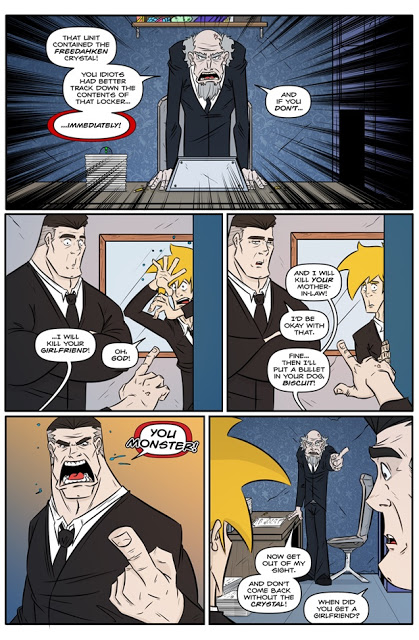 I’d tell them not to worry about what types of stories are hot in the marketplace, but rather focus their energies on writing something that only their unique voice can produce, no matter how strange or off-the-wall it may seem. Be weird, and be unapologetic.

Me: Thanks for taking the time to share, Wes! If you’re interested in learning more about Unit 44, check out his Kickstarter.