This time on “Kickstart the Week(end)” we’re showcasing an original crime noir story, Broderick. Join the writer and artist as they talk about the Chicago underworld and its ties to their story. The creators say fans of Frank Miller’s Sin City, Brian Azzarello’s 100 Bullets, and Richard Stark’s Parker by Darwyn Cooke will enjoy Broderick.

The series takes place during the 1940s in Chicago. The Chicago crime syndicate tries to kill Jack Broderick, a violent member of the underworld. When they fail, Broderick strikes back with a vengeance! The story will span four issues with the option of becoming a 12 issue series.

The creative team consists of writer Ron Bryce and artist Jay Peteranetz. The two have worked on comics together since they were teenagers and released The Prophecy via Panther Comics in the 90s. They are joined by colorist Tony Zollo.

The project will be successfully funded if it reaches $2,500 by July 10, 2017 at 12:00 AM EDT. Rewards include a PDF copy of Broderick ($5) as well as a physical copy with a signed print of the Boss Vito Idani ($20). Other rewards are a sketch on the inside cover by Jay Peteranetz ($25), posters of some of the main characters ($30) and more. Check out the rest of their rewards on the official Kickstarter page.

Learn more about the project from writer Ron Bryce and artist Jay Peteranetz:

Me: What initially inspired the story of Broderick and what do you hope people will take away from the story?

Ron Bryce: This question requires a bit of explanation. When I was writing my first novel, I decided that the story was going to be about how people react to getting diagnosed with a life-changing illness. In the case of Thirty Days From Sunday, this illness was cancer. At the same time, I started writing a novella about a 1940s gangster named Jack. I wanted to write a story about how this violent man would react and change if he were diagnosed with a terminal illness. I fell in love with the original idea and shelved Jack. After I released my novel, Jay contacted me about doing another comic book together and I told him about the story of Jack. We kicked around a few ideas of how to turn a somber story into a more action-focused comic book that also deals with the same issues as the original novella. Broderick was born.

I hope people are entertained by the story, but I also hope they enjoy my take on what a man who has lived a violent and selfish life could do with his final days. This story tackles the issues of redemption and revenge, but also family, love, and friendship. I hope people will love the story and that these themes will really come through with the art and dialogue.

Me: How would you describe Broderick’s character?

Bryce: Broderick is an old time gangster who has worked for Boss Vito most of his life. The mob used him as an enforcer and also as the man who was willing to take any job, no matter how brutal or terrible. He made a name for himself as a real junkyard dog and even though the mob knew he was volatile and unstable, they still used him to nefarious ends.

Me: Using one sentence per character, what are some of the main supporting characters and antagonists like?

Bryce: Fabro Vito Idani, better known as “Boss Vito”, is the main antagonist of the story. Father to Nona and lifetime friend and employer of Jack, Idani has decided that having a killer like Jack on his payroll is no longer worth the trouble that Jack is always causing. 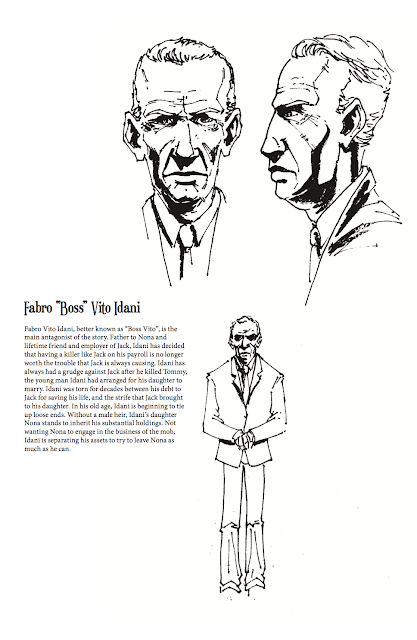 Nicky Spero is the lifetime friend of Jack Broderick. The boys grew up together in the wards of Chicago and when Jack found a way into the Idani organization, Nicky followed him.

Nona is the only child of Fabro Idani and the love of Jack Broderick’s young life. Nona was once engaged to marry Tommy Valario, until Broderick brutally murdered him in a fit of rage. 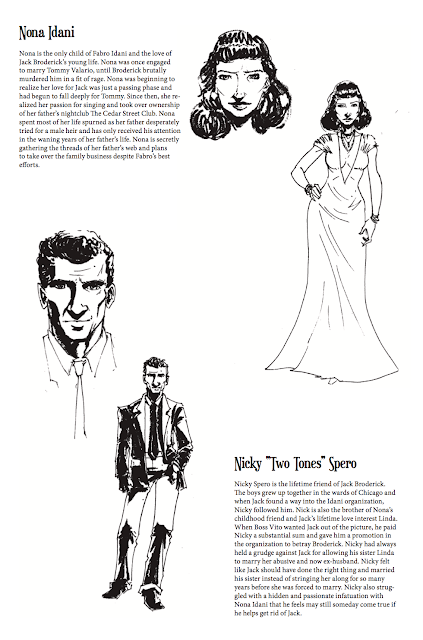 Tommy Valario was the son of Lorenzo Valario, the most powerful mob boss on the south side of Chicago. At the age of 22, Tommy was engaged to marry Nona Idani until he was brutally murdered by Jack Broderick.

Linda is the childhood best friend of Nona Idani and lifetime love interest of Jack Broderick. Once she was known as Linda Spero but acquired a new surname when she married Thomas Mayfield. 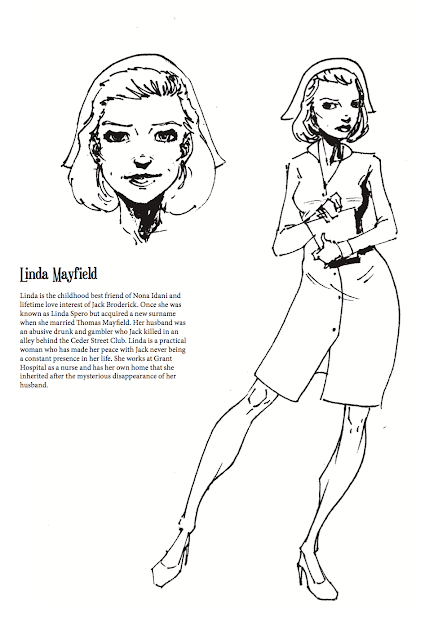 Me: You mention on the Kickstarter page that the story is four issues long but could become a 12 issue series. In what circumstances will you expand the series to 12 issues and if that happens, what can readers expect from it?

Bryce: As long as there is enough interest in seeing this story continue by the fans, then we would love to keep telling it. We have two more four issue blocks planned for if this series generates enough popularity. We want to keep the other two stories a mystery, but I can tell you that the first one is about my personal favorite character.

Bryce: Our love for what we do and our dedication to our small but amazing fan base. This is all a labor of love for Jay and myself. Ideally we would be famous comic book creators and make a living off of this but even if that never happens we would do it anyway. We need the help of those in the geek community so we can keep creating inspired stories.

Bryce: Try to write about things that you love. The worst and most frustrating words I have ever put to the page came out of forcing a story about a subject that I hated. If you need to write about something that you are unfamiliar with, make it a new passion and the words will flow.

Me: On your Kickstarter page you mention how you and Ron have been working on comics since you were teenagers. How did you two originally meet and discover your shared passion for comics?

Jay Peteranetz: Ron’s parents and my parents lived next to each other before either of us were born. We always say that Ron knew me before I was born, and at the very least he knew my family. We have been lifelong friends and he is my brother. We have fought like brothers, played like brothers, and growing up we had chores at both homes because we were constantly at each other’s houses. I had been into comics since I learned to read, and Ron really started picking up comics in high school. We both fell in love with the idea of the mob and comics with Jeph Loeb and Tim Sale’s Batman: The Long Halloween. That book was Ron’s first real inspiration in the comic book world, and it completely changed the way I thought about comic books.

Peteranetz: So far, I love drawing Jack. I struggled early on with getting an older, strong but not trim, and intimidating character design. He has seen the good and the bad of life and has taken to the bad. I needed to portray that from the very moment you meet him. Ron wrote the character so intimately in the preview that we have on our Kickstarter that it was easy to get his pain, suffering, and anger. I can’t wait to keep exploring Jack.

Me: The series takes place in Chicago and New Mexico. When drawing these settings, how did you make them accurate? Did you use references from Internet or have you visited these places before?

Peteranetz: This was twofold: I live in Colorado, so we are only a hop, skip, and a jump away from New Mexico, so I have been there multiple times. Getting the overall environment of New Mexico down wasn’t that hard. Getting the SPECIFIC settings took some internet research on both my part and Ron’s. Part of what I have loved working with Ron is the amount of research he does into a subject before he starts scripting. He gave me links, pictures, writings, cross streets, and more to make sure I was getting the look and feel of both Trinity, NM and the south side of Chicago.

Peteranetz: Of what I have drawn so far, it has to be that final page of the preview. The atomic bomb blast was a… well, blast. Getting the mannequin pieces to fly around the page, getting the ripping of the shingles on the roofs, and the reaction and pose of Jack watching this massive and beautiful mushroom cloud form was awesome. I especially loved seeing the colors on this; Tony Zollo, the colorist, did an AMAZING job getting this page to explode off the page and really leave us with a great starting point for the first issue of the book.

Peteranetz: Mainly, we love comics. We want to surround ourselves with people that love them, too. There is no better way to connect with your fans, both old and new, than Kickstarter. We are able to directly and immediately get feedback and give thanks for the people that are spending their money on us. It is an honor to make a product that people are excited about. We want everyone to know that we do comics for the two of us (it is truly a medium we love), but we want others to join us in the fun. 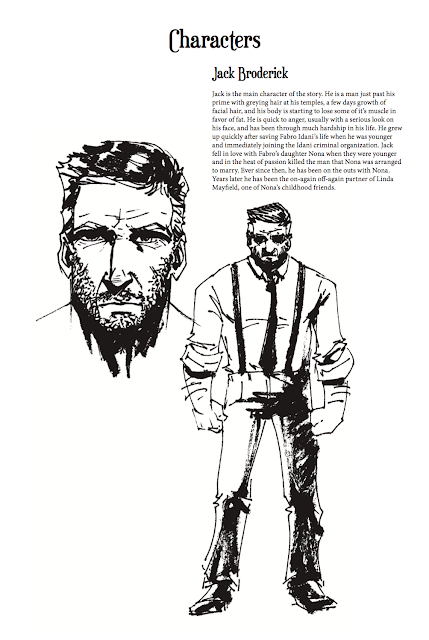 Peteranetz: In the immortal words of Nike: Just do it. I don’t like the people that say, “do what you love and you’ll never work another day in your life.”  I have learned that isn’t true. What I do know is, “do what you love, and you will work harder than you ever have to keep loving it.” And that is true. This is a hard medium to work in, and it’s a hard medium to make money in, but the people that truly love it and put in the time to do it, live a more fulfilling life than anyone I have ever met, and that is true of all professions. Love your work.

Me: Thanks for your time Ron and Jay! Readers, if you want to learn more about Broderick, see their Kickstarter page.