Hi world, my name’s Mimi Schweid and here’s my Rapid Fire Reviews for; Batgirl and the Birds of Prey #11, Supergirl #10, Black Cloud #3, All New Wolverine #21, Wonder Woman #24 and The Defenders #1

Batgirl and the Birds of Prey #11 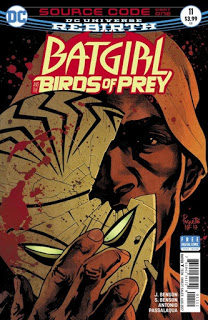 So, like everything else I’m reviewing this week, I had some catching up to do. Damn was it a beautiful catch up for Batgirl and the Birds of Prey. Since Gus was introduced as a character and not a mysterious voice that creepishly knew everything about the team, it’s been established that he’s a bit on the shady side. This issue finally gave us why exactly he’s been acting that way throughout the series. It was a fantastic revelation and I’m happy with how it got revealed.
Batgirl and the Birds of Prey is just one of those amazingly campy series I love to read. It’s fun, it’s always heartfelt, the character growth for Babs, Dinah and Helena is something that makes me giddy each issue and the villain cameos are always super enjoyable. I get ‘heart eyes’ over how well the girls work together, how while they were furious with Gus, they didn’t hold it against him when he told them what he’d been up to and about his bipolar disorder. It just filled my little nerdy heart with glee and makes me happy that little kids will read this and see that sort of topic being handled so damn well.
”Just because you don’t have physical pain, doesn’t mean you aren’t suffering.” 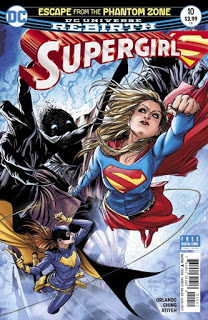 I keep on forgetting that Kara is currently in high-school and Bab’s is kind of in her master’s program. But because of how they are both drawn, I sometimes forget Kara’s 13-14 right now. It does nothing for the story, my inability to tell the age difference, I just have to say I forget until Kara makes a comment about being in high-school.
Kara is an adorable ray of sun-shine, which I must always snicker at given the fact she does get her power from the sun. But seriously, she’s fantastic and I love her out-look on life. I appreciate how her and Bab’s work together in this issue using each others strengths with the friend whose name I don’t remember. Either way, I appreciate the pep-talks and just how the three work together to get out of the sticky situation they’ve currently found them inside the Phantom Zone.
”Psi is in pain. Xa-du hurt her. I can reach her, I know it. Sometimes you are right, Batgirl. But sometimes, diving in is the only option.” 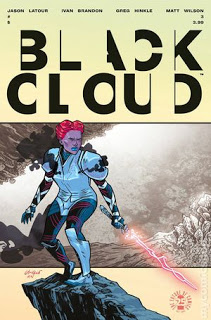 THIS SERIES IS SO PRETTY AND DRAMATIC. I love it, I love that every Image comic I read is always on another level compared to all of the other comics I read. The art’s always better, the stories are stronger and I’m usually much more eager to get another Image issue under my belt than my token DC & Marvel comics. The only downside is the breaks in Image are always painfully long. But that is neither here not their, this issue was as beautiful as the first two issues.
I feel like this is one of those series that I will own a trade for it and recommend it to everyone to read while we wait for the next issue when a hiatus takes place in a few months. I’m already recommending this series to people, I just have an easier shot when it’s in a trade to make it happen.

”Your past is a story. The future is blank.” 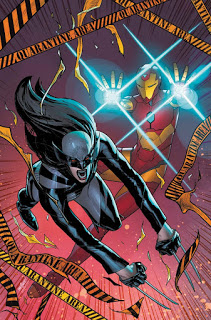 So, the last time I reviewed All New Wolverine it was when the Roosevelt Island virus (Laura Kinney) virus was spread. I caught up quickly on last month and this months issue and man, I was not disappointed.
One thing I continue to applaud the All New Wolverine team for is the perfect balance of serious and camp style that this series has. This issue gave me reunions, closure and new friendships I didn’t know I needed until now. And yet, I finished this issue, despite it’s seriously dramatic ending, smiling from ‘ear to ear’ at how damn good it was.
The fact I get to see Laura be emotional with Gabby, that I get to see Wade Wilson be emotional with her and have Logan apologize for the things he’s done, all in a matter of pages/seconds was fantastic for me. I honestly was worried that this was going to be some abrupt ending to the series given all of what was happening but it seems that All New Wolverine will be snikt-ing around for a long time.

‘‘You’re gonna be so grateful when that skull fractures healed!” 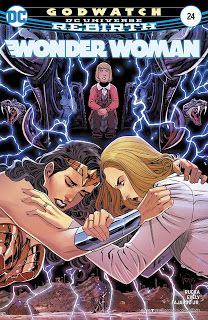 Well damn, just damn. The entire Wonder Woman DC Rebirth series has been such an emotional journey for Diana, Steve and villains like Cale and Cheetah. I love the full circle of Cale and Cheetah’s story-arch’s right now even if they were both painful to read. While I haven’t exactly been the biggest fan of the alternative story-line depending on what part of the month it was for Wonder Woman rebirth, I have, and am, enjoying the story’s. They aren’t my favorite exactly but they are by far some of the most emotionally heavy stuff I’ve been reading.
One thing I have to appreciate is, while I haven’t been the biggest fan of the past two story-arches, I have been a massive fan of how they write Diana and Steve, both together and separately while the two stories took place. It’s a talant I have to applaud the writers for being to pull off. It’s not easy to make a romance work like the way they have throughout Rebirth and yet they have, heart-breakingly so for 24 issues.
”I understand that you see weakness in the places that I find strength.” 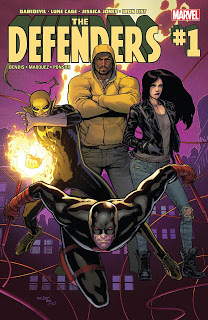 I both love and kind of dislike this comic. It felt like I was missing an Issue 0 to fill in some of the gaps. It was enjoyable, don’t get me wrong, I enjoy Bendis’ writing but it felt a little jarring. I don’t really like coming into comics feeling lost when it starts, I’d rather feel lost at the end of the comic but that’s just me. I am excited to see the team working together and for Matt to own up and tell the gang he’s Matt Murdock since Jessica, Luke and Danny currently don’t know that. But I digress, cool issue, not my favorite First issue comic that I’ve read this year but still, set up something cool.
One thing I’m curious about is how long this series will be, will it be a build up to The Defenders and than go past it or will it just be a three to five issue series despite the hype around it for the past year or so? I did enjoy how the team worked together to get info on Diamondback, some of the art for it in the fight scenes was beautifully ‘gritty’ that I love dearly.
”Don’t touch.”

Mimi’s Ranking for the Week;