Hi world, my name’s Mimi Schweid and here’s my reviews for Batgirl #12, The Hellblazer #11, Supergirl Being Super #4, Spider Gwen #21, The Defenders #2, and Robyn Hood Tarot Special. 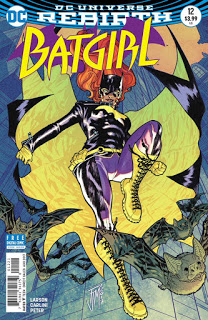 Oh man, I love when Bab’s deals with non-boy related drama. And scientists. This was a simple issue but one that I loved because I’m all for Bab’s going off on missions like this to help things get back to normal. Her life’s been hectic with the whole Son of Penguin arch and all of the chaos in Batgirl and the Birds of Prey so having a simple ”missing person” type story-line was relaxing AF for me to read. It’s something to appreciate and enjoy.

This series always balances humor and drama in a way that I know, no matter what, I’ll enjoy whatever Batgirl comic I get. Bab’s and Kayla was priceless, they made me think of the Ghostfacer’s in Supernatural. Also known as, super campy ghost hunters you can’t help but love. Which I mean really, isn’t that all ghost hunters in any medium? I’d love to see Kayla P pop up again at some point, even if it’s just in Gotham Academy. 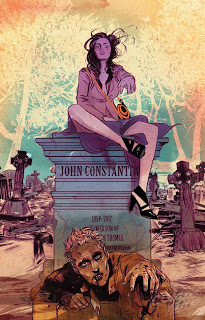 Last month gave us the brief return of Papa Midnite, this month had John with a bit more of a plan. However, we didn’t really get to see all of the plan per-say. John’s been on the ‘mend’ per say since the start of this series due to how things ended from the previous run. He’s been off his A game for a long time and poor Mercury is getting in over her head and won’t involve John. I can’t blame her given there entire relationship. I’m just hoping he’ll get involved before the Dijiin really fuck’s things up for her, you know like possesses her somehow. She’s a step ahead of John in her own special way though so I’m proud of my baby girl and worried about John’s poor life choices once again.

I’m curious to see what will happen next month with John, the ”mystery” man and how things go off for Dante and his adorable sister Sam. Fingers crossed Sam doesn’t get seriously injured.

”Well, last I checked my passport, under profession has me down as ”magician.”
”First off, we both know that that’s a lie.” 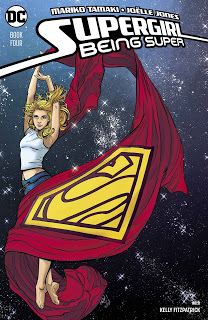 This series makes me wish I got to see Melissa play a high-school Kara. Or at least get some flash-backs to high-school Kara. I love that this series is just so well written. I’m all for Kara’s new journey in Metropolis, I’m curious to see which version of Clark’s she’s going to meet in the next issue, will he know her? The possibilities are endless and I’m honestly very excited to see how next months issue plays out for Kara.

One thing I truly love is Kara’ monologue’s about her life, it’s exactly what a teenager sounds like. The writers are clearly having a blast channeling there teenage-selves, or there children. It’s adorable and I love it because it’s so sincere. I love self-aware teenage commentary from teenage characters. It just makes me grin and hope that actual teenagers reading it, enjoy what they are getting compared to me, a 24 year old, snickering at it all from a different perspective.

I can’t wait to see Dolly pop up after Kara at some point, or at least catch up with her about her museum date because ayyy, go Dolly.

”What kind of messed up teen-rebellion story is this?” 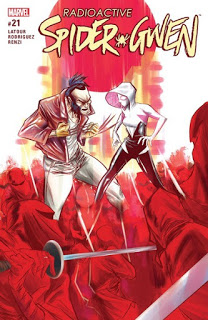 I KEEP ON MISSING THE NEW START TO THE CRAZY AWESOME STORY-ARCHES THAT GWEN HAS. Nevertheless, I was able to understand what was happening just fine because of the catch up page in the start of the issue.

I am once again, worried for Gwen’s safety, slightly annoyed by Harry’s existence and find myself once again wishing for a solo evil Matt Murdock comic just once. I love that Matt’s the Kingpin in this Verse and wish I could see more of it. Gwen is of course, kicking ass as always, or at least trying to. As always, she’s going through some serious shit (aka trying not to get killed by freaking Ninja’s or Logan) while trying to keep Harry from getting killed. I’m also worried for Gwen’s dad, he’s totally going to get killed off at some point and Gwen’s going to be all kinds of alone when she comes home.

One other thing I’m curious about this is how exactly Gwen is going to come out ahead in the end of all of this. Matt is a true force to be reckoned with given his obscene amount of connections and Gwen is so young and not connected in that way. I’d love if Jessica Drew or Cindy Moon came in to help her take him down.

”I have no choice but to choke back my need to vomit all over these robes.” 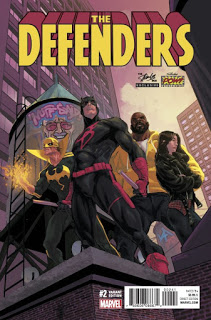 God this was so much better than issue 1. I’m here for Jessica, Matt, Danny and Luke kicking ass and taking names. Or, in this case, Luke recovering while JJ, Danny and Matt go and kick some ass. This was what I wanted from issue 1, I wanted my babies off getting answers and actually getting them unlike last months. Danny off threatning Kingpin thrills me to no end, Matt and Ben working together, Jess just out right beating up Diamondback, yes, give me that. Give me The Defenders all doing what they do best filled with some awesome AF cameo’s like Blade, Fisk, Night Nurse, and more endings like the one we got this month because DAMN that’s going to be great to see how that plays out next month.

I’m also super curious as to how long the gang won’t know about Matt being Daredevil due to the Purple Children plot going on in DD’s series. It’ll be interesting, it’s not that major of a thing but you know, it’s something I’d like to have out in the open given the fact they are going to be a team again. I also love how during the fight with Diamondback they kept on apologizing to each other, it was cute.

”Get out of the city! Tonight. Or I will keep breaking your nose until there is nothing left to break.” 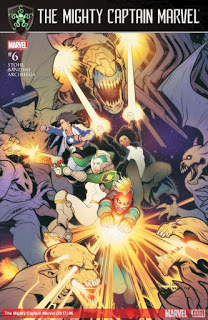 Oh Carol, Carol, Carol, you can’t just get new recruit’s and NOT expect them to sneak out to try and save the world. Over all though, I AM enjoying this new story-arch. I haven’t touched Secret Empire and I honestly don’t plan on it. Nevertheless, I like Carol a lot in this series. I like her team, I like the fact America, Peter, Gamora, Groot, Rocket and that God guy I don’t know are all on the ship with Carol and the rest of her team, the new kids are cute from last months issue, I think I’ll enjoy seeing how this all plays out.

I am sorry for Carol in this current arch, she’s blaming herself for Steve, everyone is kind of blaming themselves and feeling bad because ugh, HYDRA Cap is still stupid AF. I really can’t wait for that to be done and over with so it can stop affecting all of my comics. ‘Cause that’d be greaaaat. I’m tired of HYDRA and the Chitauri (even if they just started last month). I’m loving how the All Mighty Captain Marvel team is handling this cross-over, I just have this thing right now with cross-over’s and events.

”Oh, please. Does this self-loathing thing just come with the job?” 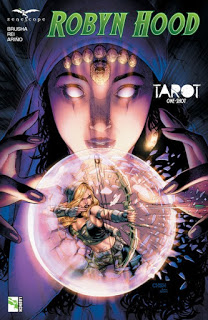 I don’t think I’ve ever experienced reading a comic that was a back-door pilot for not one but two other series. Now I want/need to read the Tarot mini-series, get on Dance Of the Dead and off course, read Robyn’s new story-arch. Damn Zenescope, you are good.

This was a ‘one-shot’ that was also a backdoor for future series. Smart move, very smart indeed. I love Robyn, Mary was super cool from that one issue I read and I’m all for Tarot card themed things so really, they are going to get a lot of money from me this summer and beyond while all three of these story-arches are taking place. Good job guys, one day I’ll have an equal amount of Zenescope on my pull as I have Image, DC and Marvel, one day.

I always appreciate how awesome Robyn is. She’s been through a lot this past ‘year’ in the comics and I’m excited to see where this new journey takes her/find out where exactly she is. I can’t wait to see how Mary’s story will continue to tie in with hers as well in future issues and see when Liesel Van Helsing pops up again.

”Because of her, the city is a much safer place.”

My Rankings for the Week;