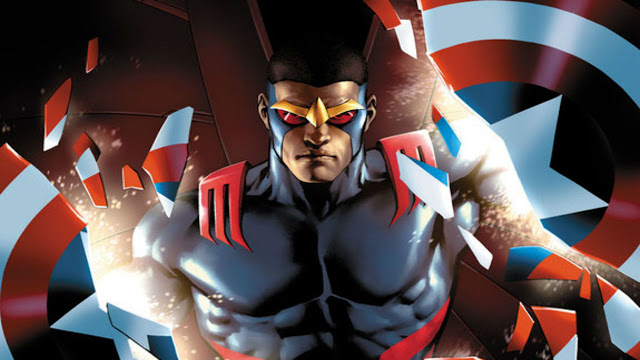 A few titles stood out when Marvel announced announced their first 52 titles launching out of MARVEL LEGACY #1 with their homage covers, one of them was THE FALCON. Ever since Steve Rogers was aged after losing his Super Soldier Serum and Infinity Formula Sam Wilson has taken on the shield as Captain America. Sam passed on his Falcon wings to Joaquin Torres, a Mexican teenager who was abducted by the Sons of the Serpent and used in experiments by Karl Malus, transforming him into a human/bird hybrid using Redwing‘s avian DNA. This lead many to wonder if Sam Wilson would be returning to the skies as The Falcon in this new title, and now we know that the answer is yes and that Peabody and AFI Award-winning writer and producer Rodney Barnes (The Boondocks, Everybody Hates Chris) and artist Joshua Cassara (Secret Empire: Uprising, The Troop) will help Sam “TAKE FLIGHT” in The Falcon‘s first solo ongoing series.

Sam Wilson is officially leaving Captain America‘s shield behind and returning to his original superhero series in THE FALCON #1, launching a brand new series spinning out of the story featured in Marvel Legacy #1.

“At the moment, Sam is in a state of transition. He feels guilty about his relationship with Steve Rogers and wonders if he didn’t pick up clues as to what team Steve was really playing for what else has he missed? So he’s backing away from the limelight for a spell and taking a more grass rootsapproach to making the world a better place. He needs a break and some distance between himself and the role he’s played as of late. He’s disappointed in Steve Rogers and in himself for not seeing the signs sooner. This is a time for resetting the table.”

But Sam‘s return as The Falcon doesn’t mean a regression for the character as many fans have feared, he has grown and will be taking on a sidekick, Rayshaun Lucas the all-new Patriot, who is vital to keeping Sam on-mission.

“The Patriot helps Falcon connect with the Millennial mindset of today’s world. Sam typically deals with his own peer group who sees the world much like he does. Shaun is an optimist and this helps to balance the sense of self-doubt Sam’s going through. There are some similarities in Sam’s relationship with Rayshaun to the one he had with Joaquin Torres, but Sam was in a different place then. Much more the typical authoritarian. Here he’s second guessing himself and Shaun isn’t afraid to point that out.”

Don’t expect him to follow his Captain America politically charged flight path, Barnes plans to shake things up by taking The Falcon out of his normal comfort zone. Sam will be dealing with the magical side of the Marvel Universe and his first opponent in Blackheart, the son of Mephisto, who was last seen in a fight with Miles Morales, in Spider-Man.

“Genre wise there’s a blending of urban street sensibilities with dark magic. Sam’s never been to the place we’re taking him and it’s going to take more than muscle to overcome the obstacles in his path. My hope is that taking Sam out of his typical environment will cause him to use wits of a different sort. The fight now is from the inside out. And since he’s soul searching it felt kind of cool to put him in the spiritual realm. Blackheart was a character I’ve appreciated for a long time. I felt his frustration at being a second stringer on the demon totem pole so why wouldn’t he take his shot at shaking up the world? If a bad kid won’t listen to his parents surely a Demon son wouldn’t take well to conformity either.”

Barnes is hoping that Sam Wilson will have found his definitive place in the Marvel Universe without carrying the mantle of Captain America.

“By the end of my run, my hope is that Sam will be clear minded and focused as to his place in the Marvel Universe. He’s worn a lot of hats over the last few years and that’s sort of disrupted his sense of self. The plan is to restore that. I’d say the tone is more personal and intimate. Often times superheroes become so connected to the missions at hand that they forget there’s a real person under the costume.” 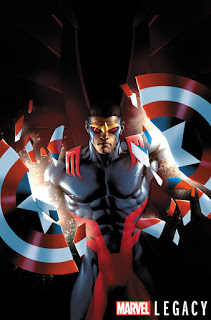 TAKE FLIGHT!
Continuing directly out of the pages of MARVEL LEGACY #1!

Sam Wilson – winged warrior, avian Avenger and one-time sentinel of liberty – takes to the skies again, reborn and recommitted as the fighter for freedom, THE FALCON!

Engaged in an all-new assignment while training his new partner THE PATRIOT, Sam Wilson soars high and sees all. But Sam’s new mission finds him on a collision course with an enemy way out of his weight class—the demonic BLACKHEART! From the stratosphere to the streets, the Marvel Universe now has a high-flying hero circling above them ready to strike!