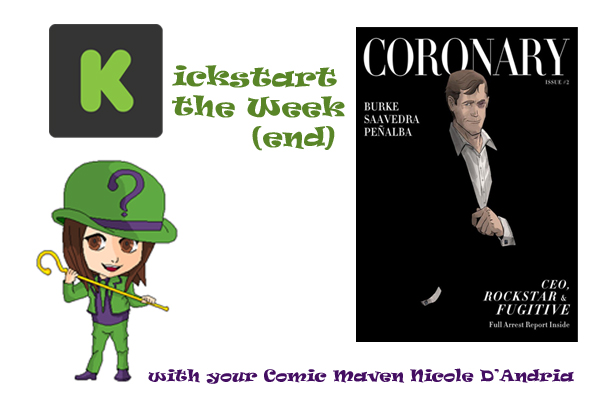 This week we’re featuring Ryan Burke’s Coronary comic book on “Kickstart the Week.” Toted as “Romeo and Juliet meets Black Mirror,” Coronary has something to say about plastic surgery.

In the world of Coronary, plastic surgery is free. The story takes place in London, which is overrun by cosmetic surgeons, lifestyle coaches and pill-pushers. There’s a neurotic businessman who’s trying to learn the meaning of life and love after meeting a freethinking outsider. If he can survive long enough to redeem himself, that is. 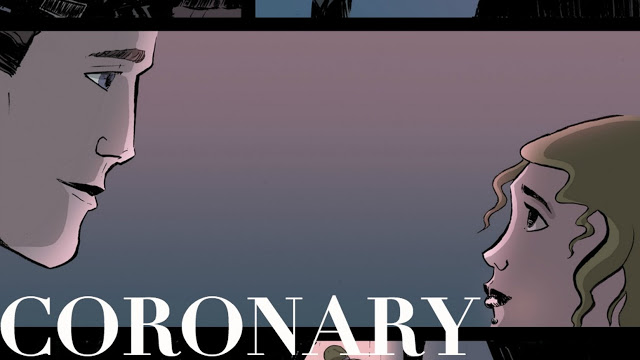 The creator and writer of Coronary is Ryan Burke. He is joined by two artists: Joel Saavedra, who did the pencils, inks and letters; and Damian Panalba, who did the colors. This is the second chapter of a twelve issue series, which is 28 pages long and fully colored.

It will be successfully funded if it raises $4,200 by October 6, 2017 at 1:00 PM EDT. Rewards include a digital copy of Coronary: Episode Two ($5) as well as a digital copy of episode one ($7), a physical copy of episode two ($10) as well as a limited edition signed copy ($15), and get mini prints ($30), among other rewards. Backers can also get an hour long skype session with writer Ryan Burke ($200). Interested in backing the project? You can on their official Kickstarter page.

Me: For those who haven’t read Coronary: Episode One, what do they need to know about that issue to understand this one?

Ryan Burke: In short, our two main characters, Justin and Luna have met for the first time. Justin wants to meet up again, but is cut short via a SWAT team breaking in on a meeting. His best friend, Oscar, is arrested with him. That’s about all the main events of the first episode.

Me: What inspired you to write about plastic surgery in particular?

Burke: I always felt that plastic surgery is at most a reaction to an image-centric world. One that tells us that we’re not thin enough, or not shaped in the correct way. Plastic surgery is, in essence, an effort to be accepted by your own insecurities. I really wanted to push that to the extremes, to exaggerate, and get at the heart of the issue. I want Coronary to show that image isn’t everything.

Me: You say this story is “Romeo and Juliet meets Black Mirror.” What about it makes you compare it to these works?

Burke: Romeo and Juliet is about people from different walks of life, trying to connect. Justin is from business, Luna from authenticity. Those two rarely intertwine, and I want to see them go against each other. Black Mirror is the finest in dystopia, and that too exaggerates elements of society, and really shows us our own true colours. I want Coronary to do the same.

Me: What can you tell us about the main characters, Justin and Luna?

Burke: They’re very different. One life was gifted and full of opportunities, the other not so much. And as we’re all aware, the events of our lives have a way of shaping us into very different people. They won’t kiss in the end, let’s put it that way, haha.

Me: Why did you pick London as the setting? Do you have any plans to explore other countries in the universe of Coronary in the future?

Burke: If anything happens, it happens in London first. I feel that the heartbeats of the city match the ultra-fashion dystopia story of Coronary just fine. We actually branch off into Berlin for Episode Three, but I don’t want to give too much away. And there may or may not be Coronary: True Son in the works. But that’s just a working title for now!

Me: You mention Coronary will ultimately be 12 issues long. How did you decide that was the number of issues the story called for and have you already completed the scripts for each issue?

Burke: I used the collected comic form of graphic novel as a format for how I structured the whole story. While other creators aren’t as particular about their story arcs, I am very particular with the pacing of the story. (Some may call it neurotic!)

Me: How did you meet and come to work with Joel Saavedra and Damian Panalba on this project?

Burke: I met Joel through an online forum, and Damian is the new guy on the team, but still appreciated! Initially I approached Joel for the commission on the first five pages. Damian is under the same mentor as Joel, so it was a natural transition, taking him on board. And, it’s been working beautifully so far.

Me: If you were living in the world of Coronary, what do you think would be the biggest difference between your life there and your life here?

Burke: Oooh. I’d feel uglier for a start, and I’m sure my friends and family would too. Whether I’d take the bait and join the ultimate party, I don’t know… That’s a temptation I hope I’m never given the chance to take!

Burke: Because this project is going to change things. We believe that Coronary is the series that’s going to show that body positivity, authenticity and honesty aren’t dead concepts. They stay alive in the work we make.

Burke: Everyone doubts themselves; seek advice from those in the same boat. It’s through collaboration that we stop it from sinking. Reach out to me at @ryanburkewriter if you have any questions, or just want to drop by for a chat.

Joel Saavedra: I’d like to give some credit to Damian’s (the colorist’s) exceptional work on the series. He’s a close friend of mine, we’ve know each other for almost 15 years, and we grew professionally together. I’ve learned down the road that we have to be grateful in life, and he and Ryan had a big impact on my career. I have the chance to work with two amazingly talented professionals; it’s my pleasure to be on Coronary.

Me: Who are your favorite comic book artists and does their work influence your art style in Coronary at all?

Joel Saavedra: Well, I can name you a few of my favorites that I think influenced particularly my art on Coronary, all of them true masters of the profession: Alex Toth, Mike Mignola and—last but not least, my professor which I owe him everything—Marcelo Frusin. Despite their amazing work with lighting and chiaroscuro, which I love, I admire them for their storytelling. And that’s probably what I get influenced by the most during issue #1.

Me: Since Coronary takes place in London, what kind of research did you do when drawing the setting?

Saavedra: Funny that you mentioned. I didn’t know London yet. But I have been blessed to work with Ryan, and his writing is amazingly descriptive. He’s very precise and detailed, you can almost feel the scene. So this is very helpful on the process. And then, of course I use references from photos, movies and series.

Me: What was your favorite page/panel to draw in Coronary?

Saavedra: I can’t give you exactly the page—*ahem* double-page spread—I’m looking forward to drawing, because as River Song says: “Spoilers.” But I’m eager to do an awesome police interrogation scene that will open the next issue. It serves as a common thread to know more about the characters’ background stories.

Saavedra: Each character has his own beauty and interest. But if I had to choose, I think that’s Justin. On the outside, he’s a very monotonous guy. Always posing, always sharp, a stereotype of a “player.” But he’s a pretty troubled guy, and I know that further on in the story I will be able to start showing glimpses of that shell coming apart. And there’s the beauty, in the subtlety.

Me: If you were living in the world of Coronary, what do you think would be the biggest difference between your life there and your life here?

Saavedra: I’m aware that’s a fictional world, but how far are we from there? Ryan did an exceptional job capturing the mysteries of our society. That’s what struck me from the first time I read the script; I fell in love with the story because it manages to tell beautifully what most of us are not ready—or willing—to hear.

So, regarding your specific question, in Coronary’s world I might still be doing what I currently do, telling stories. Of course, only in-between my photo shoots/modelling sessions. LOL.

Saavedra: Because it’s always better to read the original medium before you see the movie! It’s a damn good—and ambitious—story and every issue gets better. I’m sure that you’ll enjoy it. We’re three professionals that love what they do and give our best to serve your entertainment.

Saavedra: That’s a tough one. This will sound like a cookie fortune message, but I mean it. Took me years to get it.

Be true to yourself. Follow your instinct. This is a career, so study. A LOT, everyday. If you can, learn from a more skilled artist. Read books, see movies, listen to music. Cultivate your mind. That’s what makes the difference. DO NOT WASTE YOUR TIME.

As my teacher says, the beauty of this profession is that it will accompany you until the end of your days. You’ll always have something new to learn, to discover, to try and to fail too.

Me: Thanks for taking the time to talk with me, Ryan and Joel! If you’re interested in seeing a society mad about plastic surgery (and don’t want to look out your window), take a look at their Kickstarter here.