A coming of age story. With zombies! Spores: Prom of the Dead is Mean Girls meets The Walking Dead. I spoke with creator/writer Dave Dwonch and artist Santiago Guillen about their plans for surviving prom night and more.

Spores: Prom of the Dead is the first volume of a planned trilogy. It collects the first three issues of the series and includes bonus material. Follow students of the fictional private school Pineview Academy in New York. As they’re getting ready to party at prom, spores spread infection and slowly begin turning everyone into zombie slaves! It’s a coming of age dramedy where the zombies may just have the last laugh!

The creator and writer of the series is Dave Dwonch, who I worked closely with at Action Lab Entertainment. He is Action Lab’s former Creative Director and President. Dave also created titles like Cyrus Perkins and the Haunted Taxi Cab and Infinite Seven. He’s joined on this project by Santiago Guillen (Instagram), a graduate of the Argentina School of Visual Arts. 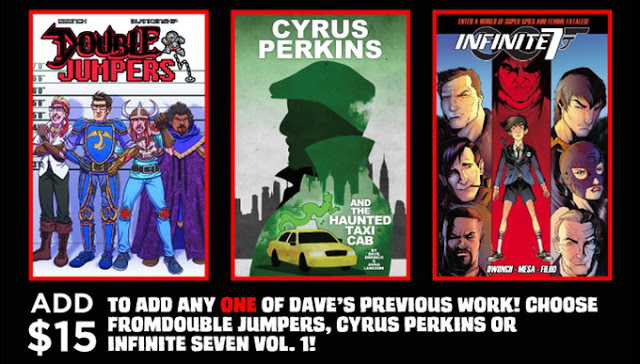 They are currently trying to raise $8,000 to successfully fund Spores: Prom of the Dead. They’ll need to reach their goal by October 5, 2017 at 3:00 PM EDT. Some rewards for the project including a digital black-and-white copy of Prom of the Dead #1 ($8), digital copies of the first three issues ($15), an exclusive Kickstarter-only physical copy limited to 100 copies ($20), nude variants—no, not that kind of nude—($25), and other special goodies like T-shirts. See even more of their rewards on their official Kickstarter page.

I spoke with creator/writer Dave Dwonch and artist Santiago Guillen about their experiences working on the book:

Me: There are a lot of zombie titles out there right now. What makes your comic book series unique?

Dwonch: Well, to start, it’s inspired by a phenomenon seen in nature. Ophiocordyceps Unilateralis is an actual insect-pathogenising fungus or “zombie fungus” that infects ants in tropical forests, infecting and essentially controlling them until they die. I found the idea fascinating and wanted to play with the idea at a larger scale. “Prom of the Dead” is the first in a planned trilogy and, without giving anything away, the story is going to spin into something very different as it progresses. “Zombies” are just the beginning.

Me: Why did you want to combine teen drama with zombies?

Dwonch: Honestly, I’m unapologetically insane for teen dramas. It’s been a love affair that started with the original 90210. The OC is one of my favorite shows; scoff if you like, but there is some really fun writing going on underneath all the overdramatics. Riverdale takes a lot of its cues from The OC. I wanted to capture some of that energy of that genre and apply it to something very familiar to comic fans… then turn both genres on their ears.

Me: What can you tell us about some of the characters in the book who will be fighting for their lives?

Dwonch: Erika and Christina are our main characters. Christina is all fire and confidence. Pretty much the only punk rock kid at Pineview, a fictional prep school in upstate New York. By contrast her best friend Erika is timid and unsure of herself. She hasn’t really come into her own yet, and is terrified to ask their friend Cooper Barnes to the prom. The three of them decide to go together when all hell breaks loose. It’s going to be a test of their friendships for sure. Coupled with the fact that they’ll have to rely on the popular kids to survive, it really becomes a unique situation. I think Prom is going to surprise the readers.

Me: How did you meet Santiago Guillen and start working with him on this project?

Dwonch: Santiago’s agent and I have had a relationship for quite some time, and Santi’s work has been on my desk for a year or two. I was just waiting for the right project to work with him on. I stay pretty busy, and I knew it was just a matter of time before we’d get the chance. He is killing it on the series!

Me: On the Kickstarter you call him “quite possibly the most interesting man in comics.” Why is that?

Dwonch: Santi traveled Europe as a caricature artist! That alone gets him pimp points in my book! 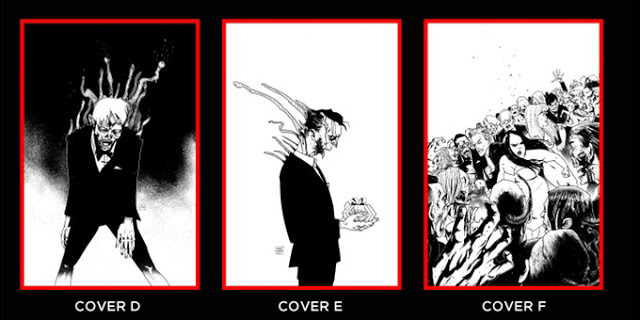 Me: What is some of the bonus material backers will get in the graphic novel?

Dwonch: We’re doing something a little different with Prom of the Dead. The bonus material in the Kickstarter is the #1 issue. The goal of the Kickstarter is the graphic novel, and while we’re offering it, we’re printing a black and white “first issue” ONLY for the project backers. Readers will be able to get the full color OGN after the Kickstarter funds, but that first issue is going to be super rare. I wanted to make sure that my fans and collectors alike would get what they want. All told there will be less than 700 copies of Prom of the Dead #1. I don’t intend to reprint that book. I think that’s pretty unique.

Me: Why did you pick Kickstarter to fund this project and set a goal of $8,000?

Dwonch: I know it’s a lot to ask for, but the money is broken out across Santi’s page rate, a colorist, letterer, printing and Kickstarter fees. We’re running it lean and mean, and anything above our ask will go towards the sequel.

Me: So if you had to live through Prom of the Dead, what would be your survival plan?

Dwonch: It involves a second story, solar powered apartment with the stairs taken out, a rope ladder kept in the apartment, and a LOT of canned goods. I once told Max Brooks (World War Z) my plan and he agreed that I’d be safe… for a while. You have to understand, in a zombie apocalypse it’s the humans you have to worry about. That’s why I’m not telling you EVERYTHING about my survival plan!

Dwonch: Surprise. I’m going to surprise the readers with Prom. I just need the opportunity to do it.

Dwonch: People always get hung up on success: whether they are going to have fans, fortune, fame… whatever. But really, the first level of success is accomplishing the work itself. That’s actually the only thing you should concern yourself with. All the other stuff comes from hard work, so do work. It’s the only thing that matters!

Me: In Prom of the Dead, what was your favorite scene to draw and why?

Santiago Guillen: Since my agent and Dave contacted me to offer me this project, I really found it very funny and I caught it right away. The fair mix of The Breakfast Club and zombies, but current, are enough reasons to want to work on it. I think the relationships between the characters and how they interact with each other is my favorite part to draw. It is easy to identify with them.

Me: Who is your favorite character to draw and why?

Guillen: Little by little, I take care of each one of them, because they offer very different and attractive personalities. But certainly Erika Paliski (the main character), is one of my favorites, and Cooper Barnes follows him. They are not cliché and very nice.

Me: As a graduate of the Argentine School of Visual Arts, what would you say is the most important lesson you learned while you were at school?

Guillen: I think that walking through an art school will give you a picture of the world of visual arts. Take advantage of every knowledge acquired as a tool. And choosing where you want to go is what matters. After all, one thing is clear: that you must work very hard to get it. 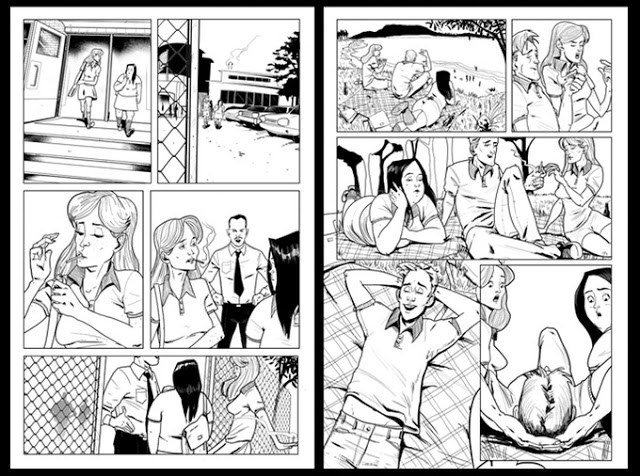 Me: The Kickstarter also mentioned that he traveled to Europe as a street caricaturist in 2015. Can you tell us some of your experiences and how you grew up as an artist during this time?

Guillen: In the early years of art school, I met my girlfriend. She was a street caricaturist, something completely different from the comic and any studio work. The first years were difficult, because there you really have the pressure to give people a reflection of themselves, a memory, and you have to like what you see. Without saying that, 50 people will be behind you watching each line carefully; you cannot flinch. Only at the beginning was it difficult. Now I enjoy it very much, although I enjoy drawing studio cartoons more.

People value street art a lot because art is often of little access, and here you can see it when you walk with your family. Traveling through Europe was a wonderful experience. Living away from home, art was truly full of adrenaline and motivating.

When you talk about growth in travel, it really is literal. You can learn a lot of things away from home, for example you value much of what you have and do not protest so much for what you have not yet achieved.

Me: So if you had to live through Prom of the Dead, what would be your survival plan?

Guillen: The best option to survive, I think, is to work as a team. When everyone begins to die, your friends and acquaintances will be your family and defend you tooth and nail if someone messes with one of them. For this to work there must be few members in the group, where everyone knows the place where they stand. 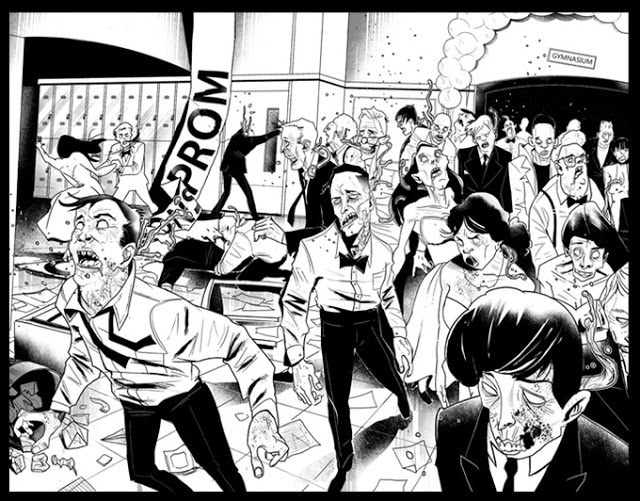 Me: What is the number one reason people should commit to money for their project?

Guillen: What Dave and I offer is a piece of pure entertainment and collection for the fans. I am sure that the fans can enjoy this project as much as I do when doing it because it has all the condiments that a genre story can have and great writing by Dave. This project is done with a lot of passion on both sides.

Me: What inspiring words do you have for aspiring comic artists?

Guillen: First of all I must say that I do not feel very far from the position of someone who aspires because every day is a day of construction and growth.

I think that someone who wants to draw comics, must eliminate from their thinking, “I cannot, it is impossible.” You just have to start working and studying and keep working. It is the only way. If it’s really what you want, get moving.

Finally, the process is what matters, not what we long to get from it. 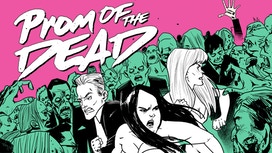 Me: Thanks for sharing your work with me, Dave and Santiago. If you’re reading this and interested in enjoy prom with some zombies, check out Prom of the Dead’s official Kickstarter here.