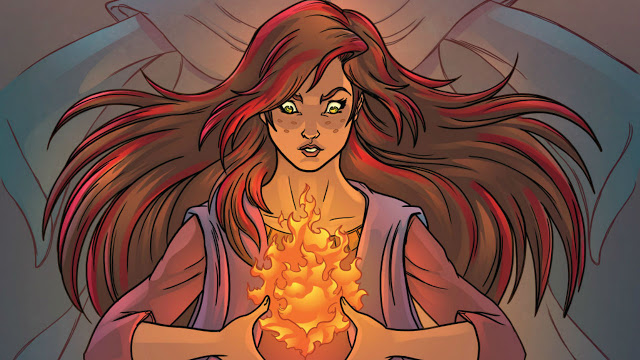 Last Ember Press Sets Kickstarter Aflame With The Last Ember #1
From a single Ember, an endless fire can grow!
Last Ember Press (LEP) was founded in 2015 and up until now has self-funded all of our titles, and continue to do so today. The Last Ember is LEP’s flagship title, and as such we wanted to put our best efforts toward bringing it to life.  Written and lettered by Brant Fowler (Singularity: Rise of the Posthumans, Celestial Falcon) pencils by Giulia Lalli (Puck) with inks and colors by Lisa Moore (Garfield, Faerie Stories) THE LAST EMBER #1 will ignite the Emberverse!
Set in Ocean City, Maryland The Last Ember tells the story of Ember Madison, an ordinary teenage girl with ordinary teenage problems. Until one fateful day, her entire world changes, and something deep down inside of her – something she never knew existed – comes to the surface. That is the day that the fire started.
The Kickstarter campaign started on October 20, 2017 and will end on November 17, 2017. It has some great affordable tiers with a host of rewards, including:

Join Ember on her journey as she tries to understand what is happening to her and why. She doesn’t know it yet, but it has all happened before, and she is the last in a long line to possess these abilities. Her life is about to get much more complicated.
About Last Ember Press
Last Ember Press is an independent comic publisher founded by Brant Fowler, Lisa Moore and John Wilson in February 2015. Our goal is to tell stories in new ways from the perspective of seasoned indie comic creators. Combined, the three of us have over 30 years of experience in the comic industry from every side and angle. We strive to present stories that are both familiar and innovative at the same time. We hope that you’ll join us on this crazy and exciting journey into the world of comics!
About Brant Fowler
Brant Fowler is the writer/creator of THE LAST EMBER, the flagship title of Last Ember Press (LEP) where he serves as Co-Publisher. In 2015, he co-founded LEP to work on his own creations after working in the industry for over 15 years in various roles. Most notably, he lettered comics for companies such as Image Comics, Action Lab Entertainment and Moonstone Books. He has written and co-written other comics like WANNABEZ and CELESTIAL FALCON, and short prose stories for Pro Se Productions’ SINGULARITY: RISE OF THE POSTHUMANS. Brant is a fan of fantasy, superheroes, TV & film, and might be addicted to wrestling. In some parts he is also known as the Gonzogoose, why we may never know. An Air Force brat, Brant traveled across the south US before settling in Kentucky for most of his life. He now lives in Texas with his girlfriend and two dogs.
About Giulia Lalli
After graduating at the age of 21 from International Comics Academy in Reggio Emilia ( Italy ), Giulia Lalli published 4 comic books for kids with Medikidz co. (2014-2016) Now she is working on her personal project PUCK with an Italian editor, Cronaca di Topolinia (2017). Giulia is also currently collaborating with Last Ember Press for publishing THE LAST EMBER series.
About Lisa Moore
Lisa is a professional colorist, mainly doing work for BOOM! Studios’ all-ages imprint KaBOOM!. She has provided colors for titles such as Garfield, Bravest Warriors, Regular Show, and more. Lisa has begun to branch out into Writing and Inking for Last Ember Press.  THE WYLDE a web-comic she is writing, inking and coloring will debut on Patreon and LastEmberPress.com very soon
To find a comic shop near you, visit Comic Shop Locator or call 1-888-comicbook.
For comics anytime, anywhere check out Last Ember Press and LEP Store
Follow & Like On Patreon, Twitter, Facebook, Google +, YouTube, Instagram, & DeviantArt

Let us know in the comments what you think of this Last Ember Press Announcement and don’t forget to follow us on Twitter for the latest Previews, Reviews, News and Interviews!
All images images are courtesy of Last Ember Press