This week we’re talking with Zombie Tramp and DollFace creator Dan Mendoza about his amazingly successful Kickstarter campaign for his newest series, Sad Girl Psycho Baby. This comic book stars Sad Girl, whose abilities include making the people around her become suicidal.

The post-apocalyptic world of Sad Girl Psycho Baby is filled with gangs, low riders, and Spanglish. Sad Girl was born out of a sadness so large it makes everyone around her kill themselves, with the exception of her little brother and grandmother, who were taken away from her years ago. Now she’s bent on revenge and after the mysterious women responsible: Relik.
This is the first project from Dan Mendoza’s own imprint, Still Ill Princess. According to the Kickstarter, his new imprint will be all about “grindhouse storytelling full of high octane action, beautiful women, and over the top violence representative of the horror and exploitation genres Dan loves.”

The Kickstarter ended up reaching its $8,000 funding goal in one hour and is currently still going strong at over $40,000. It will be over on November 27, 2017 at 11:59 PM EST. Rewards includes a physical copy of the book signed by Dan with several different covers available ($20), a limited edition Bill McKay (Zombie Tramp) cover or risqué cover signed and numbed by Dan ($25), plus T-shirts ($30) and even more. If you’re interested, you can back the project here.

Enjoy my conversation with Dan Mendoza about his plans for Sad Girl, his new imprint and his success on Kickstarter:

Me: You describe Sad Girl’s powers on your Kickstarter, but what is her personality like and what will make an audience want to root for her?

Mendoza: Sad Girl is a very stubborn character. Very likable in her toughness but a soft side that she keeps guarded. She is the essence of sadness. And with that being said, even she gets to herself from time to time. I think a lot of people will be able to relate to her in that sense and root for her when she says or does things that we all wish we could do in the world but stay bottled up inside instead.

Me: Who is Sad Girl’s companion Sugar Pop and what can you tell us about the antagonists they will be facing?

Mendoza: Sugar pop is as bubbly as her name. It takes a lot to piss her off. A positive character to contrast the negativity of Sad Girl. Sugar Pop believes in love.

The Antagonist in the book is a girl named Relik, who will remain a secret for now. 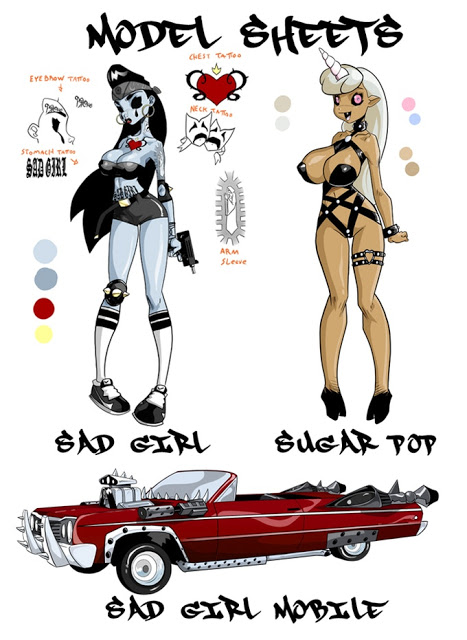 Me: What is the post-apocalyptic world of Sad Girl Psycho Baby like and how does it differ from others?

Mendoza: It’s a world set in perpetual sunset. The atmosphere has changed the people and formed new races. Almost every city Sad Girl comes across will be different than the previous. Different races, different genres. One city could look like a barbarian world and another could be high tech and futuristic.

Me: How many issues will the Kickstarter cover of Sad Girl Psycho Baby and how long are you planning on making the overall series?

Mendoza: With the amount of money the KS is making, I should be able to fund the first story arc, which would be 3 to 4 issues. I plan to have each issue run about 32 pages, which is considered double-sized. The average comic is about 22 pages. I plan for the series to be ongoing. 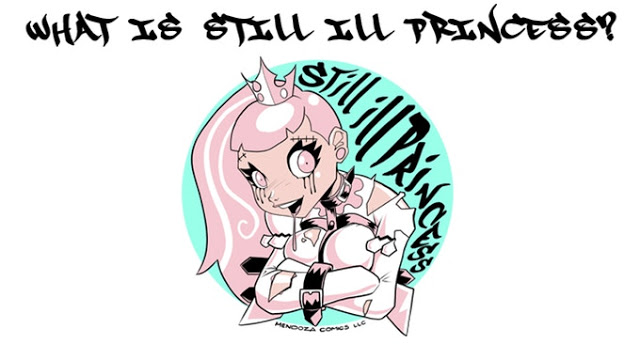 Me: This is the premier title of your Still Ill Princess imprint. Why did you decide to create this and what are your future plans for it?

Mendoza: I wanted to make a brand that’s my own. I miss doing things without deadlines and third party perspectives. I just want a label that represents me, with products that I don’t share with anyone but my fans.

Me: You mention that your imprint will be “representative of the horror and exploitation genres” you love. What is it about these genres that you love so much? And if you had to pick your top three favorite things to watch/read in these genres, what would they be and why are they your favorites?

Mendoza: The reason I love the genres so much is that they are unapologetic. They are the genres that are nontraditional in story. Often they are a “root for the bad guy” or “anti-hero” story. They make you cringe. They make you laugh. They are free to go that extra mile of shock and unsuspected visuals.

I’m more of a movie guy than a book guy. It’s hard to put my favorites into only 3, but my top 3 movies that speak to me would have to be:

Me: Your project ended up being successfully funded after only an hour and currently has raised over $38,000. To what do you attribute such an amazing response to your Kickstarter?

Mendoza: I give it all up to the fans. They are super loyal to me as I am to them. The success of everything is always because of fans, and if you don’t treat them well, they will just come and go. I think that me and the fans have a great relationship.

Me: If Sad Girl had an all-out brawl with Zombie Tramp, who would win and why?

Mendoza: lol tough question. I know Zombie Tramp way better than I’m getting to know Sad Girl. Every Character I develop is a slow process. I get to know them better as the stories progress. I think Sad Girl will have some surprises up her sleeve that would put her in the ranks of being on par with our beloved “street walking dead”.

Me: What is the number one reason you think people should back Sad Girl Psycho Baby?

Mendoza: Simple. If you’re getting tired of the same old drab P.C. stuff coming out of the comic industry and just want to have fun again reading comics. This will be a great adventure for you. It’s fun, it’s hardcore, and it takes readers into another world full of action and chaos.

Me: What inspirational words do you have for aspiring comic book writers and artists?

Mendoza: Work hard. There’s always someone out there working harder than you with the same dreams as you. If you don’t continue to push yourself to make yourself known, that other person will. Stop criticizing what everyone else is doing with their careers and focus on your own. Focus is the key to success.

Me: Thanks for taking the time to talk with me Dan and congrats on your success! If you’re reading this and are interested in the project, you can check out Dan’s official Kickstarter project here.