Find out what happens when 90% of the people in the world stopped moving? Writer Justin Gray (The Monolith, Jonah Hex) explore this concept in the world of his survival horror comic book series that we’re featuring this week: Standstill.

This apocalyptic tale explores the real dangers that can come about when 90% of the world’s population are alive but paralyzed and unable to escape.

The purpose of this Kickstarter is to help Gray and Broxton build an audience in an attempt to find the right publisher to get their projects into retail stores. They are trying to reach $5,500 by December 7, 2017 at 9:52 AM EST to pay artists, cover production and printing. Rewards include digital ($3) and physical copies of Standstill #2 ($5) plus some other works by Justin Gray such as Filth, Human Overlords ($15) and DELETE #1 ($18). Get prints ($25) and even a Standstill trifold pinup and safety brochure is available ($20). Pledge money to the official Kickstarter here.

I spoke with creator and writer Gray and Broxton about Standstill and some of the other works included in this project as rewards:

Me: For people who haven’t read the first issue of Standstill, what do they need to know in order to be fully prepared for #2?

Gray: The good thing about this campaign is there is a relatively inexpensive way for new readers to get caught up. Issue #1 is available at many levels, including a bundle of both books in print for just $10.00 plus shipping or just $6.00 for digital. The premise is that 90% of the world has fallen victim to an unexplained paralysis. The book follows the survivors of this pandemic.

Me: You mention the numerous amount of apocalyptic fiction already out there, but that Standstill shows the crazy things and real dangers that could take place. Can you tell us a bit more about this?

Gray: Absolutely. With so few people to keep our infrastructure going you’ll see a dangerous breakdown in the barrier between humanity and nature. Natural disasters will go unchecked as they did thousands of years ago. We have so many active chemical, fuel and nuclear facilities that present a very real environmental hazard. I think the closest I’ve seen in comparison was Cormack McCarthy’s The Road. At the end of the day this book is about pushing the limits of these characters and the environment and backdrop are perfect for doing just that.

Me: Who are some of the survivors the story will follow in Standstill?

Gray: The story opens with a sharp focus on a couple in love who are split apart by this Standstill event. I wanted to explore the idea of what it would take for a trained EMT to keep the person he loved alive as the world fell apart around them. In issue 2 the stage widens to introduce other survivors including Dottie, a rockabilly lounge singer in Phoenix and a convict on parole in Colorado. We have this emotional humanity playing out between Mason and Luna, but I wanted to explore how someone with a much darker history would view suddenly being alone among so many living statues.

Me: How did you discover Jimmy Broxton and decide he was the right artist for this project?

Gray: We’ve actually known each other for years. Brox and I collaborated on a story for the Sex and Violence anthology that Jimmy Palmiotti and Kickstarted back in 2012. Later in 2013-14 we worked together on the six-issue adaptation of Hugh Howey’s best-selling science-fiction omnibus WOOL. 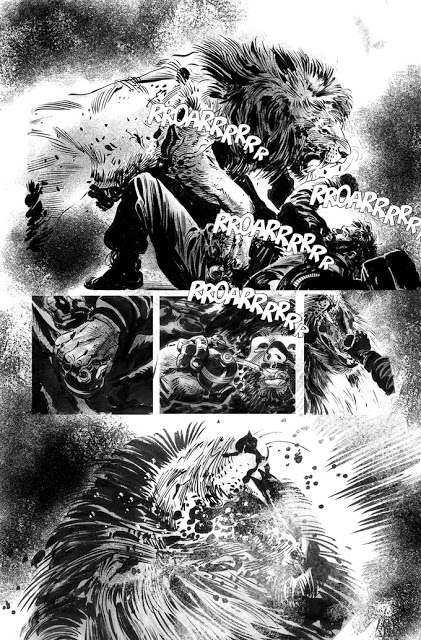 Me: Living between a famous prison and a nuclear power plant inspired your safety brochure reward. Did it influence anything else in the story?

Gray: It was the launching point for the story after the initial idea of everyone being trapped in his or her body. Both the prison and the power plant have been a part of my daily life for over 12 years so I’ve always had this sense of danger, not to mention monthly emergency tests and sirens. Standstill was very organic in that way.

Me: What is the number one reason you think people should pledge your project on Kickstarter?

Gray: I think we have a quality book with outstanding artwork. We both have been working on this as a passion project for some time. The long-term goal is to move away from Kickstarter and into proper publishing, but the immediate reality is Broxton needs to get paid for his countless hours of work illustrating these gorgeous pages.

Me: One of the rewards include an exclusive first look at a Digital Ashcan of Billy The Kit. What can you tell us about this story and your future plans for it?

Gray: The first point to this is that International shipping is a nightmare for small print runs, an inflexible envelope automatically adds $23.00 to your per issue cost. I can see rolling the cost of shipping into a hardcover or graphic novel sized product, but on a single issue that’s just insane. As a result, I wanted to offer a digital exclusive reward that might help entice international backers. In its simplest form, Billy The Kit is the bastard love child of Bugs Bunny and Jonah Hex. It is a comic I’m dying to write because I want to work on something that goes back to a similar format that we used for Jonah Hex – short stories that can be assembled in any order.

So, I reached out to artist Barry McClain Jr. because he has a very bombastic and stylized approach to sequential art. On the surface, it almost looks like a kid’s comic but it is DEFINITELY not. This is a foul-mouthed, hyper violent and mature, talking animal supernatural western. These two comics are dream projects so I’m doing everything I can to see that they get out there.

Me: You’ve worked on a wide variety of comic book projects for various publishers, from DC’s Knight and Squire to Dynamite Entertainment’s Vampirella to Hugh Howey’s sci-fi omnibus WOOL. Can you talk about how those projects have differed from Standstill and how your art process has changed over the years?

Broxton: Standstill is creator-owned, so my mindset is different. I feel more freedom in some ways, but also more responsibility, as we are crafting something new that doesn’t have a pedigree or an existing fan base. So exciting and daunting, which is a good place to be I think. I also don’t want to let Justin down. I’m helping him hold his baby, and I don’t want to be the one that drops it on its head!

Me: Having worked with Justin on a couple of projects before this, when did you two initial meet and how long afterwards did you start working on Standstill together?

Broxton: Justin and Jimmy (Palmiotti) approached me to work on their first Sex and Violence Kickstarter around 3 years ago. Originally I was to be drawing Jimmy’s story, but Justin’s became available first, so we switched. I immediately synced with his approach to graphic storytelling. Everything seemed right, he knows how comics tick. Surprisingly, not all writers do. He has a keen visual sense, also he’s not authoritarian, he gives me room and lets me design and lay out the pages as I want. 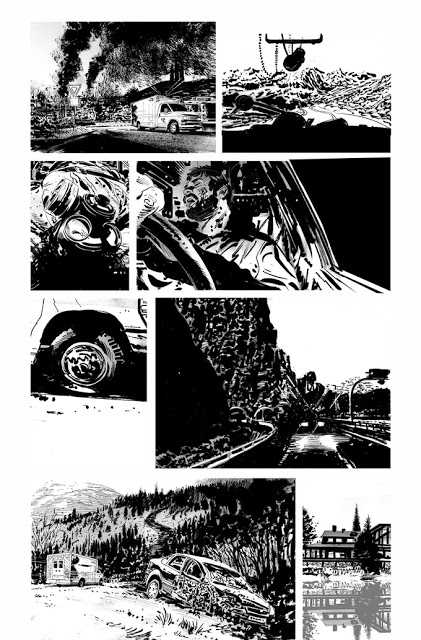 Me: What has been your favorite page to work on in Standstill so far and why?

Broxton: That’s a tough one, as all the pages have things about them I enjoyed creating. But, there’s a page in issue 2, where we see a jetliner fall out of the sky and destroy a shopping mall. There’s a silent, quiet before the storm panel, a view from inside one of the stores; it does that rare thing, it came out exactly as I’d hoped, hardly ever happens, but that’s why we soldier on, to improve. So it’s a good thing I consistently fall short of my own expectations. Hopefully the readers aren’t similarly disappointed.

Me: Can you talk about some of the artists who have inspired or influenced your work and how you feel they’ve effected your art style on Standstill in particular?

Broxton: So many, but the real influences are Toth, Caniff, Corben, Chaykin, Steranko and Sickles. On Standstill I’d say Noel Sickels and Alex Toth are my primary influences. I’m obsessed with design and balancing the blacks on the page, using negative space as part of the storytelling, and they were both masters of that. WOOL, which you already mentioned, was my love letter to Steranko. Possibly unrequited love, but Jimmy did tell me Steranko had some nice things to say about my “Pornland” (Sex and Violence) story with Justin, so, I live in hope. 🙂 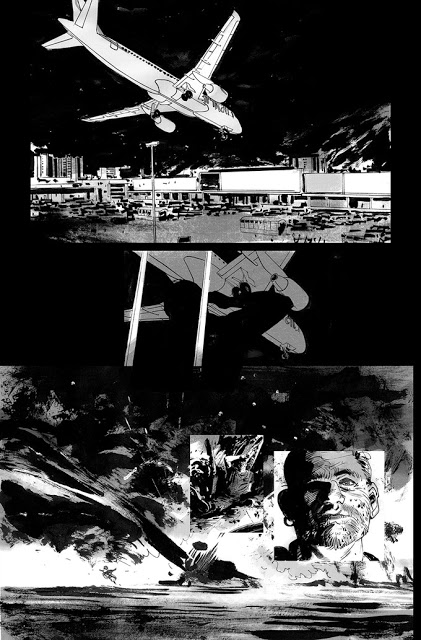 Me: What is the number one reason you think people should pledge your project on Kickstarter?

Broxton: If enough folks are generous enough to back this project, then it gets made, and making comics is what we love to do. We can’t do it without the support of our wonderful backers, bless em’ all!

Broxton: Don’t give up the day job, and draw all the time. And I mean real drawing, observing from life, not just swiping Jim Lee and John Romita Jr. 🙂

Me: Thanks for letting me know all about Standstill and your other unique project! If you’re reading this and are curious about this paralyzing world, check out the Kickstarter here.