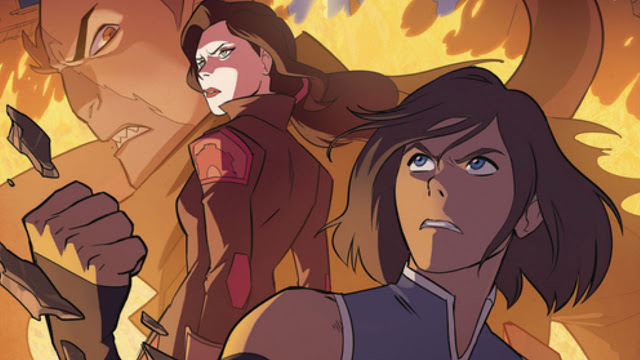 Dark Horse has a three-volume original graphic novel (OGN) series that follows the adventures of Korra, Asami and the rest of the cast from Nickelodeon‘s beloved series The Legend of Korra. The series of OGNs titled THE LEGEND OF KORRA: TURF WARS is written by co-creator Michael Dante DiMartino with fellow co-creator Bryan Konietzko taking on consulting duties. The art from the series is brought to life by Irene Koh and Vivian NG. 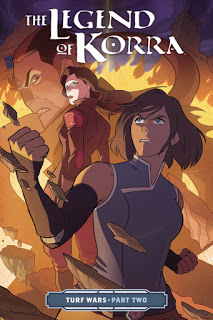 I am new to the world of Avatar and Korra, having only just finishing the two series recently, and I am glad I did. I really enjoy the world the animated series built, and unlike fans of the shows as they aired, I have an advantage of knowing the world continues on in comics and OGNs as I finished the series. So I was able to dive right in and continue the story thanks to the first OGN.


The Legend of Korra: Turf Wars Part One (Comic Uno’s Review) which came out last year continued where the animated series left off with Korra and Asami taking a vacation in the Spirit World and left us off with the transformed Tokuga taking control of Keum Enterprises. The second book continues to tell the tense story of the division between the spirit and the human world, while further exploring the Korrasami romance which was hinted at in the series and cemented in part one.

This book starts off with Korra, Tenzin, Meelo, Ikki, Jinora and other members of the Air Nation arriving in the Spirit World through the Republic City portal only to find it is desolate the once beautiful paradise full of light and flowers is now bleak and lifeless. They leave the Spirit World to find  General Iroh and the United Forces there setting up a barrier around the Spirit World portal despite Korra and Tenzin’s protest as it is an order from President Raiko in light of the spirit’s attacking Tokuga in the last book.

The book continues on where we see Korra trying to protect the portal but finding that President Raiko who is trying to be re-elected despite low polls numbers is slowly turning the people against her. Raiko is running using the promise of building new homes for those who were left homeless from the conclusion of the series, taking credit for Asami’s idea.

Meanwhile Asami finds herself in need of protection as she is visited by Jargala Omo, leader of the Creeping Crystals a gang leader who offers “protection” for a low monthly fee. Asami rejects the offer but is later kidnapped which sends Korra after Jargala.

Mako and Bolin report to Chief Lin Beifong about what happened at the portal and let it slip that Korra and Asami are now in a relationship. They also mention Korra’s belief that Wonyong Keum is behind Tokuga’s attack, but she calls them off of it citing that he is a very powerful man. Mako and Bolin work the case and join up with Korra with the Jargala angle when they realize maybe it isn’t her or Keum, that it may be Tokuga. The book ends with a confrontation between Korra and Tokuga with Asami’s fate hanging in the balance.

The Legend of Korra: Turf Wars OGNs are incredible. These books continue to dive into the world that the show created and through the writing and art does it in a way that not many of similar books have been able to do. The books maintain the same feel and themes of the show, delving into the political and sociological undertones but manages not to make it preachy. They also manage to maintain this as a character driven story making you feel and care for these characters and their struggles.

The art here is phenomenal. I feel so immersed into the world of Korra through this book and a large part of that is because of the art. Irene Koh and Vivian Ng blow me away with the turn of every page. Each and every page is a treat to the eyes, and it helps to bring these characters to life for me. While reading a book with an animated counterpart you often hear the voices but bad art could pull you out of that, but Koh and Ng makes it feel like I am actually

But this is not perfect. I think these books are kind of short, and take a large break between them. These books equal to about 3 1/2 – 4 standard issues, and come out about 6 months apart. Now this isn’t a big downside, but as a fan it kills you to wait that long for more with each book leaving you off on a cliffhanger. I would love to have this as a monthly title with this quality but if I have to wait for this level then I am more than happy to do so. A positive about this format though is the price, at only $10.99 you are saving a little on it then you would if this was a monthly title.

Overall I really enjoyed this book and highly recommend it not just for Korra fans, but for everyone. I give this book a solid 4 1/2 Stars out of 5 for The Legend of Korra: Turf Wars Part 2. Check out the full solicitation below.

SOLICITATION:
Recovering from a fight with the dragon-eel spirit and furious for revenge, Triple Threats member Tokuga solidifies his ties with the duplicitous Wonyong. Meanwhile, when Republic City’s housing crisis reaches its peak, Zhu Li sets her sights on the biggest public figure in the city-President Raiko—in a bid for the presidency! With her friend’s success, the future of the spirit portal, and the wellbeing of Republic City’s citizens at stake, can Korra remain neutral and fulfill her duties as the Avatar? Written by series co-creator Michael Dante DiMartino and drawn by Irene Koh (TMNT, Afrina and the Glass Coffin), with consultation by Bryan Konietzko, this is the official continuation of The Legend of Korra!