Get ready for an action-packed heist where nothing could go wrong… right? I chatted up the creative team for Blood on the Tracks about their Valentine’s Day Kickstarter.

Blood on the Tracks is described as Akira Kurosawa’s Rashomon meets Brubaker/Phillips’ Criminal meets The Great Train Robbery. Set in the Midwest, a group of five criminals try and get their “big score”. Each of the five chapters in this 136 page graphic novel is narrated by a different character with a new perspective. Get ready for train robberies, carjackings, armored car heists, bar fights, motorcycle races, battlefield combat, and car chases!

The graphic novel is written, lettered and designed by Carlos Gabriel Ruiz; illustrated by Brian Atkins; and colored by Brandon Daniels. The cover was designed by Bryan Ward and the editors are Jason Green & Steve Higgins. They are trying to raise $7,000 by March 18, 2018 on 11:59 PM EDT. Rewards include digital downloads for the first chapter ($5), the entire graphic novel ($15) plus a softcover ($25) or hardcover ($35) option. You can even get drawn into the book as a villain or police officer ($100)! If you want to look for your own reward, check out their Kickstarter here.

I interviewed Carlos, Brian and Brandon about the project and the characters’ big score:

Me: You mention how each chapter is narrated from a different character’s perspective. Who are these five characters and how would you describe each of them?

Carlos Gabriel Ruiz: Billy. He is the ringleader of the group who assembled the crew, plucking each member from the scrapheap and giving them a purpose. He’s ex-Special Forces and doesn’t suffer fools. He’s a libertarian, hates big business and big government, and would be involved in a local militia if he didn’t think that they were such a joke.

Javier. He is the brains behind the operation. He has the technical know-how to get the jobs done and is the man who always puts together the business plans and backup plans for the heists. He’s been hooked up with Billy ever since their Army days and likens his role as Scottie Pippen to Billy’s Michael Jordan.

Nina. The honeypot, the decoy, the black widow, and the girl who is always overlooked for her street smarts because of her sex appeal. She’s been a criminal since her teenage years but is growing tired of a life of crime.

Andre. The facilitator and muscle. Andre is Billy’s right-hand man when the action goes down and is never far from his side. Billy saved Andre’s life during a snatch and grab operation that went sideways in the desert. They’ve been partners in crime ever since because Andre feels he owes a debt to Billy

Marcus. The getaway driver. The youngest crew member, Marcus is a smooth talking pretty boy who can talk his way through anything and anyone. He’s always working on a con and usually doesn’t think things through, just acts on impulse. His driving skills are second to none. 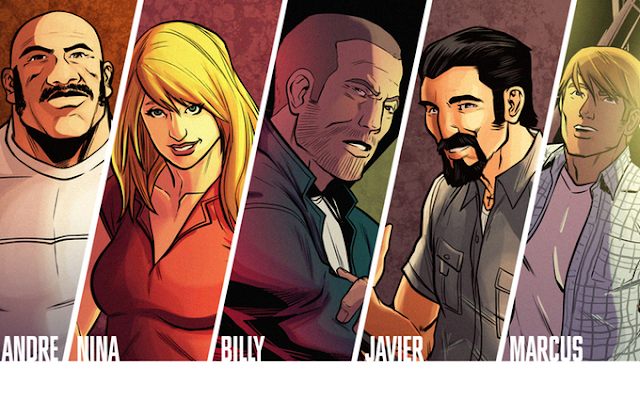 Ruiz: I feel like there is a little bit of all of them in me. Honestly, I love all my characters equally and would never choose one over another, but if I had to choose one… I’d probably say Billy because I put together the crew for this book and I love it when a plan comes together.

Me: You have a reward tier for “The Bleeding Cool Villain Track”. Can you tell us a bit more about this level and Bleeding Cool?

Ruiz: How many people have wanted to see themselves drawn into a comic book? Well here is your chance with both our Bleeding Cool Villain Track and our Beat Cop Track. You can either have yourself drawn as a Gangbanger with our Bleeding Cool Villain Track or as a Police Officer with our Beat Cop Track. Both of these rewards are named after two of our favorite comic book websites, The Beat and Bleeding Cool. Unfortunately, we didn’t have a library scene in our book that we could name in honor of Comic Book Resources (CBR). We’ll get them with the next Kickstarter campaign…

Ruiz: The number one reason people should pledge to our Kickstarter is because of the story.

If you are looking for a really cool heist story with amazing art and high production values by some up-and-coming talent, then look no further than Blood on the Tracks. Brian, Brandon and I have been making comics for a while now, and we all think that Blood on the Tracks is our best work yet. You will too.

Ruiz: Just do it. Those are my inspirational words. If you have a story you want to tell, then write the damn thing and get someone to draw it. Period. You have to put in the sweat equity to get the book off the ground. No one wants to hear you talk about your cool idea for a comic book that you’ve been sitting on for years and years without doing anything with. No one cares about the dozens and dozens of pages of character descriptions and world building that you’ve done in your notebooks, yet still haven’t bothered to script one page of the story. If you believe in your work enough, then write it, hire an artist, and make the book a reality. Like DMX said, “Talk is cheap, motherf*cker… Gggrrrrrrr.”

Me: How did you become part of the Blood on the Tracks project?

Brian Atkins: Carlos reached out to me and pitched this heist story for me to draw. When picking what projects to draw I look for something I haven’t done before. While Blood on the Tracks on the surface may seem the typical robbery crew story, there is a lot going on under the surface.

Atkins: I think I identify with Marcus the most. He is capable and serious when he has to be but otherwise he’s along for the ride and enjoying every bit of it.

Me: You’ll be doing commissions for some of the reward tiers for Blood on the Tracks. Can you tell us a bit about your past commissions and some of the most interesting ones you’ve had to do?

Atkins: The most interesting commission I’ve ever been asked to draw was a two headed man. Nothing terribly crazy about that until the commissioner specified that one head was to be Don Knotz and the other Bill Cosby.  The craziest thing about this was the guy had a whole collection of this same thing by a dozen or so other artists.

Atkins: Comic work is hard. This will always be true so the best thing you can do is draw what you like, how you like. People and other creators recognize authenticity.

Me: How did you become part of the Blood on the Tracks project?

Brandon Daniels: I’ve worked with Carlos and Brian on a few projects over the last few years. We are all members of Ink and Drink Comics and first met there.

Me: What was your favorite page to color and why?

Daniels: There’s a two page spread in the beginning of issue two that is part of a flashback to when the characters were in the army. That spread was fun because it’s a bit of a 180 in location and tone compared to the rest of the book. Each issue contains a flashback, which allows me to change up the color palette and try interesting things.

Daniels: Javier. He’s kind of the brains of the operation.

Daniels: People should pledge money to our Kickstarter if they are a fan of comic books or action movies or heist movies. Blood on the Tracks brings a new take to those popular genres in comic book form.

Me: What inspirational words do you have for aspiring comic book colorists?

Daniels: Coloring is, in my opinion, the most rewarding part of the process. It’s when you really see a page come to life. And it’s a great way to get to collaborate with writers and artists that you admire.

Me: Thanks for taking the time to tell us all about Blood on the Tracks. If you’ve made it this far and are interested in checking out their Kickstarter, you can see it here.