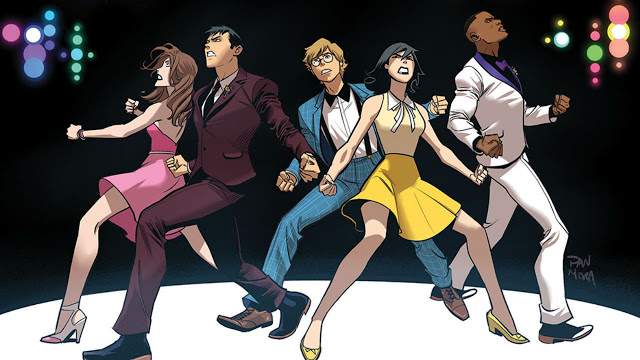 Previously in Power Rangers: The Rangers have each been facing their own struggles balancing being a Ranger and being themselves. Zack has a secret admirer and is ready to ask them to the dance. Kimberly‘s boyfriend Matt hasn’t been the same since he was hurt in an attack from Rita, because she replaced him with a Putty, and the Rangers are starting to notice something is different. Billy has been insecure with his role on the team and is ready to allow Matt to take his spot. Trini is crushing on Jason, but hasn’t told him. Matt told Jason what everyone but him knows, that Trini likes him and Jason is afraid to date a Ranger because of how it may affect the team. They are about to go to Homecoming can they have a good time or will Rita crash the dance? Find out next in this review of GO, GO POWER RANGERS #7! 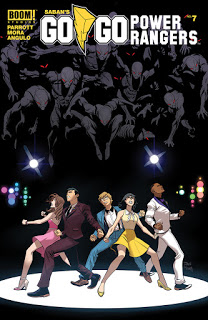 The issue starts off with a flash back to over ten thousand years ago with Rita, Finster, Squatt, and a monster named Rammerhead as they attack the planet of the Pongies, which we find out here is where Baboo is from. We find out that Baboo is a potion maker and his king asked him to make them a potion to make him and his soldiers indestructible against Rita‘s army. Instead of killing him like he begged Rita decided to use his talents. This was an interesting origin for Baboo. I love these new origins for these characters, well not new but origins period, as the show never explored any of the villains really. But I would have loved it if Parrott would have used his Japanese name Totpat or his full name Tottopatto as the name of his home planet, as a nice nod for Sentai fans. 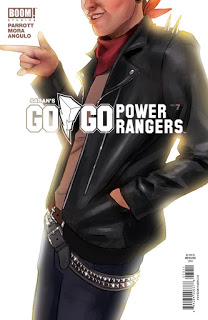 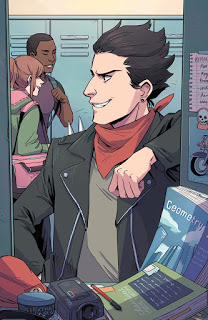 We return to present day where the Rangers are all talking with Billy who doesn’t want to be the Blue Ranger, and offered up Matt, Kimberly‘s boyfriend as a better candidate for the role. The Rangers all assure Billy that he was deserves to be the Blue Ranger and that they each have doubts. I loved the scene where Jason tells Billy Zordon chose him and not just because he was with them. This goes to show why Jason is the best leader in Power Rangers. He cares about everyone of his team members. He could have agreed and took a stronger fighter, Matt to join the team, but he didn’t. 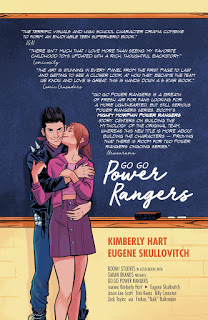 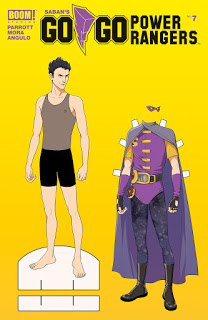 The Rangers all prepare for Homecoming in different ways. Jason spars with Matt, and tells him he isn’t going to the dance. Zack approaches Violet about being his secret admirer and asks her to go to the dance with him. Kimberly and Trini are at the beauty salon getting their hair and all done and talking about the dance. Trini is going with Billy, who she asked to take her in exchange for watching a Cosmos Marathon the following weekend because Jason has been acting weird lately. Kimberly admits that Matt has been acting weird too, even avoiding a kiss but she refuses to allow “odd boyness” ruin her having fun at the dance. Zack, Billy, and Matt all go tux shopping and Zack tests Matt with a fake memory from their childhood, and Matt failed it sending a red flag to Zack who alerts Billy. These were cool scenes. This is a book about the teens first, but it never forgets the fact that they are Rangers. We see them going through typical Homecoming prep time, hair, clothes, dates, drama, but Parrott uses these scenes to also remind us of the main Matt plot. Each scene we get a piece of this plot but it never felt forced. 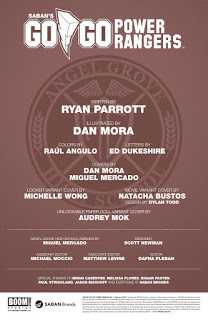 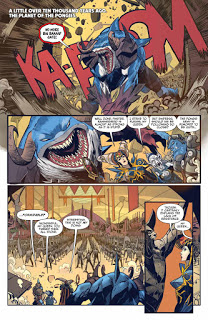 Back on the moon, Matt has finally freed himself and when Squatt comes to feed him he takes him by surprise using a fork to get him to release him. A small scene, but it is the type that snaps you back to the focal plot with Matt and how much danger his life really is in right now.

The kids all head to Homecoming and do the typical things like dance, take pics, having fun. Jason is preparing to go to the dance stag to be there with his friends. Bulk and Skull are having a great time too with their dates who may be starting to like them? Then Marleau Eskin threatens to have her minions dump paint on Bulk‘s date unless he withdraws from the Homecoming Court, which in an act of selflessness he does. This was a great way to paint Bulk and Skull as more than the bullies they were so often seen as in the show, and I loved it. 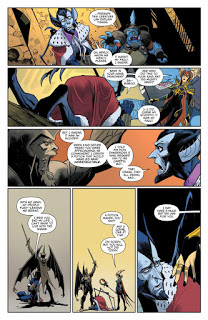 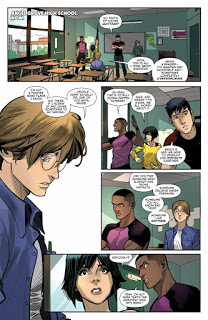 Meanwhile throughout the dance Putty Matt is trying to tell Kimberly the truth but the festivities seem to be preventing it when the real Matt arrives. Putty Matt disappears and the Rangers all run out after him, he contacts Rita begging not to attack them but to become someone else but is ordered to transform and use what he has learned to destroy the Rangers now. Jason overhears as he enters and confronts him, while morphing, and the rest of the team arrives already morphed. Putty Matt tries to talk to them, especially Kimberly to tell her that he has changed, he isn’t who or what Rita created, but she doesn’t want to hear it and shoots him with an arrow before he changes into his monster form and tells them he was sent there to destroy them. Another great scene. Parrott really knows how to play up the emotions here and have you feel for Putty Matt, and feel bad for him. 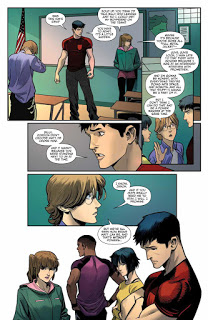 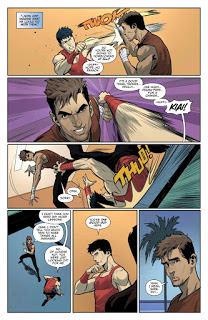 Overall this was a fun read. The book fully puts us into the Homecoming vibe, but maintains the feel of this is a Power Rangers book. We never feel like we are going to the Bayside Homecoming, or the West Beverly High Homecoming, we feel that this is an Angel Grove High Homecoming. The art here is really nice. You have this fun, animated feel to the book and it add that punch of youth to really sell that these are teenagers and not adult actors playing teenagers like the show. Mora does a great job adding little details to really sell the feel and energy of this title.