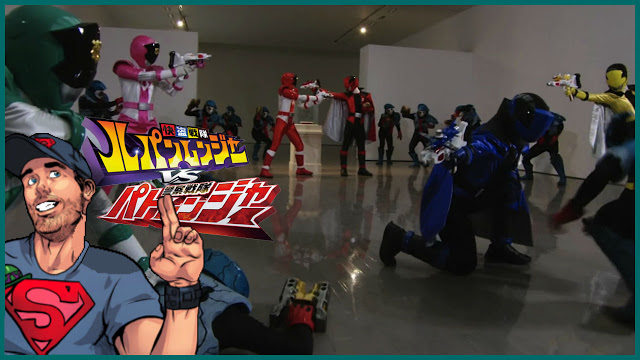 Gathered throughout his lifetime, the gentleman phantom thief Arsène Lupin assembled a vast collection of dangerous items known as the Lupin Collection. When this collection is stolen by interspace invaders known as the Gangler, two teams set out to retrieve it! The phantom thieves, Kaitou Sentai Lupinranger, who desire to live up to Lupin‘s name, aim at stealing back the collection from the Gangler. While the police force, Keisatsu Sentai Patranger, who hope to uphold justice, aim to retrieve the collection and take down the Gangler! With two rival teams confronting each other for the same goal, just who will emerge victorious? Whose side are you on?!

A little precursor to this review; I plan on reviewing the series weekly but had a few set backs so, for this week I am doing a review for episodes one and two, next week I will review episodes three and four and then the following week just review episode five with new episodes being reviewed the week they are released. 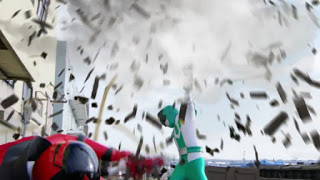 The episode picks up right where the last episode ended with the G.S.P.O. (Global Special Police Organization) arriving and telling the Lupinrangers and Garatto Nago they are all under arrest. The officers us their VS Changers to henshin and become the Keisatsu Sentai Patrangers. This leads us into a beautifully choreographed three way fight scene between the Lupinrangers, the Patrangers and Garatto Nago at the Kurehama Pier. The two teams get so engrossed in taking out each other that Garatto Nago escapes.

The Lupinragers call on their Mecha the Red, Blue and Yellow Dial Fighters which are all flying Mecha. The Patrangers then call on their Mechas the Trigger Machines 1gou, 2gou, and 3gou, which are all land vehicle Mechas. Both teams use their VS Changers to summon them as they fire from their Henshin Devices. This leads to this incredible high speed Mecha chase throughout the city with both teams pulling off amazing piloting skills and using their special moves/modes to ditch/apprehend the other. In the end the Lupinrangers get away and head back to the Bistro while the Patrangers return to their station.

Back at the Bistro the Kairi, and Touma are frustrated that the Patrangers showed up using pieces of the Lupin Collection and that they Garatto Nago got away with the piece they were sent to retrieve. But Umika is fascinated by it saying how it is interesting how both teams have the same equipment but they turned into thieves while the Patrangers turned into Police. Umika also wonders if they have to go at this alone but Kairi and Touma both say it must be them. Kairi walks out and heads to the Kurehama Pier to see Keiichiro talking to people who Garatto Nago stole from and burned down their businesses and homes. Kairi sees that the two are not so different.

We then see what brought the Lupinrangers together each of them had loved ones that were frozen by a mysterious stranger (Zamigo Delma played by Jingi Irie from Kikaider fame) and just before they could reach them they were shattered leaving nothing but broken ice behind. Kairi lost his brother, Touma lost his fiance and Umika lost her sister. As each of them stood at the site of their loved ones demise Kogure arrived offering them all a way to get their wish, by becoming the Lupinrangers and stealing back the Lupin Collection and the three make a vow at the place that would become the Bistro that no matter what they will get back the collection and destroy the Gangler so their wishes will be granted.

Garatto Nago attacks and both teams head out to take him on with the Lupinrangers arriving first. The Lupinrangers Henshin and take on Garatto Nago taking back the piece of the Lupin Collection when the Patrangers arrive and Henshin. Both teams continue to take on the Porderman and Garatto Nago. Lupin Blue is determined to take back the VS Changers from the Patrangers but Lupin Red remembers Keiichiro’s promise to the victims and decides they will let the Patrangers take care of Garatto Nago. The Patrangers take out the Porderman using their Pat MegaBos before they take on Garatto Ngo and use a new Lupin Collection piece called Good Striker. When Patranger 1 puts him onto his VS Changer and fires. Good Striker tells them to prepare to move in for the common good before they merge together as the Patron Union. Patron Union uses Patranger 1 as the main body with Patranger 2 filling in the white spots on the left side green and Patranger 3 filling in the white on the right side pink becoming one tri-colored Patranger. Together the three use the One-Shot Strike and destroy Garatto Nago leaving only his safe behind.

The Patrangers leave and we see the Lupinrangers in the Bistro wondering about the Good Striker which Umika decides she is going to call him Goodie, to which he agrees. The G.S.P.O. officers arrive at the Bistro as they sit around with Goodie but Umika manages to hide Goodie in a large pot.

This episode was just all around awesome! The choreography in this episode was just spectacular! The fight scenes are some of the best to date. The chase scene with the Mechas was just a visual treat! I also really loved when they formed the Patron Union, it provided some comedy while also filling in those white areas of the costumes, it leaves you wondering how will the Lupinrangers look as a Lupin Union? It also makes you wonder if they will use the Patron Union with other Patranger as the center, like Pink will be the center with Red and Green as the sides. They could have a lot of fun with it though.

Good Striker being the main body of the LupinKaiser, just lets us know he will also serve a similar function for the PatKaiser. Another predictable element is the cliffhanger. The episode ends with the Patranger arriving at the Bistro that the Lupinranger run, now we know they didn’t figure it out, so it has to be just cops coming there to eat.

Overall though an amazing episode a lot of great action and fight scenes but they also gave us some great character moments when we got to see the motivations behind the Lupinrangers. I am looking forward to seeing mor about them and the mysterious Zamigo Delma. I have a feeling this is going to have some twist to it. As much as I love the Lupinranger’s back story here, I hope we get to see the Patranger’s backstory as well in future episodes.

Let us know in the comments what you think of this Kaitou Sentai Lupinranger VS Keisatsu Sentai Patranger Review and don’t forget to follow us on Twitter for the latest Previews, Reviews, News and Interviews!