With about a week left, Something Real explores the boogeyman mythos. Something watches children from the darkness, and one of these creatures threatens our very existence. It’s up to an imaginative young boy to stop a creature that may have been around since creation’s first days. Explore this world in my interview with creator/writer Joey Turnage and artist/letterer Ian Miller.

In a world where boogeymen exist, Phillip Hasten is a young boy with a wonderful imagination who finds himself facing off against a boogeyman with a destructive quest for power. “Something Real” is a boogeyman who has haunted Phillip’s bloodline for ages and is terrifyingly close to his world-building project, which threatens our very existence on earth.

The project has reached its $2,500 goal and is now trying to achieve stretch goals; it will end on March 21, 2018 at 6:26 AM EDT. Rewards include digital ($4) and physical ($8) copies of the first issue, plus digital ($6) and physical ($12) previews of the upcoming comic book Holstered Heathen, as well as prints and T-shirts ($45). If you’re interested in seeing more rewards, check out their official Kickstarter page.

I spoke with the writer and artist about their nightmarish origins. Here’s what they had to say!

Me: The boogeyman has been featured in numerous horror stories. How is the boogeyman unique in your story?

Turnage: Our boogeyman is far worse and much too personal. You’ll soon realize just how good it truly is at attaching itself to the memories of the Hasten family. It’s a master at ripping you apart mentally. This skill allows our boogeyman to manipulate these poor children far too easily at times.

Me: What inspired you to write a horror story about the boogeyman?

Turnage: The boogeyman mythos has always interested me. I mean, there are literally thousands of variations of the boogeyman. From culture to culture, everyone has a unique story for this dude. However, many of these stories are surprisingly simple. I wanted to take this closet creature of ours and expand on him and his vast world, and finally give him a truly terrifying purpose in life. 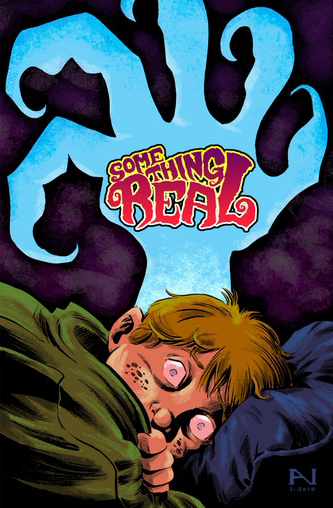 Me: What are your favorite stories that feature boogeymen and how would you say they’ve influenced your own creation?

Turnage: Again, it’s been mainly the mythos of the boogeyman that’s influenced my own variation of the character. There’s not a particular story that comes to mind. Instead, I’d say that the collective shared qualities of well-known boogeyman myths have had the greatest impact on my own unique iteration.

Me: You mention Philip and Benjamin Hasten in your Kickstarter—can you tell us the importance of their familial connection and their role in this story?

Turnage: Of course! Phillip, the young boy, is our main protagonist. His father, Benjamin Hasten, left his family some time ago for currently unknown reasons. These reasons are left unclear to Phillip but are suspected to be known by his mother, Amy. Although Benjamin has been gone, there’s still a strange connection between them all. This connection could be explained by the boogeyman’s arrival.

Me: What can you tell us about the other comic book you’re offering previews of through rewards, The Holstered Heathen?

Turnage: The Holstered Heathen is a bunch o’ fun. It’s an action-packed western that finds its characters on the edge of an apocalyptic plague. A promising remedy mysteriously         appears out of nowhere, leading a traveling medicine man to believe that he was chosen by God to be the savior of humanity. A few failed test trials later, the doctor had managed to murder several patients — two of whom belonged to an ex-sheriff’s family. This former sheriff, known as the Heathen, begins his righteous hunt for the murderer of his beloved wife and child.

Turnage: I think they’d enjoy it! I mean, that’s the whole point of this Kickstarter. I certainly didn’t fund much of the book’s production for my own financial gain. I wrote this story because I wanted fellow creators and comic enthusiasts to enjoy this story as much as I have. I love comics and I hope my own stories can impact other comic lovers.

Turnage: Make it happen. Take your amazingly unique idea and write it down. Focus every day on making your idea better. It won’t be easy to stay determined. Writing a story can be difficult and finding creative partners can be too. Just stay focused and remember how great your idea is. If you enjoy your story, then chances are other people will as well. Remember that and make it happen because it will all be worth it.

Me: What was your process like when creating the design for the boogeymen?

Miller: Joey’s synopsis for the Boogeyman boiled down to “A monster made of smoke with a tattered jacket on”, and I was free to go from there. I thought it would be cool to make him almost completely solid black, like a living shadow. But while this is his default form, he can get into your brain and become your deepest, darkest fears. So right now we’ve barely scratched the surface of what he could be!

Me: What was your favorite page/panel to draw in the first issue of Something Real #1 and why is it your favorite?

Miller: It’s funny you mention this, because I have a bunch. In the process of drawing the first scene I’d have a favorite panel or page, then I’d get a few more pages in and be like “No way, THIS is my favorite!”…..Until I got a few pages further and had ANOTHER favorite! As of now it’s the big splash panel on the last page, it was really fun drawing this big dynamic shot with some interesting inking techniques. I’d tell you more but I don’t want to spoil it!

Me: One of the rewards being offered is commission requests for you. What has been your favorite commission to draw in the past? Can you tell us about other bizarre, fun requests you’ve received in the past?

Miller: Some of the most fun commissions I’ve worked on were actually my first paying gigs. I was commissioned by a Christian apparel company to make a series of graphics for T-shirts featuring Biblical characters and scenes in a comic book style. I’m not religious, but I can definitely see how religion and ancient mythology had a hand in forming the basis of what we call superheroes today. After all, how many times has Samson been depicted as an action hero? I also became an official Wu-Tang Killa Bee when I designed the cover for the re-release of U-God’s “The Keynote Speaker” album.

As for bizarre requests…….Let’s just say I’ve discovered that there’s a market for things like Foghorn Leghorn in a diaper and pregnant Goku…..

Miller: Something Real is perfect for people who were afraid of the dark as kids, or even as adults. This is a very universal theme that I know will hit home with many people and is something they will enjoy. And hey, who doesn’t like to be scared!  Joey and I are also lifelong comic book and horror movie fans, so we’re using our expertise to craft the best horror story we can. It’s even got tender moments for those of who you might get TOO scared!

In short, we put a lot of TLC into this book, and the support we’ve gotten from our amazing backers and fans on social media tells us that we have something special here. By pledging you can be a part of making this story a reality. We also have a bunch of cool stretch rewards coming up, including some extra pages of fan art in the back of the first issue and an exclusive offer of original art drawn by me. There’s something for everybody here!

DRAW EVERY DAY!!! There’s no magic pill or secret potion that will make you better. The only way to improve is to keep drawing and learn from your mistakes, and slowly but surely you’ll see results. And if you’re struggling to figure out how to draw something then there’s no shame in using references to see how the real object or pose works in real life. All your favorite artists probably use (and should use) references. Overall, it’s a long process, but if you love drawing then it will be fun.

Likewise, don’t get into comics if you can’t NOT create comics. While this is the most fun I’ve ever had at a job, it’s also the hardest I’ve ever worked at a job…..But I can’t think of doing anything else. If you believe in what you’re doing and don’t mind the long hours then you’ll definitely find it to be incredibly fulfilling and it won’t feel like work!

Me: Thanks for taking the time to feed into our nightmares, guys! If you’re reading this and interested in Something Real, check out the Kickstarter here.

Blood on the Tracks