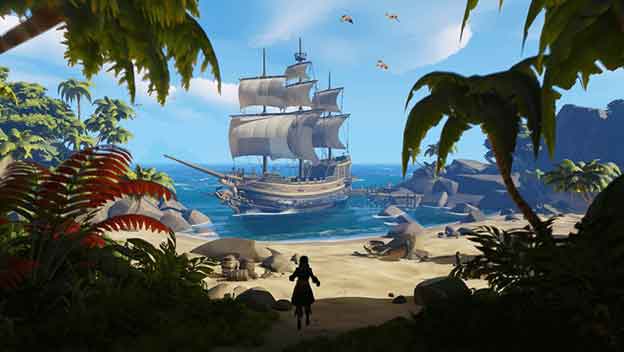 Sea of Thieves is less than a week from release, but for the past few weekends we’ve had the pleasure to play 3 weekends in a row of closed beta and a final weeks worth of extra content open beta. Here are my though’s after playing the betas…
Sea of Thieves by Rare is an open (shared) world where you create your own story as you gain reputation, gold, and titles on the way to becoming a pirate legend. From launch the game will continue to update and add newer things to keep player coming back for more.

Since E3 2017 I had Sea of Thieves pre-ordered because the idea behind the game blew me away then. Now after playing the betas I can say if I had not pre-ordered the game I absolutely would! It was a huge enjoyment taking to the open seas, granted a bit stressful and frustrating at times (depending on the players I encountered) but still extremely amazing experience. If the beta was just a taste of what the whole game is about, I’m super excited to finally get my hands on my copy next week. Sea of Thieves will be released on March 20th 2018, get your hands on a copy before your beaten out by the pirate in front of you!

If you would like to hear more of my thoughts on the beta here are 2 videos on my thoughts on week 1-3 of the closed beta and the recent final open beta:

Let us know in the comments what you think of this Dark Avenger C86 Article and don’t forget to follow us on Twitter for the latest Previews, Reviews, News and Interviews!