For fans of fan of Stranger Things, The Goonies, and The Maze Runner, Geoff Weber presents his Kickstarter for The Scientists #1. This YA adventure has a lot of heart and began over 10 years ago with Geoff Weber and Trent Beckett. Trent sadly passed away in 2007. Geoff talks in-depth about the series and its importance to him after the death of his friend and co-creator.

The Scientists follows Stuart Chen and other prodigies who were going to a national science fair… but instead they wake up in a strange experimental facility. Using their intelligence, these misfits need to face off against various dangers, including carnivorous plants and a relentless killer robot!

Geoff Weber is the artist and co-creator of The Scientists and he is also a magician, inventor, game designer, husband, and father of four boys. He worked alongside his friend Trent Beckett, writer of The Scientists. Trent worked as a DJ and was a quarter-finalist in the ASA Screenwriter’s Competition. The Scientists was the last project he worked on with Geoff before his death in 2007.

This Kickstarter is for the first 44 page issue of the four issue mini-series The Scientists. The cover is photographed from a 3d paper diorama. The project has a $2,000 goal that it needs to hit by April 10, 2018 at 11:59 PM EDT. Rewards include digital ($5) and physical ($15) copies of the first issue, a Science of Synthwave soundtrack featuring 20 original synthwave tracks ($25), a variant cover that includes 3-d glasses ($50), as well as several other rewards that you can see on the Kickstarter page.

Hear some personal stories about the behind-the-scenes world of The Scientists from artist Geoff Weber (he’ll even email you the first 32 pages for free right now).

Me: Can you share with us the personal story behind the making of this comic and the unfortunate loss of your co-creator?

Weber: I began The Scientists as a screenplay with my writing partner Trent Becket back in 2005. This was actually the third feature length screenplay that we collaborated on together. As I began to get more interested in creating comics, I developed an art-style I called “fast painting”, which I thought I might be able to use to create a full length graphic novel. I decided to adapt The Scientists, because I felt it would be perfectly suited for the comics’ medium.

I had only gotten a little ways into it when I lost my friend. It took me a while to get back to comic-creating, but I found that continuing work on it has helped me to maintain a feeling of connection. I wanted to finish this story as a way to honor him. He was a really funny and talented writer and my wish is that more people will be able to discover that, and in doing so, I will be able to keep his memory alive. 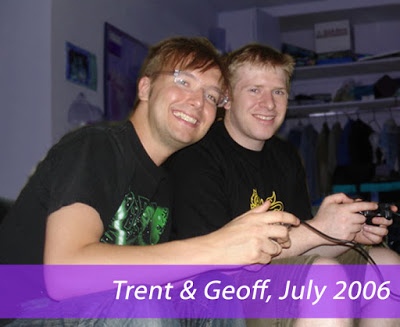 Me: What can you tell us about the ragtag team of misfits in The Scientists?

Weber: Part one is called “The Prodigies” and that is exactly who you get to meet in this book. Each one has their own scientific specialty, as well as a myriad of external pressures that many kids their age have to deal with, such as family and school. Over the course of this adventure, they will learn they are stronger together and are forced to confront the pressures they put on themselves.

If you want a more detailed breakdown, read on!

There’s our main hero: Stuart. He has had to live in the shadow of his successful father. People tend to second guess him and question if he has truly earned his place. If they got to know him, they would realize that his love of science is deep and pure. He is a great problem solver and creative thinker. His lack of self-confidence can sometimes be a problem, but he has natural leadership qualities that shine under pressure!

Whitney is this southern girl who recently transferred to Stuart’s school. She has a bit of a competitive streak and will go to great lengths to ensure that she has outdone anyone else. Don’t make the mistake of underestimating her! She has no problem holding her own amongst all these boys.

Spencer is an easy-going, West Coast surfer dude with a natural charisma, which instantly makes people look to him for leadership. It also makes him popular with Whitney, the girl whom Stuart had a crush on back in school. This sets up a bit of a rivalry between Spencer and Stuart; not only for Whitney’s attention, but also for who will be the one the group will listen to when it comes to making decisions.

Then there’s Bently. He has been called “pipsqueak”, “paranoid”, “space case”… but he has a good reason for his nervous and suspicious nature. He experienced some unexplainable phenomenon at the tender age of five while living in India. His mother forbid him from speaking out to prevent embarrassing the family over a story people would never believe.

Matt & Tony are two tough-talking brothers from Brooklyn who try to bully those around them when they’re not fighting with each other. Their brusque exterior is partly a survival tactic that they needed to help cope with an abusive father and an environment that viewed intellectual pursuits as strange and only for the weak.

Rick is a bit of wildcard among the group. Nobody really seems to know much about him, where he came from him, or what his scientific specialty is (although someone did overhear him mutter something about woodshop once). He seems like he might be a little too old to be here, and definitely has a bit of the “too cool for school” bad boy vibe.

Next is Billy. He grew up in a wealthy family, so while other kids were learning to ride a bike, he was learning to fly a plane. His parents could afford to get him the best tutors, but his genius and drive to succeed was something that money couldn’t buy. It came from within him. He wasn’t just content to fly airplanes. He designed and built his own!

One of the more mysterious prodigies is Miles. Miles doesn’t say a whole lot. He’s been described as the “Michelangelo of Math” by the media and he prefers to let his work speak for him. People are sometimes afraid of him and his preternatural abilities, but his family thinks he is their golden ticket to money and fame. After proving Fermat’s last theorem, the most notorious problem in the history of mathematics, Miles is simply looking for his next challenge.

Me: What are some of the obstacles the group will be facing?

Weber: They are kidnapped on their way to a science fair and thrust into this unfamiliar environment straight out of a science fiction movie. They wake up wearing these space suits, with no clue how where they are, who put them there, or why this is happening. They also worry about who they can trust when they begin to suspect there might be a traitor in their midst. In addition to these mysteries, they must contend with poisonous air, carnivorous plants, and a relentless killer robot.

Me: In your Kickstarter you mention how the series will appeal to fans of Stranger Things, The Goonies, and The Maze Runner. What about The Scientists made you compare it to these works in particular?

Weber: The Scientists was really strongly influenced by those ensemble kid adventures of the 80s like The Goonies and Stand by Me. The Scientists was written before The Maze Runner, but it is similar in that it has a group of kids trying to escape from an experiment, and the reason they are there is a bit of a mystery. Stranger Things is a more recent example of a sci-fi story led by a young cast and it also has that strong 80s connection.

In addition, the music of Stranger things is a genre called synthwave that has recently come into prominence. It is a synthesizer-based music that is reminiscent of 1980s movie soundtracks. Because of that connection, I have partnered with an amazing group of musicians to put together a companion soundtrack for The Scientists.

Weber: When I first proposed the idea of creating this soundtrack, I suggested the tone I was looking for was “cinematic” and “sci-fi” synthwave. Each musician approached it in a unique way. Some read through my comic and sent me songs that matched certain scenes along with an explanation of why they felt it fit. Other artists asked me to choose a song from several that they felt might be suitable. Another asked me to suggest a theme that they could compose a song around; I suggested “Stronger Together”, and they are now working on a song with that title, which will be evocative of The Goonies theme, but with Billy Idol style vocals.

Me: You also mention in the Kickstarter that you’re a ComixLaunch alumni. Can you tell us a bit about ComixLaunch and what it has taught you about Kickstarters that you feel helps you with your campaign?

Weber: ComixLaunch is a podcast and online course created by Tyler James that addresses the specific needs and concerns facing comic creators trying to bring their work to Kickstarter and build an email fan list. This was a really helpful resource, because I could turn to this group of experienced Kickstarter veterans and get feedback on my campaign as I was putting it together.

Me: What do you think is the number one reason why people should pledge money to your Kickstarter?

Weber: The Scientists is a really cool story and it doesn’t look like anything else out there! You will love it! 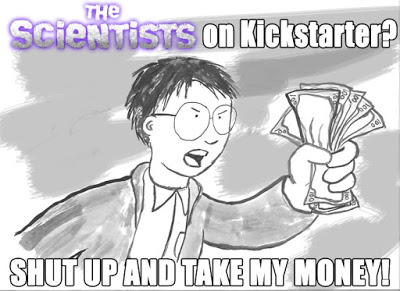 Me: What inspirational words do you have for aspiring comic book writers and artists?

Weber: Embrace what make your work unique! I don’t have a mainstream look to my art, but that is what makes me stand out. Make the comic that only you could make!

Me: Thank you for sharing such personal insight with us. If you’re reading this and think you’d like to get sciency, check out The Scientists #1 Kickstarter here.