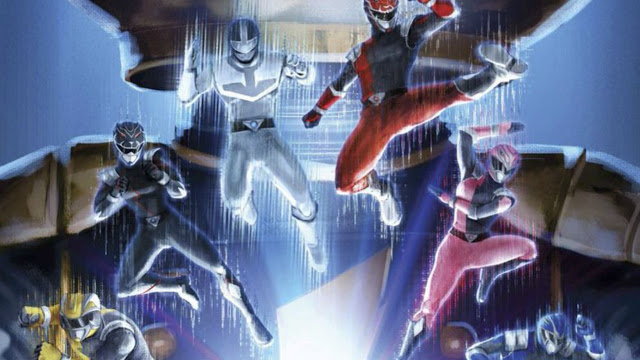 Previously in Power Rangers: The Rangers have each been facing their own struggles balancing being a Ranger and being themselves. Zack has a secret admirer and is ready to ask them to the dance. Kimberly‘s boyfriend Matt hasn’t been the same since he was hurt in an attack from Rita, because she replaced him with a Putty, and the Rangers are starting to notice something is different. Billy has been insecure with his role on the team and is ready to allow Matt to take his spot. Trini is crushing on Jason, but hasn’t told him. Matt told Jason what everyone but him knows, that Trini likes him and Jason is afraid to date a Ranger because of how it may affect the team. While at Homecoming the real Matt showed up, but can the Rangers take out Putty Matt? Find out next in this review of GO, GO POWER RANGERS #8! 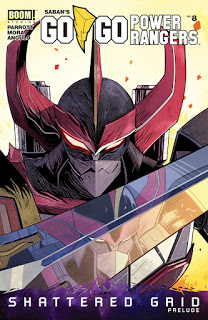 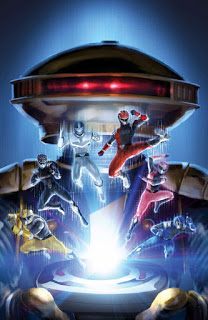 The issue starts off with a flashback scene to over ten million years ago, before the final battle between Zordon and Rita which lead to Zordon being trapped as an interdimensional being and Rita being place in a space dumpster. Goldar leads an attack on Centrax Four which ends in his victory for his Empress Rita. Rita tells him he is a merciless warrior, but then turns and lets him know that she knows he is spying for Lord Zedd. Rita gives Goldar two options to serve Lord Zedd, which will ultimately end in his destruction or to serve her and get revenge on Lord Zedd, the man who murdered his brother for just questioning him. Goldar kneels and pledges his weapon and will to Rita on the blood of his pack. Ryan Parrot continues to explore Rita’s henchmen in a way that given them a tragic and at times almost noble twist that add so many more dimensions to what some say are some of the silliest henchmen of all of Power Rangers. These little stories make me want Parrott to either do a story arc, or at the very least a story in an annual or something that shows us that final war between Rita and Zordon. 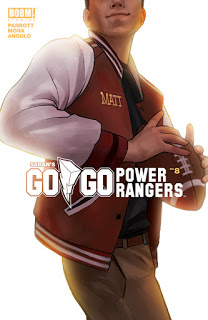 We return to the Angel Grove Homecoming dance as the entire school is trying to run out of the building because of the Putty monster that was disguised as Matt has transformed and taking on the Power Rangers in a very personal battle. The real Matt is looking around for Kimberly and Zack who are no where to be found because they are inside morphed and taking on Putty Matt. This scene speaks a lot about Matt, that even though he just survived being captured by Rita while a Putty him infiltrated his life, he is concerned for his best friend Zack and his girlfriend Kimberly. Parrott now has me #ContinuityJay saying to hell with continuity and give this man a Power Coin! I can easily see Matt becoming a new Ranger in this bold new world that Parrott and Higgins have crafted in the two comics. 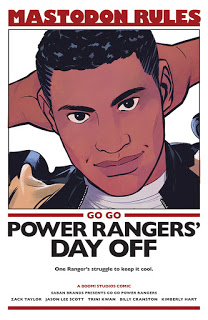 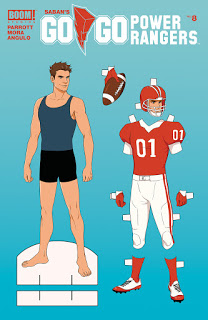 The Rangers take on Putty Matt who matches them move for move while getting into their mind by changing into each of the Rangers and using what he learned to put them off their game. Playing off of their insecurities like telling Zack he knows he fears he will never be strong enough or fast enough. Then he goes after Jason and Trini using their feelings for each other and how Billy is a stand in for Jason as Trini’s date to distract them. But it is Kimberly who has the most emotional reaction because she had been dating this Putty for a while now and she feels betrayed, her emotions jump out at you they are so raw. 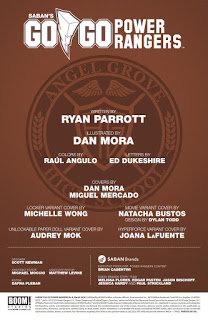 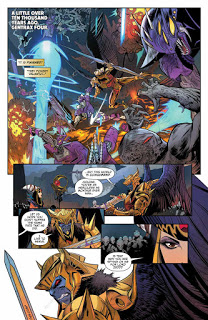 During this whole time Putty Matt is trying to talk to the Rangers have them surrender so they can be spared. This is something rare, we hardly ever get a villain who doesn’t want to be a villain, most are just monsters sent to destroy the Power Rangers but over the years we have seen a few that aren’t evil and don’t want to fight. Rita is frustrated with the Putty so she has Baboo use the puppeteer potion that allows her to control the Putty. But the Rangers call on their Dinozords and thanks to some fast thinking from Billy they defeat the Putty monster. 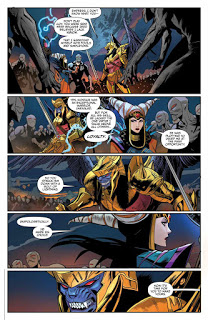 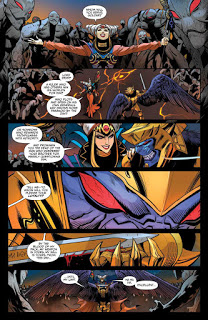 The team returns to the Command Center, where they congratulate Billy and ask if he is staying on the team. Bat and Angel Grove High Bulk and Skull get dumped by their Homecoming dates because of Bulk removing himself from the Homecoming Court Ballot last issue. Trini and Jason have a talk, where Trini says Putty Matt was just messing with him, that she has no feelings for him other than friends. Billy’s dad finds the VR helmet in the trash and the two have a talk where his father says he is proud of Billy and knows he has to do what he wants to do with his life. Zack & Kimberly pay Matt a visit, but he is having a hard time he’s not eating, barley talking and doesn’t come down to see them. Back at the Juice Bar, Kimberly is doing the Balance Beam while talking to Zack who about dating someone while being a Ranger. Meanwhile a hand that looks like Alpha’s hands a mysterious gloved hand a crystal. The crystal is supposed to aid in their mission and we then see that the two beings are Finster Five and the mysterious new Ranger Slayer. Again, Parrot does a great job walking that line between the action and adventure of the Rangers and the grounded life the teens. This is what makes this book so great, it isn’t just the big battles, it is about how they deal with that aftermath. 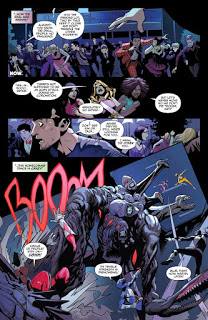 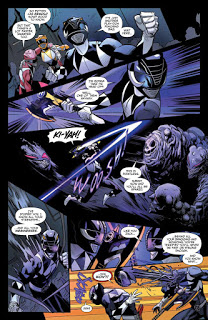 The art here is great, Dan Mora and Raúl Angulo have found away to take a show based on a Japanese show (Super Sentai) and bring an almost anime vibe to the book. The way the art flows, and the panels capture the action make you feel like a part of the action. The colors are so vibrant that they just pop off the page and make you feel like you’re watching an animated series. 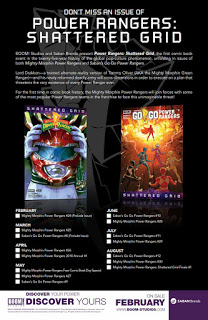 This is where Parrott excels telling these stories where he really conveys the emotions, and demonstrates the complexity of it all. We don’t just feel for the heroes, we feel for the villains as well. The ending with them each dealing with the affects of this arc makes you want to have even more, but then we get the big Shattered Grid moment and it all gets real.

Stay tuned to Comic Frontline tonight at 10:00 PM EST for my Shattered Grid LIVE show where I will discuss the latest episode of Power Rangers HyperForce and I will discuss more Saban’s Go, Go Power Rangers #8 and the Ranger Slayer!
To find a comic shop near you, visit Comic Shop Locator or call 1-888-comicbook.
For comics anytime, anywhere check out BOOM! Studios Store and BOOM! Events
Follow & Like On Twitter, Facebook, & Tumblr
For Power Rangers anytime, anywhere check out Power Rangers and Ranger Nation
Follow & Like On Twitter, Facebook, Google +, YouTube, & Instagram