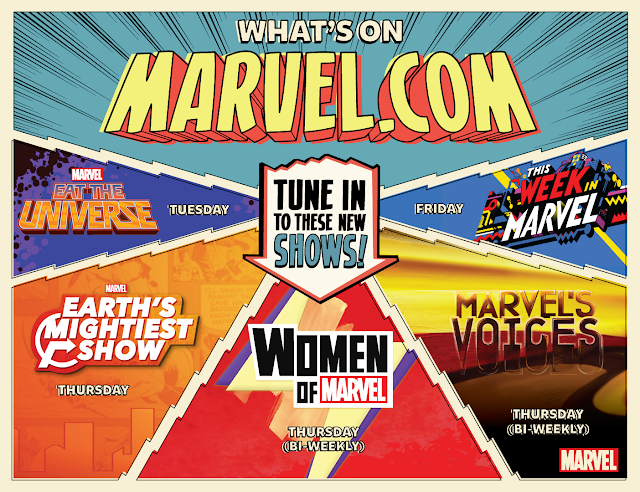 From breaking news to new cooking ideas, Marvel’s new digital series will provide fans a variety of new content to experience across Marvel and social media. At C2E2, Marvel New Media announced an all-new schedule of digital series featuring a variety of programming for both die-hard and casual Marvel fans. These new digital series include relaunched versions of its continuing popular shows such as This Week in Marvel and Women of Marvel; and new series like Earth’s Mightiest Show, Marvel’s Voices, Marvel’s Eat the Universe and Marvel’s first-ever scripted podcast Wolverine: The Long Night for fans to enjoy.

Marvel New Media, a division of Marvel Entertainment, is focused on producing content from all aspects of the Marvel Universe, including breaking Marvel news, non-fiction storytelling, original digital series, podcasts, and other interactive content to reach new audiences with various interests.

“Marvel New Media is focused on nurturing a more intimate and approachable relationship with both our super fans and casual fans by embracing and refreshing Marvel’s fundamental brand attributes, and by redefining how those fans experience the Marvel Universe across all platforms. As we launch and expand these new digital series, we will be introducing fans to a whole new perspective of the brand to reflect the core values of Marvel, our heroes, and extending into the real-life Super Heroes that inspire us every day.”

This Week In Marvel

This Week In Marvel offers a weekly long-form, up-tempo, deep dive into everything a fan not only wants, but needs to know about their favorite Marvel characters and stories. Hosts Ryan Penagos and Jamie Frevele lay out all the amazing, uncanny, and astonishing details bouncing around the Marvel Universe that week, engage with the community, and conduct in-depth podcast and on-camera interviews with an array of creatives—both within the House of Ideas, and those inspired by the Marvel brand. (Relaunched in April 2018; originally launched in November 2011)
Earth’s Mightiest Show

Women of Marvel is a bi-weekly podcast and series of on-camera interviews co-hosted by Sana Amanat and Judy Stephens. Women of Marvel provides a true behind-the-scenes look into the storytelling process at Marvel through the prism of the women working in an industry that has been historically male dominated. Women of Marvel celebrates the stories of both the creative forces that have built Marvel’s legacy as well as many other amazing women across pop culture. (Relaunched in February 2018; originally launched in June 2014)

The world outside our window is filled with a menagerie of unique people. Marvel’s Voices highlights how these different perspectives make for the best stories by shining a spotlight on the creators bringing diverse characters, viewpoints, and voices to the forefront of the entertainment industry. Hosted by Angelique Roche and released bi-weekly as both a podcast and set of video clips, these in-depth interviews are rooted in Marvel, but branch out into all walks of life, from literature to comedy to STEM. (Launched in April 2018)

In Marvel’s Eat the Universe, celebrity Chef Justin Warner welcomes a wide-array of pop culture influencers into his kitchen to cook dishes inspired by Marvel’s rich comic history and talk about their love of the brand, Super Heroes, life, food and everything in between. (Launched in April 2018)

Wolverine: The Long Night Marvel’s highly anticipated first-ever scripted podcast, made its debut earlier last month with top podcast listening service and content network Stitcher. The Wolverine: The Long Night story is a captivating hybrid of mystery and the larger-scale fantasy of the Marvel
Universe. It follows agents Sally Pierce (Celia Keenan-Bolger) and Tad Marshall (Ato Essandoh) as they arrive in the fictional town of Burns, Alaska, to investigate a series of murders and quickly discover the town lives in fear of a serial killer. The agents team up with deputy Bobby Reid (Andrew Keenan-Bolger) to investigate their main suspect, Logan (Richard Armitage). Their search leads them on a fox hunt through the mysterious and corrupt town. For more information, visit the Wolverine Podcast. (Launched in March 2018)