Take a trip back to the 80s with the slasher horror comic we’re featuring today: aXmaniac! Enjoy horror tropes and archetypes with creator and die-hard horror fan Ammar Al-Chalabi.

In 1982, a group of friends spend summer break at a cabin in the woods (because when has that ever gone wrong?). After getting partially unpacked, Jeff (the prep) and Emma (the airhead) go off into the woods to have sex—and are rudely interrupted when an axe-wielding maniac cuts Emma’s head open. And that’s only five pages in! You get a horror movie condensed into a 23 page comic book, with the rest of the characters fighting for their lives, including Dave (the jock), Lisa (the trailer trash) and Alex (the loner).The creator of the comic book is Ammar Al-Chalabi. He is a freelance illustrator/comic artist from the Netherlands. His work includes the co-creation of WART and the interior art for Toy-Z. A huge horror fan, Ammar is both the writer and artist for aXmaniac, which has the potential to become a mini-series!

This Kickstarter has a $1,768 goal that it’s attempting to reach by June 1, 2018 at 5:25 AM EDT. Rewards include digital (about $4) and physical (about $11) copies of the comic book as well as several options for art prints starting at about $14 and a special Kickstarter offer to get a drawing of you getting killed by the aXmaniac (about $63)! To see the rest of the rewards, check out the aXmaniac Kickstarter.

I spoke with writer/artist Ammar Al-Chalabi about his take on the slasher genre.

Me: What do you love about the slasher genre that’s reflected in aXmaniac?

Al-Chalabi: The slasher genre to me is almost like a superhero film. You see your favorite hero (killer) getting rid of all those annoying and pesky teens. And of course it’s an added bonus if the killer looks cool or has a fun gimmick.

Reflected in aXmaniac is the rollercoaster ride of such a movie with a cool looking killer. The comic, like most of those movies, doesn’t apologize for their sleaziness and exploitation. That is what I wanted to convey in aXmaniac. Good friendly violent fun.

Me: How is aXmaniac unique from other horror movie classics?

Al-Chalabi: On the surface it looks like a pretty standard slasher story, but if I were to make a follow up you’ll see that the main protagonist will have a character arc.

I think the ending of this story is also what will set it apart from others.

Me: Why did you choose to set the comic in the 80s?

Al-Chalabi: The 80s was the golden age of slasher movies. I wanted aXmaniac to feel like it could have been a movie in that period. Riding on the success of Halloween and Friday the 13th. There is just a charm about 80s horror that I love so very much.

Me: What are your favorite horror movie tropes and what are some of the ones we can find in aXmaniac?

Al-Chalabi: I love the “teens know something is wrong but the adults won’t have any of that.” It is featured a little in aXmaniac.

The infamous “the killer is too cool to run but can keep up.” Now, people do run away from the aXmaniac in my comic, but he always seems to find them!

And any good slasher should have a couple getting intimate and being severely punished for that. This is definitely in my comic!

Al-Chalabi: You can’t go wrong with a good ‘ol bait-n-switch where you expect that jump scare but nothing happens. And I love a creative (and gory) death scene.

My favorite Archetype is the undead slasher stopping at nothing to get to its prey!

No small buildup like a ghost would do (shutting doors or making stuff disappear), but immediately slashing away like nobody’s business. 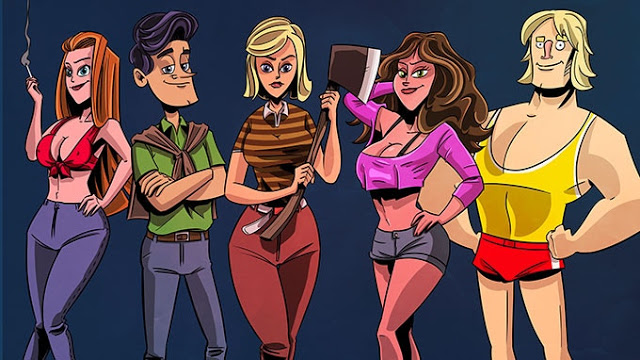 Me: You’ve basically condensed a movie into 23 pages. Do you have any future plans to expand aXmaniac into a mini-series or ongoing series?

Al-Chalabi: When writing aXmaniac I made a list of stuff I wanted to include in my comic. This list was very long and only 1/3 was used in the current comic. If people enjoy aXmaniac I would really love to make aXmaniac 2! I’d probably go for a mini-series of 4 issues if there is a demand for it.

Al-Chalabi: My favorite by far is Jason of the Friday the 13th series. I love how blunt those movies are unlike Nightmare on Elm Street where Freddy tricks teens.

Me: Why did you decide to use a more cartoony style for your horror comic?

Al-Chalabi: The style you see in the comic and promotional art is my “default” style. I feel comfortable drawing this and I personally like the cartoony look included in a story that is taken seriously. There are a lot of more serious looking horror books out there. I hope that my drawing style will be a breath of fresh air in the world of horror comics.

Me: What is the number one reason why you think people should back your Kickstarter?

Al-Chalabi: The product of this Kickstarter is made by someone who has a love for a niche genre of movies. I wanted to tell a back to basics slasher story and I believe people who like this genre will very much enjoy my book.

Al-Chalabi: Start out small. Just make that first book of that epic tale you want to tell. Write your story and draw all the pages. Once you have a book all done you’ll be ahead of everyone who keeps taking about starting a project.

Also keep trying. Get better with each book or page you make.

Me: Thank you for taking the time to chop some heads with me. If you’re reading this and want to check out the Kickstarter for yourself, see it here.