Enjoy the fantasy world of Ruby and the Warriors of Dion. Get ready for magic and revenge in this latest Kickstarter project!

Ruby is a mage on a quest for revenge. Her family is murdered by forces under the command of the evil warlock, Hadomeer. So Ruby goes searching for the Lost Grimoire, which contains all the secrets of the ancient world in order to match Hadomeer’s army and magic. During her journey, Ruby will further hone her magic with new spells and meet new warriors that could serve as powerful allies to her.

The fantasy series is written by Guido Martinez, writer of such titles as POM, Knight and Chase, which are also available in the campaign. The creator/artist is Silvio Spotti, who has worked on numerous books including Green Lantern, Teen Titans, Scooby Doo and Wynnona Earp. The colorist is Vittorio Astone, whose had several short stories publishing in Heavy Metal Magazine and is working with Vault Comics on an upcoming comic series. The book is being published by Evoluzione Publishing, founded by Marcel Dupree, and will be the first comic book series in their Spotti Entertainment imprint.

I spoke with Silvio Spotti about the world of Ruby and the Warriors of Dion and his imprint helming it, Spotti Entertainment.

Me: You work as an artist, writer and character designer. Which of these abilities have you used on this project?

Spotti: I had to use all this abilities at first. To create the characters, make the designs for all of them and have a plot for the story.

Me: Which do you enjoy doing the most on this project and why?

Spotti: Oh, I enjoy making the art. It´s a lot of fun. And the book is being written by Guido Martinez with colors by Vittorio Astone. I really have a good time doing the pages.

Me: What initially inspired the magical world of Ruby and the Warriors of Dion?

Spotti: Ruby and the Warriors of Dion is inspired by comics, anime, movies and TV series that I really like. Anime like Dragon Ball and Dragon Ball Z. Movies like Underworld, The Professional and The Messenger.  Also TV Shows like Game of Thrones and Taboo.

Me: How would you describe Ruby and her companions’ personalities?

Spotti: Ruby was an innocent girl that now has to fight, not only for herself but for a lot of people that will come into her life due to the events and circumstances that will happen in the book.

Her first companion on this book will be Tim, her cousin. He is a very smart kid, still innocent as all kids should be. But his life will have a big turn and doing magic is a family thing. Tim will be very active in the universe of Ruby.

Me: You’ve worked for numerous companies, including IDW, Avatar Press, Boom, DC and Disney. How have your experiences at each of these companies differed and what is it like self-publishing for a chance?

Spotti: Working for companies like this is a lot of responsibility. Because most of the time, you will be working with very well-known characters, like let´s say Green Lantern or Wynonna Earp for example.
Self-publishing makes me free to develop the universe of my characters the way that I like. But at the same time the responsibility to do my best is the same. In fact, you have to think about it all. From script to how it will be printed.

Me: Paint us a picture of what your life would be like if you lived in Ruby’s world?

Spotti: I would be like a Dungeon Master. Like the character from the cartoon Dungeons and Dragons.

Me: What type of campaign would you set your adventurers out on?

Spotti: They would have to go to all places in Dion and find the best warriors to fight the evil Hadomeer.

Me: If you had the ability to cast only one of Ruby’s magical spells, which would you choose and why?

Spotti: I would like to control the elements of water. Imagine if you can help people without water by making it rain. This could be the best thing.

Me: You started the artist focused imprint Spotti Entertainment. Could you tell us more about this and the inspiration behind its creation?

Spotti: I was invited by Marcel Dupree to do an imprint for his company Evoluzione Publishing. Spotti Entertainment is a company focused on the work of its artists and artists’ creations. So Ruby and the Warriors of Dion is my book and after it, we will have another artist book on Kickstarter while I work on Ruby #2.

Me: What are your future plans for comic book series at Spotti Entertainment?

Spotti: We have a horror book named Infinite Punishment. I have plans for a sci-fi book. But I´m still working on its roots.

Me: You recently hit your $3,000 stretch goal for the 5 comic digital bundle. Can you tell us a bit more about each of these comics?

Spotti: We wanted to say thank you to our supporters by giving them other books in the fantasy genre. We wanted to use our success to highlight other creators.

I don´t have the liberty to talk about other writers and artists work. The only thing that I can say is that I´m very lucky to have their books in our campaign; they are very cool books with good stories and art. I will be there for them too in the future. As indies we do the best we can to support each other so we can do our best.

Me: What is the number one reason you think people should pledge this project?

Me: What inspirational words do you have for aspiring writers, artists and character designers in the comic book industry?

Spotti: Well. Work hard, put your heart in it and never give up. No matter what some people will say about your work along the way.

Me: Thanks for the inspirational words, Silvio. And best of luck with the beginning of Spotti Entertainment! If you’re reading this and interested in joining in on this new imprint with their first fantasy series, check out the Kickstarter here. 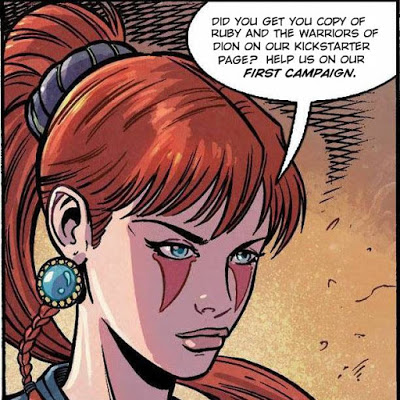