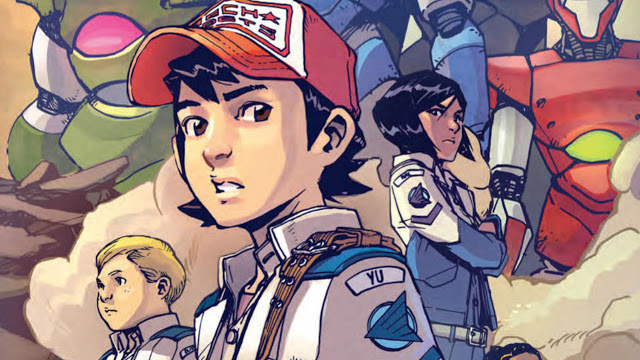 BOOM! Studios has shared with Comic Frontline a preview of their upcoming release of MECH CADET YU VOL. 1 TPB. The trade collects issues #1 – #4 and an exclusive behind-the-scenes look at the making of Mech Cadet Yu, including the comic short story that inspired the series. Greg Pak (Totally Awesome Hulk) and Takeshi Miyazawa (Ms. Marvel) team up for an action-packed and  heartfelt underdog story about the true makings of heroism and friendship in the face of overwhelming odds.

Once a year, giant robots from outer space come to Earth and bond with young cadets from the elite Sky Corps Academy to defend the world from the terrifying aliens known as the Sharg. It’s a great honor to be chosen, but this year…well, the wrong kid was picked.