For the first time ever, Kickstart the Week is showcasing a video game! Ready for an adventure-RPG inspired by legends like Zelda, Pokémon and Cuphead? Then hop aboard a boat and begin your journey in Steamboat Billy: The Curse of the Leviathan!

The Great Leviathan has cursed the world into monochromatic chaos! It’s your mission to explore the land and the sea, collect treasures and creatures, fight the Leviathan’s cronies and rebuild the city of Star Harbor. And restore all the color to the world!

Steamboat Billy’s design is inspired by American cartoons from the 1930s (particularly Disney) and has an anime flair too! It’s available in seven languages on PC, PS4, Xbox One and Nintendo Switch.

I spoke to Christopher Chancey and Anthony Vaucheret about the world of Steamboat Billy below.

Me: How did you come up with your four pillars of design, Exploration, Collection, Crafting and Combat?

Christopher: There are many ways to start a brainstorm for a new project, but with a postgraduate degree in video game design, my reflex is always to start with design pillars. Anthony, our Artistic Director, is the one who came up with the original concept where you would be on a boat and fish for creatures that you could capture and then have them fight with you à la Pokémon. So we already had Collection and Combat from Anthony, but the picture was a bit incomplete for me so we decided to add to the experience through Exploration, reminiscent to The Legend of Zelda: The Wind Waker. Finally, we wanted to give additional interactions and importance to the fishing mechanic so we figured that you could salvage materials through fishing and that you could rebuild a city with those materials and that’s when Crafting came in.

Me: Why are these pillars so important in Steamboat Billy?

Christopher: When you are making a game of the scope we are going for, it’s important to have a focused vision, because there are too many opportunities where the game can go and you can easily get distracted with mechanics that aren’t core to the experience. When you focus on design pillars, you are forcing yourself to think of the targeted experience first, which helps the game keep its integrity and ends up making better games in the end. We’ve made enough unfocused games in the past to now know things like this are what make games successful.

Me: Which of the creatures in Steamboat Billy is your favorite and why?

Christopher: Mini-Napoleon, I can’t pinpoint why, but he looks so tiny, cute and determined to win that I can’t help but like that one the most.

Anthony: You cannot do this to me, they are all my children! I love them all equally! *laughs*

Me: There’s an option to get Kickstarter exclusive pets. What can you tell us about each of these pets and which one is your personal favorite?

Anthony: As a gamer, I always liked having a pet following me around in games. Since this is an exploration game, I found it interesting to have a friend following us visually, kind of like in Pokémon Yellow where Pikachu would follow you around throughout your journey. My favorite is definitely Piñato, because we can mount him and who doesn’t like an epic mount!?

Christopher: Mine is Mr. Molson. He’s a human’s best friend you know… 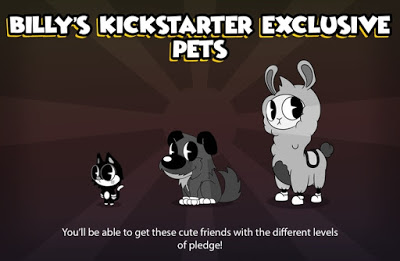 Me: If you could spend an hour in the world of Steamboat Billy, where would you go? What would you do?

Christopher: I’d hide in a broken down shack in Star Harbor and wait for rescue, I don’t have half the courage Billy does. *laughs*

Anthony: The game would probably tell me where to go and I would probably spend all of my time going rescuing inhabitants and crafting instead of the main storyline.

Me: One of the rewards people can get from this project is your previously funded game on Kickstarter, Epic Manager. What can you tell us about this game and why will people who will enjoy Steamboat Billy enjoy this other game?

Christopher: Epic Manager was the studio’s first commercialized game and is a game we had also Kickstarted, so we wanted to remind our backers that we aren’t among those studios who don’t deliver the games they promise to make. The game we delivered on Steam was so far above what we had initially promised on Kickstarter, especially considering the limited budget we had at the time, that we felt it would be cool for people to see the evolution of where we’ve been to where we are now. The game is a unique management-RPG that puts you as the CEO of an Adventuring Agency where you need to recruit adventurers to go out on the world map and do quests to bring back gold to the agency. It offers a lot of weird mechanics that have never been seen in that form. The RPG aspects of Epic Manager are really complex and fleshed out, so people who are backing Steamboat Billy for the RPG combat will be convinced of how good we can make it.

Me: What can you tell us about ManaVoid Entertainment’s history and their mission statement?

Christopher: ManaVoid is a video game development company based in Montreal, Canada that was founded in 2014. Our mission is to create gaming experiences that blend known genres, themes and mechanics in new and different ways in order to achieve something completely unique.

Me: Christopher, you’ve worked in numerous gaming departments, including Programming, Narrative Design, Game Design, Integration and Marketing. Which of these is your favorite and can you give us an example of some of the work you’re most proud of in that department?

Christopher: I really enjoyed doing the Narrative Design behind Epic Manager. There was so many different branching storylines in the game that people aren’t even aware of, I think I wrote something like 800 pages worth of narrative in that game. It was quite a feat and I’m certainly proud of that.

Me: Anthony, which Disney films have influenced your work the most? How have they effected your work?

Anthony: Fantasia 1940 was very influential, because of the mix of art-styles and music. This is the movie that hooked me to Disney and the character of Mickey, who was confronted with a power he didn’t know how to wield and kind of had to learn as he went. Pinocchio was also a huge reference because of the story of a child who has to make his way in the world through courage and willpower.

Me: If you had to pick your three favorite designs in this game, anything from characters to creatures to areas to items, which three would you pick and why?

Anthony: 1. Billy, the main character is awesome, especially the diver helmet! *laughs*
2. Billy’s Punching Rod, because it’s an item with a mind of its own… You’ll see…
3. The Leviathan, it’s a mythical creature that everyone can understand the scale of and to see little Billy go toe to toe with him will be interesting!

Me: Your characters have an anime-flair to them. What are some of your favorite anime that have informed the style we see in Steamboat Billy?

Anthony: The obvious inspirations would be Pokémon, but the latest inspiration would be Aggretsuko because of the animation style and the cute touch of Sanrio characters.

Me: Christopher, what inspirational words do you have for fellow CEOs and technical directors in the video game industry?

Christopher: The industry in the past few years is changing rapidly, competition has never been fiercer than it is today. So make sure you have an idea that can stand out against the rest of what’s out there and you should be fine. Also remember that game development is a mix of Art, Design and Programming. Make sure those three things are covered by experts in your company and play to the strengths of those experts. If one of those are lacking then you will have trouble being successful in this industry.

Me: And Anthony, what inspirational words do you have for fellow art directors and character designers in the video game industry?

Anthony: Creating anything is a tough task these days because there’s never been more competition in the industry. But this is also a good thing, because it means that people are creating more and more universes we can all delve into and enjoy. It really all comes down to hard work, being different, creating your own community and giving people something that stimulates their imagination! Good luck out there!

Me: What is the number one reason you think people should pledge your Kickstarter project?

Christopher: Steamboat Billy is really a beautifully weird and awesome idea that we think can work if given the chance. Pledging to our Kickstarter gives us that chance and allows us to make the game a priority instead of just a project we’d make in between contract jobs. Plus, on top of the rebate for the game, we are giving away a ton of exclusive goodies to our Kickstarter backers so there’s also that incentive! 😀

Anthony: If you want to relive that moment when you came back from school and played Pokémon on GameBoy or The Legend of Zelda on the GameCube, then this is your opportunity to help us make that game for you and for the younger generation coming home from school!

Me: Thank you for taking the time to answer my questions, and for putting a creative spin on some video game classics! If you’ve been reading and are interested in checking out Steamboat Billy, take a look at the official Kickstarter page here.