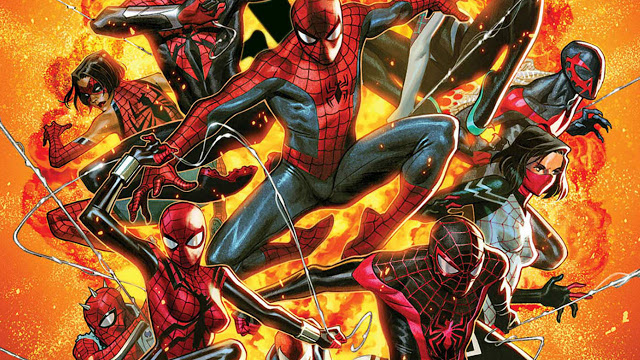 Marvel is at it again! Today they released one of their well known cryptic teasers. Last month they teased us with an ominous black images with the words SPIDERGEDDON IS NIGH. The in the August 2018 Solicitations we got our first look at the Edge of Spider-Geddon with the solicitations of Edge of Spider-Geddon #1 & #2. Now we have our first image for the event as well as who the creative team is writer Christos Gage and artist Jorge Molina. 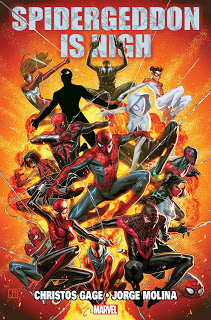 The interesting thing about the promo to me are the characters we see. Yes we get to see the usual suspects like Spider-Man (Peter), Spider-Man (Miles), Spider-Gwen, Silk, Spider-Man 2099, Scarlet Spider (Ben), Spider-Man Noir, Spinnerette, Spider-Punk, and Spider-Girl (Ashley Barton). But we also have some surprises here like the mysterious blacked out Spider-Man who apparently has fire powers, could he be related to Johnny Storm? Ultimate Spider-Woman, Jessica Drew; but didn’t the Ultimate Universe die? Superior Spider-Man returns? Then we have who appears to be Mayday Parker as Spider-Girl, but last we saw her she had taken on her father’s costume and going by Spider-Woman, but now she is in her old costume. Not much in the image but Spider-People, but a lot of speculation to have!

What do you think this means? Let us know in the comments below or @ComicFrontline on Twitter  and use the hashtag #SpiderGeddon with your thoughts on this teaser.

For more information about SPIDER-GEDDON, be sure to stay tuned to Comic Frontline and tune into Frontline LIVE 204 Tuesday night at 10:00 PM ET to hear the Frontline 6 discuss this and more!