Are you ready for the apocalypse? Lacey and her giant radiated cat After certainly are! I’m talking with the creative team of Afterglow, a post-apocalyptic adventure graphic novel for cat lovers.

Afterglow is a 70 page graphic novel taking place 100 years after The Glowing, an event that devastated 80% of the population. Survivors were not left the same. The water is radioactive, animals have mutated, and the world has become filled with glowing color.
Now one of the survivors, an outsider named Lacey, has found her late mother’s journal, which speaks of another impending apocalyptic event. So Lacey and her giant radioactive cat, After, go out to share this knowledge with the world and try to prepare for the upcoming disaster.

The series is being published by Space Between Entertainment, the publishers of Destiny, NY, Clonsters, Modern Dread and Prison Witch. The writer of Afterglow is Pat Shawn, writer/creator of such titles as Destiny, NY, Breathless and writer of several Zenescope series like Robyn Hood and Grimm Fairy Tales. The artist for Afterglow is K. Lynn Smith, who is the artist/writer/creator of the extremely successfully Plume: omnibus (which raised over $60,000 on Kickstarter).

The Kickstarter has hit its $13,000 goal but it’s still taking pledges until it ends on June 22, 2018 at 8:00 PM EDT. They’ve even hit a couple stretch goals, including a page-by-page audio commentary of Afterglow, an annotated script of Afterglow and a Cat Lady sticker! For rewards you can get digital ($10) and physical ($20) copies of the book as well as a signed bookplate ($25), a Kickstarter exclusive variant ($35) and buttons ($35) among other things. If you’re interested in these rewards or seeing more, check out the official Afterglow Kickstarter page here.

To learn more about the world of Afterglow, I interviewed the creative team below!

Me: What is the relationship like between Lacey and After?

Pat: Lacey is an extroverted loner who is only a loner because she freaks most people out. After is her lovable but incredibly needy giant, radioactive cat. Basically, they’re soulmates. The core of Afterglow is exploring the unique bond between human and pet and disguise it as this post-apocalyptic fantasy.

Me: If you were in a version of our world after the Glowing happened, what would your typical day be like?

Pat: I don’t want to give too much away, but our way of life that we know now—constant connection between individuals worlds away from each other, constant stimulation—that’s all gone. The survivors have broken off into villages that are somewhat self-sufficient and largely operate independent of each other. In Lacey’s village, there are a lot of rules and there is a lot of fear. They live in fear that something like the Glowing will happen again and they see Lacey, who carries around a book of her late mother’s indecipherable prophecies, as an insane fear-monger. It’s tense! 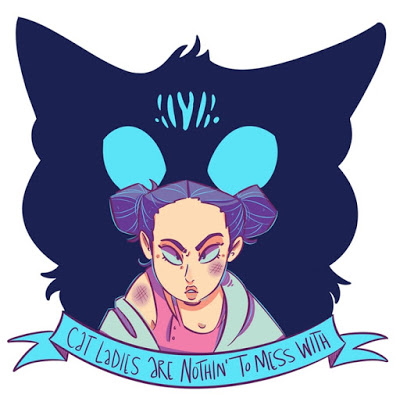 Me: If your cat became giant and radioactive, what do you think they would do?

Pat: Whine for food even louder. A big part of the humor with After is that he’s pretty much still a regular cat and behaves as such… with some exceptions, including poop that glows bright enough to light up a town at night. He doesn’t quite fit in with Lacey’s strict village.

Me: Will there be any sequel/prequel stories to Afterglow further exploring this world you’ve created?

Pat: I’m not ruling anything out, but I will say that Afterglow tells a complete story. 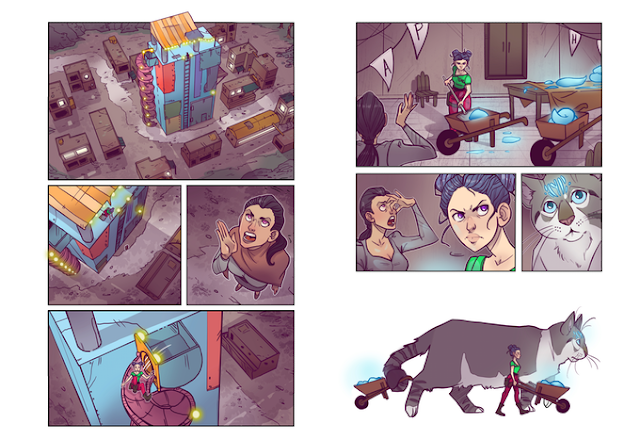 Me: You’re offering some of your previous books as rewards as well. What about these stories would appeal to fans of Afterglow in particular?

Pat: If the dawn of Netflix and binge-TV has taught us anything, it’s that people love character-driven stories, and that has always been my focus.

Destiny, NY is about a former magical girl trying to find her purpose in life as she falls in love with the last surviving daughter of a mystical crime family. It’s a magical story about everything but the magic.

Clonsters is a fantasy adventure created by my wife Amy Shand that we wrote together, which introduces a world of whimsical creatures such as Earth Nuggets, Pocket Rocks, Splats, and more. It’s like Adventure Time meets Aaahh! Real Monsters, merging what we love about modern cartoon storytelling with what works in the past.

Prison Witch is also a collaboration between me and Amy, and it’s a story about the magic women do behind bars. In each of these stories, even though some are for adults and some are for all-ages, we’re keeping the focus on our characters that everyone can understand, empathize with, and follow for years to come. 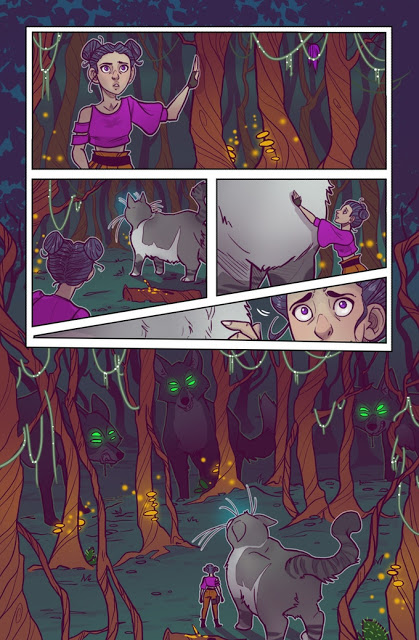 Me: How did you find Space Between Entertainment and decide they were the perfect publisher for Afterglow?

Pat: I run Space Between Entertainment! I created the company with Shannon Lee (editor) and my wife Amy Shand after successfully Kickstarting our first graphic novel, Destiny, NY Volume One. I wanted to create an entertainment collective so we could produce the kind of content we wanted to read or experience. We’re doing graphic novels, vlogs, and podcasts to start—but my idea is for Space Between to be a limitless force of creation.

Me: Would you be able to share any tidbits about more in-depth future plans for the company?

Pat: We’ve run a few Kickstarters that we’re working on right now. We’re releasing our horror anthology Modern Dread this summer, the second volume of Destiny, NY this fall, and our new magical thriller Prison Witch in the winter along with Afterglow.

Our flagship title is Destiny, NY, which is our ongoing series of graphic novels about a former magical girl and her romance with the last surviving daughter of a mystical crime family. I’m currently planning our third volume, which will launch on Kickstarter early in 2019, as well as a spinoff or two we have coming up. 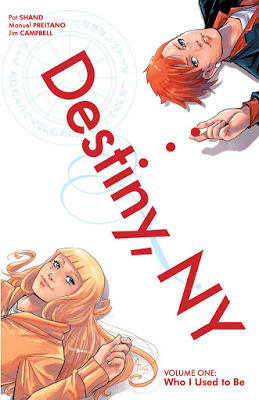 Me: What is the number one reason why you think people should pledge money to this Kickstarter project?

Pat: Honestly, K. Lynn Smith’s art. I’ve been hoping to work with her ever since seeing her beautiful artwork on Plume years back, and it’s finally here. I created Afterglow with her art in mind, so I’m very much leaning into what I love about her work. I think it’s going to blow minds.

Make it happen yourself. Everyone you think is your competition is not. The only one holding you back is yourself, because in the end, most people give up. Whether they give up before they start a career, during, or after… most people give up. If you don’t give up, as simple as it sounds, and pair that attitude with actual talent? You’re Teflon.

Me: How did you become part of the Afterglow project and what attracted you to the concept?

Lynn: When Pat said the phrase “giant mutant cat” in the pitch, I was immediately hooked. And I knew, from Pat’s previous work, this project was going to be amazing. Plus, Lacey is an incredible leading lady. She’s smart, tough and completely loyal to her large fluff ball. I was in.

Me: What was your favorite page/panel of Afterglow to draw and why?

Lynn: I think my favorite and proudest piece done so far is Afterglow’s pastel cover. It was when the characters officially clicked into place, right after the concept art. 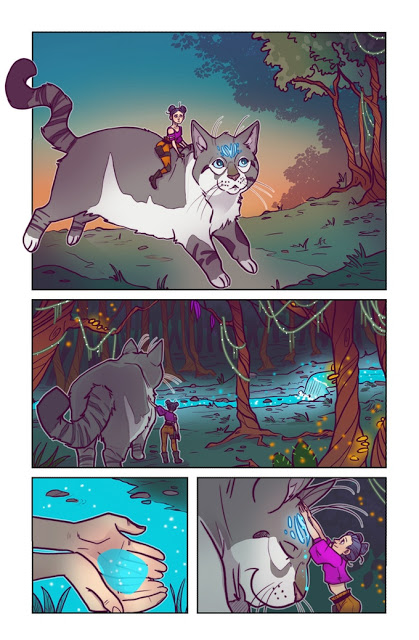 Me: If you were in a version of our world after The Glowing happened, what would your typical day be like?

Lynn: I would probably be holed up somewhere, creating art with some radioactive goo and sipping on their version of coffee. God, I hope they have coffee. Pat? Do they have coffee?!

Me: What is the number one reason why you think people should pledge money to this Kickstarter project?

Lynn: Pat Shand’s beautiful world and amazing characters need to be out there, in your hands. Seriously. You’re going to love it. 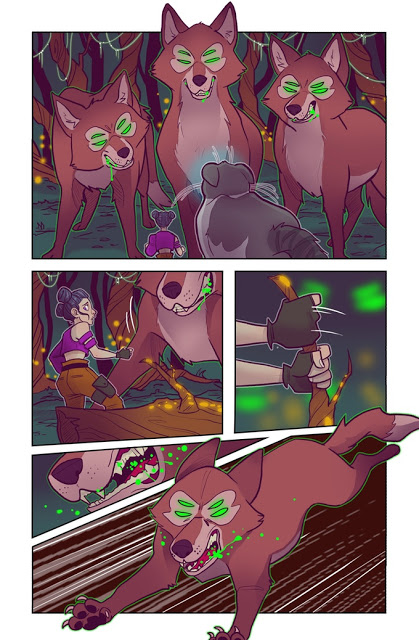 Lynn: I know, it sounds cliché, but keep at it. Draw every day, write every day, hone your craft. And remember that failure is not the end of it. It’s just an opportunity to try again. Keep. At. It.

Me: Thank you for adding more material to us cat lovers’ wish lists! Readers, if you’re interested in a giant cat in a glowing world, check out the Afterglow Kickstarter. 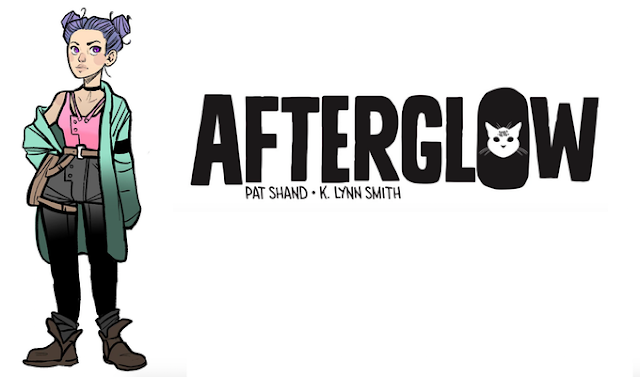 Steamboat Billy: The Curse of the Leviathan