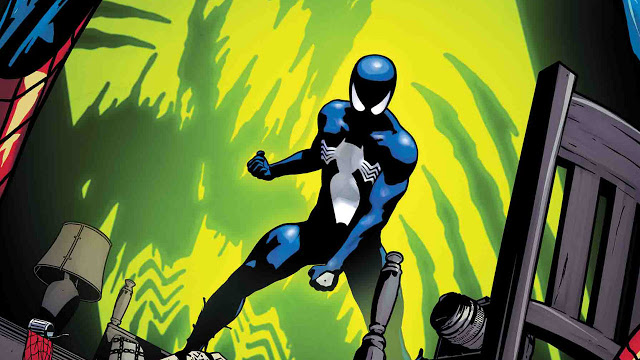 What goes bump in the night? The answer might surprise you…When Spider-Man made his return from an alien world some years ago, he didn’t just come back with new adventures under his belt – he also returned with a special new costume! But Peter soon learned that the costume was more than just a suit…it was a living alien symbiote, and one who had set its sights on bonding to him permanently. Despite rejecting the suit that would eventually become Venom, Peter had no idea that late at night, the symbiote had its own ideas…

This September, prepare for an all-new nightmare fairytale as Hugo nominee Saladin Ahmed, fresh off his Eisner nominated book Black Bolt, takes his acclaimed storytelling to the Spider-verse. Along with superstar artist Garry Brown (Iron Patriot), the two creators weave a tale of mystery, tension and drama as they answer the question everyone wants to know: just what was the symbiote doing with Peter during those secretive nighttime excursions?

“AMAZING SPIDER-MAN ANNUAL is an untold street-level story of the brief bond that existed between Pete and the alien symbiote that would eventually become Venom. This is my tribute to the Spider-Man I grew up reading in the early 1980s — the messed up and confused Peter Parker who came back from an alien world with a new costume and new problems as Gang Wars tore through the streets of Manhattan. That era of Marvel storytelling had a profound influence on me, and it’s an absolute thrill to come back to it by writing Marvel’s most iconic hero. Walking this line between nostalgia and a modern story requires a really skilled artist, and Garry has knocked it out of the park on that front. His work has all the pulpy excitement of the Bronze Age without wallowing in the past. Spider-fans are going to love this book!”

“Saladin and Garry are absolutely tapping into the heart of the fan-favorite alien costume storyline while bringing something new to bear. Like a lot of people, I read and re-read those original stories and those bits of Peter completely drained, sleeping through whole days after the symbiote took him through mysterious unconscious adventures, always felt like a story waiting to be told. So it’s really a dream project for the team, even if it’s a nightmare for Peter Parker.”

Don’t miss the book that every Spider-fan will be talking about – AMAZING SPIDER-MAN ANNUAL #1, in comic shops this September!