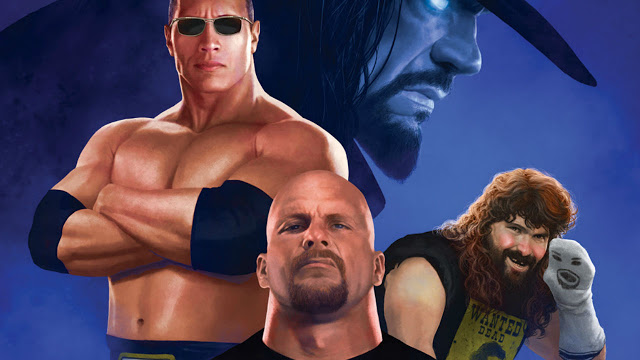 BOOM! Studios today unveiled a first look at WWE: ATTITUDE ERA #1, an oversized special one shot available in August 2018 focusing on one of the most important eras in WWE history. Join Ryan Ferrier (Rocko’s Modern Life), Andy Belanger (Southern Cross), Aaron Gillespie (Green Lanterns), Julian May (WWE), Michel Mulipola (WWE: WrestleMania), Hyeonjin Kim (Sisters of Sorrow) and Kendall Goode (The Pride) for stories delving into the history of “Stone Cold” Steve Austin, the rivalry between the Brothers of Destruction, Undertaker and Kane, and DX’s infamous invasion of a  competitor “down South”…

“ARE YOU READY? If that battle cry makes you smile, then you’re going to love the stories in this anthology spotlighting the biggest stars and stories of the Attitude Era.”

WWE: ATTITUDE ERA #1 features a main cover by Rahzzah (Luke Cage), with a variant cover by Will Robson (X-Men: Blue) with colors by Jeremy Lawson.

Print copies of WWE: ATTITUDE ERA #1 will be available for sale on August 1st, 2018 at local comic book shops or at the BOOM! Studios webstore. Digital copies can be purchased from content providers, including comiXology, iBooks, Google Play, and the BOOM! Studios app.

Stay tuned to Comic Frontline for continuing news on WWE and more from BOOM! Studios.