It’s The Good, the Bad and the Ugly meets Planet of the Apes! Enjoy the sci-fi western, The Chimp With The Brown Hat, starring… a talking chimp that wears a brown hat! I speak with writer Nathaniel Gold about his creation.

The first volume of The Chimp With The Brown Hat collects the first four issues of the series, with over 100 pages of content. This sci-fi western is written and illustrated by Nathaniel Gold. It also includes an introduction by hall of fame science-fiction artist and writer Vincent DiFate.

The Chimp With The Brown Hat takes place in 1880 and centers around a chimp that wakes in the desert with amnesia and a robot hand. He journeys across the Old West to try and discover who he is and what his connection is to the space-worms attacking villages.

Enjoy my in-depth talk with Nathaniel Gold about his spaghetti western with a mix of banana.

Me: What inspired you to combine The Good, the Bad and the Ugly with Planet of the Apes through this comic?

Gold: I had always been inspired by chimpanzees. I have done a lot of charity work with chimpanzee sanctuaries that are home to chimps that have been rescued from bio-medical research. I have written a few books that are about a chimpanzee that was part of the space program. But the spaghetti western has entered my life in a big way over the past two years and I really wanted to tell a western story the only way I knew how… with a chimp.

Me: What is the chimp’s personality and why do you think readers will enjoy following his journey in particular?

Gold: He is a lone wanderer with no idea of who he is or where he came from and the audience goes on the journey with him to discover the truth. 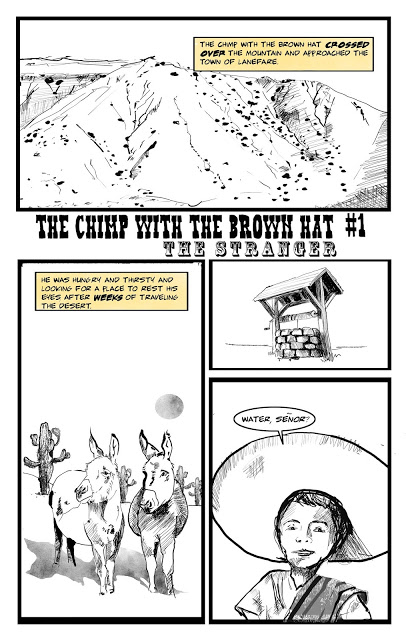 Me: What can you tell us about the conflicts he will be facing in this story?

Gold: He is facing classic Old West Bandits and giant space-worms, all while trying to figure out the mystery of who he is and where he came from.

Me: What is your favorite Spaghetti Western and how would you say it influenced The Chimp With The Brown Hat?

Gold: Fist Full of Dollars, Day of Anger, and The Good, the Bad and the Ugly. These films along with many others inspire me with the drama, feel, look and swagger of them, from the gritty characters to the dirt that you can almost smell in the landscape.

Me: If you lived in this time period, what Western archetype do you think you’d fall into?

Gold: I would like to say Gunslinger but probably more of a bar tender lol. 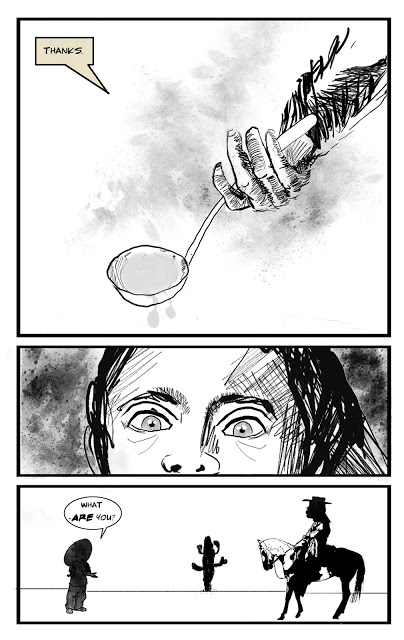 Me: You mention an introduction by hall of fame science fiction artist and writer, Vincent DiFate. How did he come on board to the project?

Gold: Vincent was my professor in Grad School and became a longtime friend and mentor. I asked him and he agreed.

Me: What is the number one reason why people should back your Kickstarter?

Gold: This is a unique comic and a story for all ages. This is an amazing time for independent creators and for those that enjoy independent content and Kickstarter gives us all a platform to share and enjoy. 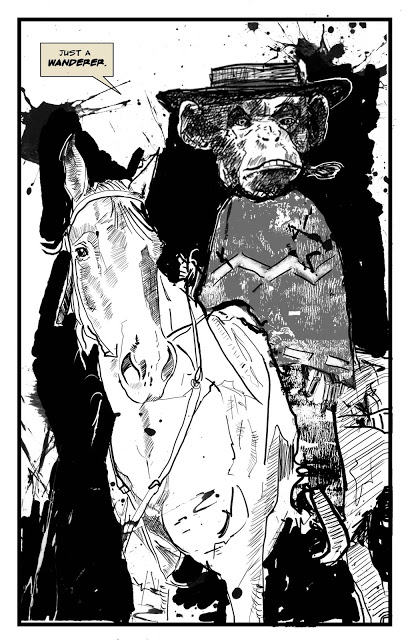 Gold: Just do it. Might sound simple but I waited 10 years to do it and because I was too scared to. But when I finally made it and put it out there everything changed. It became real. There are people out there that want what you offer; just put your art into the world.

Me: Thank you for taking the time to tell us about this bananas adventure! If you’re reading this and interested in checking out the first ever banana western, see the Kickstarter for The Chimp With the BrownHat Vol #1.