Ever wanted to watch The Bachelor, but with superheroes and something (even more) sinister brewing behind the scenes? You’ll get that and more with the Kickstarter for The S Factor graphic novel. I talk with creator/writer Samuel George London about his foray into the superhero dating game!

Inspired by The Bachelor and advertised as perfect for fans of Jupiter’s Legacy and Batman: A Death in the Family, The S Factor is a 92 page one-shot superhero detective comic. The story focuses on former sidekick Miles aka Greyfox, who’s tired of being underappreciated and second in command to London’s premier superhero, Darkfox. Now rebranded as The Symbol, Miles stars on the reality TV show The S Factor to fix up his image… except there may be something lurking away from the cameras. And Darkfox thinks it may have something to do with the public’s growing distrust of superheroes!

The S Factor was created and written by Samuel George London after his friend convinced him to watch The Bachelor… and he enjoyed it. He works with illustrator Chris Panda on the book. Chris has worked on IDW Publishing’s Micronauts and ROM as well as his own art books, Kicking Ass & Wearing Heels.

I talked in-depth with Samuel George London about his Bachelor, Jupiter’s Legacy, and Batman: A Death in the Family mash-up!

Me: You were inspired to combine a dating reality TV show with superheroes after watching The Bachelor with you friend. What did you enjoy about that reality TV show that made you so inspired?

Samuel George London: It was the most recent season of The Bachelor, which was quite a controversial one, as the suitor chose someone but then after a couple of weeks he broke up with her and got back with the “runner-up”. I think this controversy got my storytelling brain cogs turning and I just started to imagine all of the contestants as superheroes and the story started to form in my head from there.

Me: You mention The S Factor will especially be fun for fans of Jupiter’s Legacy and Batman: A Death in the Family. What is it about these two titles that makes you relate them to your graphic novel?

London: The relation to Jupiter’s Legacy is the clash between the older generation and newer generation superheroes wanting to go about things in different ways. The S Factor has this in the relationship between Greyfox and Darkfox. For Batman: A Death in the Family it’s also about the relationship between our leader superhero (Darkfox) and sidekick superhero (Greyfox), but it’s slightly reversed in that Greyfox feels underappreciated and leaves Darkfox to become his own superhero, The Symbol. At the same time though, and I don’t want to give too much away, but it’s also about how high the stakes are with the supervillain behind it all. 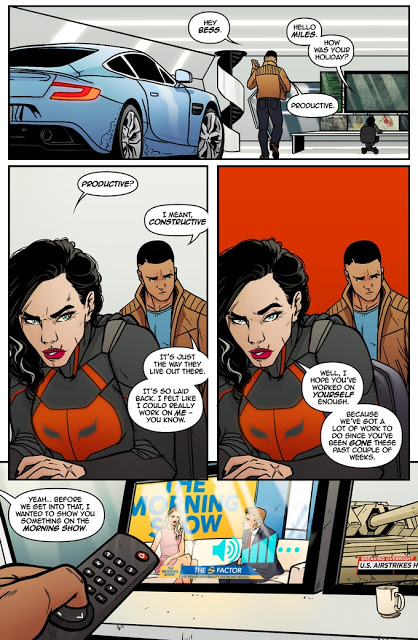 Me: How would you describe Greyfox’s (now The Symbol’s) personality and his relationship with Darkfox?

London: Greyfox’s personality is good-natured but hot-headed at the same time. Meaning that he intends to do the right thing but needs some guidance on how to implement that ethically. When we start this story Greyfox and Darkfox have been a superhero duo for a decade, which started when Greyfox was only 18. And so, Darkfox is like a mother to him. However, as with most mother and son relationships, the son is always going to rebel at some point. And speaking from personal experience, it’s usually because the mother is too caring and the son wants to walk his own path.

Me: If you had to be a sidekick to one superhero, who would you pick and why?

London: Hmmm…I really had to think about this one, but for me it’d be Doctor Strange. He’s not my favourite superhero, but I think he’d be a good teacher. Plus I really dig magic!

Me: Could you give each notable contestant in The S Factor reality TV show a one sentence description? 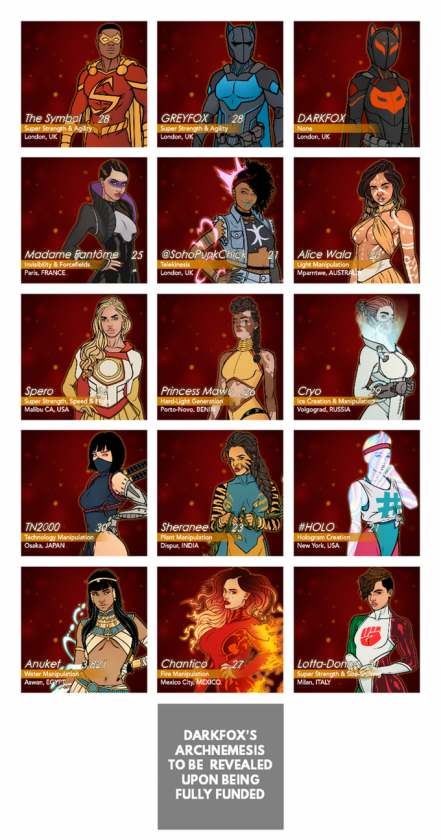 Madame Fantôme – She grew up in Paris without any family or friends, and now she seeks to protect and serve those who aren’t fortunate enough to have powers.

@SohoPunkChick – One of the biggest YouTube stars in the UK, @SohoPunkChick cycles around central London making sure that the streets are safe.

Alice Wala – She won’t talk about it in detail but Alice came to possess her powers after her “walkabout” or temporary mobility.

Princess Mawu – Heiress to the Kingdom of Dahomey, Princess Mawu was given her powers through an extraterrestrial family heirloom that gives a worthy possessor the ability to manipulate hard-light.

Cryo – She gained her powers after a nuclear power plant accident in northern Russia, and was recruited as an agent of the Russian government.

TN2000 – After breaking into a research facility, TN2000, was exposed to a technological virus.

Sheranee – Growing up in the jungles of northern India, she was discovered by locals and is worshiped as a goddess.

#HOLO – The biggest YouTube star in the world, #HOLO has holographic powers that enable her to visually change the immediate environment to whatever she wants.

Anuket – Awoken in 2015 after a 3,000 year slumber, Anuket is literally the ancient Egyptian goddess of water.

Chantico – Her fire powers have been handed down from generation to generation for 700 years.

Lotta-Donna – Originally an MMA fighter, she has super strength and size-shifting powers that enable her to grow up to 12 metres tall; but the taller she is, the less time she can stay at that height. 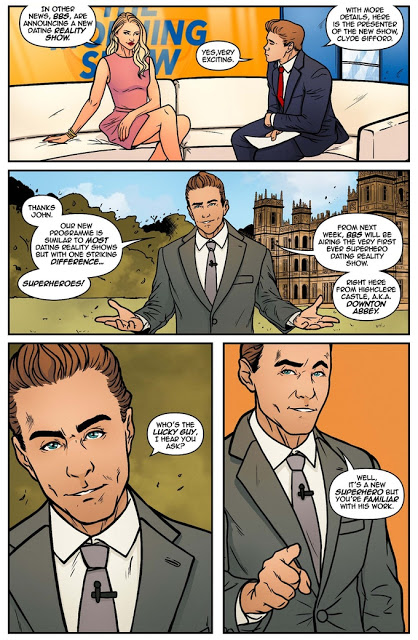 Me: Say you were the star of the reality TV show The S Factor, who would you want to be the super-contestants vying for your hand and why?

London: If I were the suitor of The S Factor, I think my final 3 would be @SohoPunkChick, Lotta-Donna and Alice Wala. For @SohoPunkChick, she’s a London-girl, so she doesn’t take crap from anyone, which I find attractive in a woman. For Lotta-Donna, she’s an ex-MMA fighter, which is hot, as well as the shaving the side of the head thing. And finally, for Alice Wala, she’s very otherworldly and incredibly angel-like, which just makes me think that she would be an amazing partner for life.

Me: Chris Panda is the artist on The S Factor, and you mention on your Kickstarter page that his superhero art really captured your attention in his Kicking Ass & Wearing Heels books. What elements of these books made you realize he was perfect for your comic?

London: Chris is a fantastically talented artist, and his books stood out because of the large amount of variety that he was able to come up with. Each of those books has a ton of different outfits for female superheroes, which takes him ages to research and develop. This meant that he has a strong foundation in female fashion and would easily be able to transfer this into The S Factor. 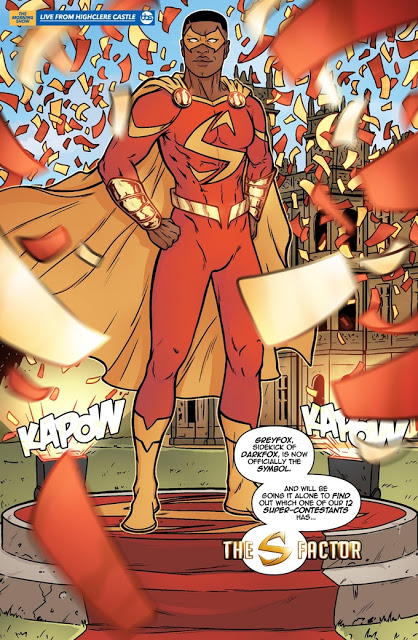 Me: What is the number one reason why you think people should pledge money to your project?

London: The number one reason is because this is a story for the modern world that we live in. When I was researching for The S Factor, I was surprised that no one had really done it, but I think it’s about time that someone brought this into the world of superheroes. Because I think that if we did actually live in a world with superheroes, it would happen.

London: Read a variety of subjects, fiction and non-fiction, and try to bring those elements that have not been explored yet into the world of comics for everyone to enjoy.

Me: Thanks for sharing your super powered dating expertise! If you’re reading this and interested in The Bachelor meets Batman, check out The S Factor Kickstarter here. 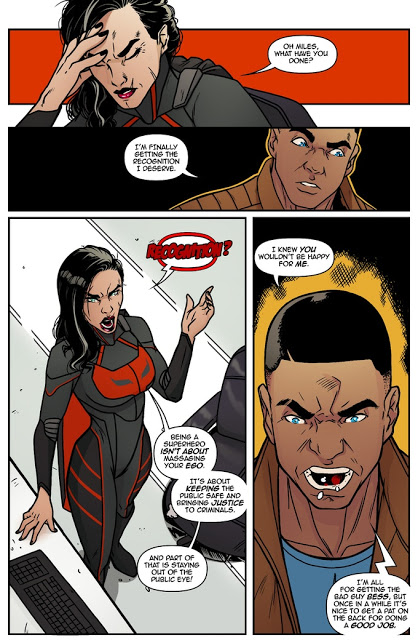 The Chimp With The Brown Hat Vol #1: The First Banana Western