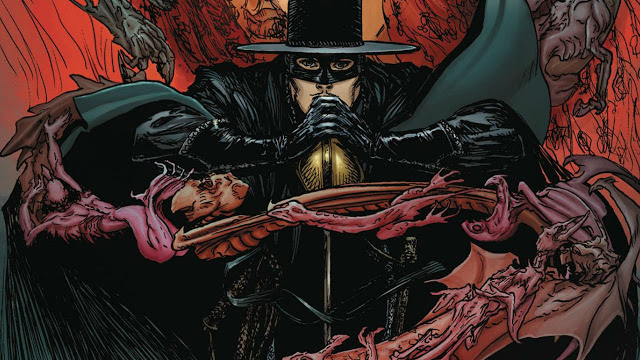 “Z” Marks the Spot as Zorro Celebrates 100 years of Adventure!

While other icons and comic book characters have reached milestones marking their 40th, 50th, even 75th anniversary, there’s only one who can claim a century of swashbuckling sensation. The man in black, the “fox,” sword-master supreme and hero to millions of fans the world over, the masked adventurer Zorro turns 100 in 2019. But don’t worry, the soon-to-be centenarian has plenty of tales left to be told, and American Mythology Comics will be leading the charge with a new series of stories to help celebrate the ground-breaking event.

In the history of masked heroes, Zorro has long been recognized as one of the pioneers of the dual identity genre, if not the spark itself which led to many of the hero’s more contemporary caped counterparts. Don Diego de la Vega has been battling whatever form of evil has dared cross his path for the last 100 years, using only his wit, his sword, and his sense of righteousness. The character is the embodiment of standing up for what is right and the protection of those who need it.

But with a character carrying as vast of a history as Zorro, between novels, comics, movies, television, and more, how do you find a fresh take to appeal to fans both new and old? You pull out all the stops and bring your own legendary creators on board. That’s exactly what American Mythology did with comic veteran artist Michael Kaluta, who’ll be providing cover illustrations for their upcoming Zorro: Sacrilege storyline. Fans of the iconic artist can expect the same amazing artwork he’s best known for with his new contributions to the series.

American Mythology released Zorro: Swords of Hell earlier this year, which was well-received by fans of the masked hero. The series, written by pulp fiction pro David Avallone, was the first story to place Zorro in the path of the supernatural by way of a team of demonic horsemen, looking to exact their own brand of vengeance. It was the perfect kick-off for the publisher, leading into the year-long grand celebration of the character’s centennial. While Swords of Hell whet our appetites for more Zorro adventures into the unknown, Zorro: Sacrilege will showcase the hero battling an even darker evil trapped in a religious mission far from his home. 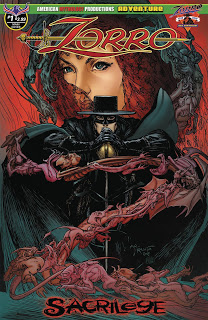 “One of our goals with the new stories is to introduce Zorro to an all-new readership. But to move ahead, we first have to look at the past. Now, Zorro was one of the earliest American literary heroes, created during the time when westerns were enjoying immense popularity, but with each passing decade, we’re farther and farther away from the age when Western themes, and the mystique of the ‘wild west,’ were still within the living memory of many readers. A century later, modern readers are a bit reluctant to embrace Western themes, so basically, we’re appealing to more modern tastes by skewing our tales toward horror, and the fun aside is that we’re introducing the ‘Old West,’ its settings and themes, to readers who have never seen it. And that gives our Zorro stories a bold and fresh take, while also being nostalgic.”

Interior illustrations for the new series will be handled by artist Mauricio Melo, who’s best known for his work on Stargate Atlantis and Stargate SG-1 comics. Covers will be drawn by former series interior artist, Roy Allan Martinez, current interior artist Melo, and Kaluta, who will be handling the issue’s main cover.

“This one is going to be horrifying. Something darker and more ancient than Christianity (is) preying upon the people of San Leticia. If you’re a fan of Dario Argento’s films, the movie ‘*REC’ (or ‘Quarantine’), or were totally creeped-out by John Carpenter’s ‘Prince of Darkness,’ then you’re going to love Sacrilege.”

Zorro, “The Fox,” was created in 1919 by the writer Johnston McCulley for his serialized novel The Curse of Capistrano. This story was the first of 65 immensely popular prose tales in which the romantic hero fought injustice in Spanish California’s Pueblo de Los Angeles. In the century since, Zorro has been an omnipresent figure in pop culture, the star of novels, comic books, cartoons, television, and feature films.

“For decades we have utilized a fresh, innovative approach with top talent to enhance the Zorro’s universe of characters, the Zorro brand & franchise. Our relationship with American Mythology is yet another example of our commitment to our fans and Zorro!”

Zorro: Sacrilege #1 will be advance solicited in Diamond Comic Distributors’ Nov 2018 Previews catalog, the premier source of merchandise for the comic book specialty market, and slated for release in February of 2019. Comic book fans are encouraged to reserve copies with their local comic book retailers.

Let us know in the comments what you think of this Archie Comics Announcement and don’t forget to follow us on Twitter for the latest Previews, Reviews, News and Interviews!
All images are courtesy of American Mythology