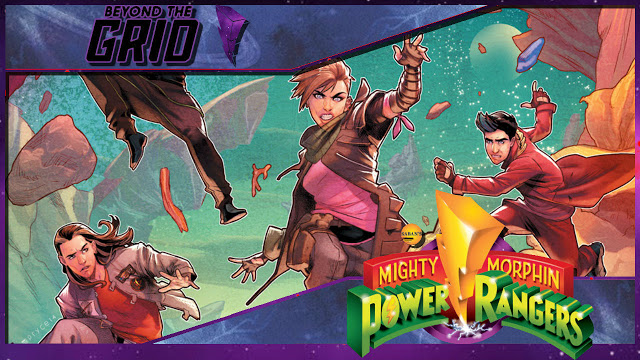 BOOM!  Studios have shared with Comic Frontline the MORPHENOMENAL preview of  MIGHTY MORPHIN POWER RANGERS #33! The next issue of BEYOND THE GRID! Arriving in comics shops worldwide on November 28th, this issue continues to pick up the pieces of the first comic book event in the twenty-five-year history of the global franchise POWER RANGERS: SHATTERED GRID as writer Marguerite Bennett and artist Simone Di Meo deliver a story that every Power Rangers fan must read! IT’S PREVIEW TIME!

BEYOND THE GRID continues as an all-star team of Power Rangers struggle to survive a hostile new environment with diminishing powers and no allies.  Meanwhile, Andros (Red Space Ranger) comes to terms with the lengths that he will go, and the lines he will cross, to reunite with his sister, Karone.

Copies of Mighty Morphin Power Rangers #33 will be available for sale on November 28, 2018, at local comic book shops or at the BOOM! Studios webstore. Digital copies can be purchased from content providers like comiXology, iBooks, Google Play, and the BOOM! Studios app.

Currently, Power Rangers is celebrating 25 continuous years on the air, making it one of the longest-running kids’ live-action series in television history with nearly 900 episodes aired to date. Created by Haim Saban and launched in 1993 with Mighty Morphin Power Rangers, the franchise celebrates its milestone anniversary year with the 25th season, Power Rangers Super Ninja Steel currently airing on Saturdays at 12 p.m. (ET/PT) on Nickelodeon in the U.S.
Related Links: