Skip to content
By: Nicole D’Andria
The super
team Argo 5 has returned! Having previously talked to the creative team on “Kickstart the Week(end)”, these superheroes
are back at it again, taking on aliens, demons, mythological deities and,
scariest of all, bad dates.

Argo 5 is led by the super-powered Gladiatra. Members
include her boyfriend Shazrath (the Maltese god of strength), Blue Dynamo (powered by the Blue Star), Chain Reaction (a martial arts master),
and Kasira (a half-human, half-genie). They’re funded by billionaire Denny Dennis,
who also gets the team their very own space station.

This second
collection includes issues #6-11 of Argo 5,
which focus on the origin of Blue Dynamo and Gladiatra attempting to find Megamax,
the world’s greatest megahero… and also her father.
Created
and written by Dan Sehn, each issue of Argo
5 features different artists, including Alex Garcia, Rafael Dantas Gomes,
Rafael Lanhellas, Alan Faria, Carlos Henry, Tazio Bettin, Mike Gallagher, Scott
“Shade” Jones, Antonio Brandao. Ben Dunn, Greg Nichols, and TG
Sangalang. Colorists include Giuseppe Pica, Alan Faria, Erika Ferreire and
Miguel Marques.
The
Kickstarter has already raised double its $1,000 goal and will continue to run
until December 20, 2018 at 3:36 PM EST.
Rewards include digital ($10) and physical ($30) copies of Argo 5 Volume 2 as well as print sets
from superstar artists ($50) and having your character guest star in Argo 5 ($100)! See more rewards or
pledge to Argo 5 Volume 2 here.
Enjoy in-depth interviews with writer Dan Sehn as well as artists Rafael Dantas (Argo #6) and Alex Garcia (Argo #11).
Me: This volume includes an issue that focuses on
the origin of Blue Dynamo. What can you tell us about his character and why you
chose to focus on him specifically here?
Sehn: I have been making my way through the origins
of all the characters. Issue 2 had an abbreviated origin of the half-genie
Kasira. Issue 6 contained the origin of Blue Dynamo. Issue 19 has Shazrath’s
mythological origin and issue 26 contained the team leader Gladiatra’s origin
(along with her brother Ultro of Team North America). The upcoming issue 30
will finalize the set with the team’s resident Mexican martial arts master,
Chain Reaction’s origin.
Me: Since Gladiatra is searching for her father,
the world’s greatest megahero, what can you tell us about him and his
significance in Argo 5?
Sehn: As seen in Argo
5 Volume 1, which is offered again in this Kickstarter, the team is funded
by Denny Dennis who fought in the Korean War with Megamax and he recruited
Megamax’s daughter Gladiatra to lead Argo 5. 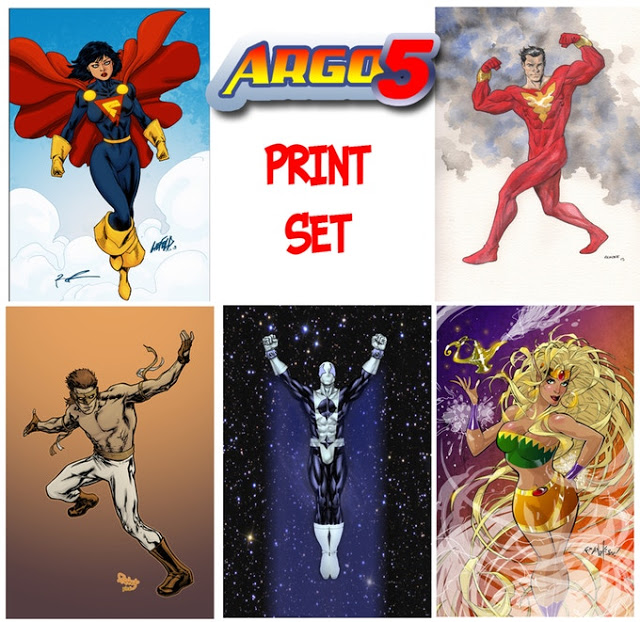 Me: If you could pick one super powered character
in all of comics to be your father, who would you pick and why?
Sehn: Superman seems to have the best moral compass
in comics, so I think he’s a good choice.

Me: What is the number one reason why people should
back this Kickstarter?
Sehn: I love indie comics for the unique voices and
approaches some are able to deliver. I think that along with the combination of
quality in story and art make Argo 5
one of the best choices in the indie superhero market.
Me: What can you tell us about the future of Argo
5?
Sehn: Issue 28 and 29 is a two part story that
heavily features on the soap opera element that I believe is part of what sets Argo 5 as different from many others in
the market. As I mentioned, we’ll get Chain Reaction’s origin in issue 30 and
several more issues are completed and ready for lettering, so there is much to
look forward to.