Cosmic Ghost Rider blazed into comic books in THANOS #13, quickly becoming one of the hottest characters of 2017 – and now, the fan-favorite scene-stealer from co-creator Donny Cates is about to destroy some Marvel history! 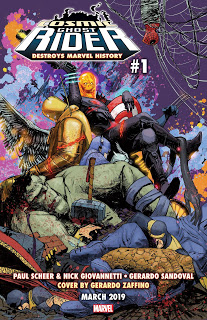 This spring, comedian and The League star Paul Scheer re-teams with Far Cry writer Nick Giovannetti (Deadpool Bi-Annual, Guardians Team-Up) for COSMIC GHOST RIDER DESTROYS MARVEL HISTORY #1: an all-new limited series, where the Cosmic Ghost Rider is stuck in the past. So what’s the Cosmic Guardian of Justice going to do? Rewrite the origins of the Marvel Universe, of course!

Who really gave the Fantastic Four their powers? Who brought The Amazing Spider-Man back after Spider-Man No More? Who found Captain America on ice before the Avengers did? Who saved Jean Grey from the Dark Phoenix Saga?