MARVEL’S SPIDER-MAN Swings Into The Pages of Marvel Comics!

Marvel’s Spider-Man: City Of War To Debut This March!

The fan-favorite and critically acclaimed Marvel’s Spider-Man has taken the world by storm – and now the video game’s web-slinger is leaping into the pages of Marvel comics! Starting this March, all your favorite Spidey characters are presented in new and surprising scenarios as Peter Parker’s civilian and superhuman worlds collide in the game’s original, action-packed story! 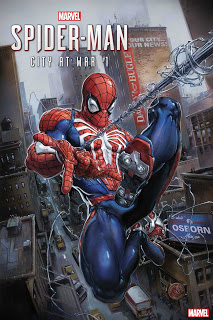 After protecting his beloved New York City for eight years, Spidey finally has the opportunity to put Wilson Fisk behind bars for good. But removing the Kingpin from the mean streets of Manhattan has its own repercussions…as a new threat, the mysterious crime lord called Mister Negative rises to fill the vacuum and threaten all that Peter holds dear, including the lives of not only his beloved Aunt May but also his former girlfriend, and current Daily Bugle investigative reporter, Mary Jane Watson.

“While creating the game, the writing team’s goal was to pay homage to Spider-Man’s rich history while also shaking things up to keep players on the edge of their seats. Now we’re thrilled to see our game’s original story swing full circle and come to life in the pages of this all-new comic book series in the Mighty Marvel Manner!”

Including all-new story moments never before seen in the game as well as bonus behind the scenes content, MARVEL’S SPIDER-MAN: CITY OF WAR #1 is the first in a series of new stories from the growing Marvel Gamerverse as we press start on a brand-new Marvel Universe this March!