The War of Realms is almost here, an event writer Jason Aaron has been working towards for the last six years and Marvel has given us a teaser for it. 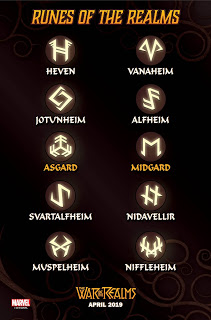 “For six years now in my run on THOR, I’ve been using Malekith’s war to explore the different realms that are strung along the World Tree. We’ve been to each and every one of them and seen how the people there have been touched by this war to end all wars. Now, as the war finally comes to the last realm standing, Midgard, where the heroes of Earth are waiting, those other realms will still have a pivotal part to play. Whether for good or ill remains to be seen…”

Back up both @brantfowler's Last Ember and my Like Father, Like Daughter #Kickstarter at a physical level to get this BEAUTIFUL print from @PapurrCat of our characters!