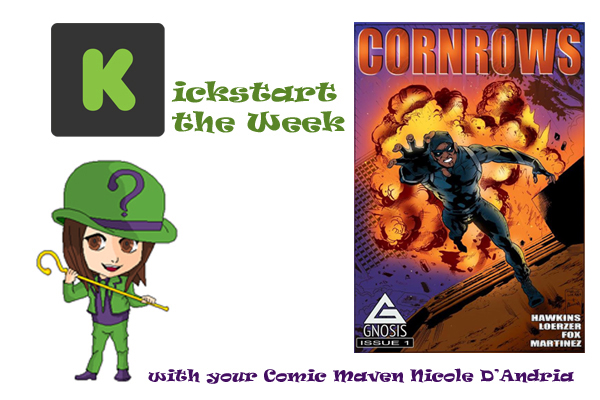 Interested in entering a gritty world for fans of shows such as The Wire, Daredevil, and The Punisher? Cornrows is the latest comic book that turns the “super” and maybe even the “hero” on its head in this “superhero” series. I spoke with writer Brian Hawkins about the beginning of his urban fantasy series.

Cornrows is written by Brian Hawkins with artwork from Marcio Loerzer (X-O Manowar), inking by Adriana Abreu, gray tones by David Fox, and lettering by Guido Martinez. The series follows Theo Mayfield, a high school P. E. teacher living in Baltimore, Maryland. The city is shaken by the death of Theo’s former student, Malik Williams. With no one doing anything, Theo takes it upon himself to go out with a mask and get revenge. But things get complicated fast, and without any superpowers to save him, Theo must survive the gritty story laid out in Cornrows: There Are No More Heroes.

The creative team is trying to raise $3,509 for the first issue before January 31, 2019 at 11:59 PM EST. Rewards include digital ($5) and physical ($15) copies of Cornrows: There Are No Heroes Part I, plus an original pin-up with a bookmark ($17) with an option for a Nathan Kelly (DREXLER) variant ($25). These are among several other reward tiers, which you can see on their Kickstarter page.

Enjoy my interview with writer Brian Hawkins below!

Me: You mentioned that fans of The Wire, Daredevil, and The Punisher in particular will enjoy this series. What about Cornrows do you think will draw fans of these TV shows in?

Hawkins: The grittiness of it, the realness, while at the same time offering something ‘else.’ The Wire was real and gritty and it showed us life on the streets of a specific part of Baltimore. However, there were aspects of it, some of the characters were larger than life. Avon Barksdale is one. Omar is another. He really became larger than life, but still somehow he could be inside this real world that The Wire presented. The same can be said about The Punisher and Daredevil. Neither one have superpowers—you could argue Matt has something, but it’s not a superpower, it’s a sense that has been incredibly enhanced… You could also argue that he believes this about himself so it’s all the more real. And The Punisher just has a skill set and drive. Cornrows has all of that—but it’s still different, it’s a different story, one of community, city, and self-realization. 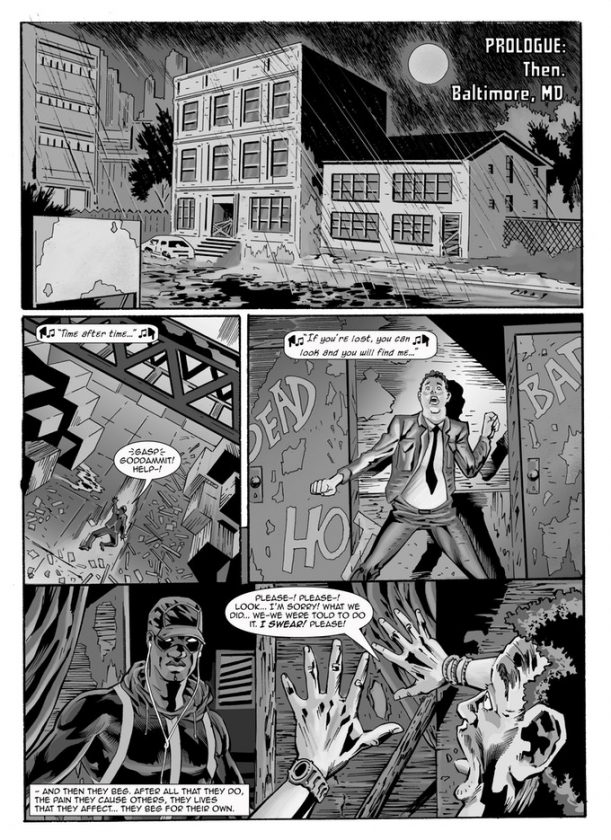 Me: Who is Theo Mayfield and how will readers be able to relate to him?

Hawkins: Theo Mayfield the character is just a man, a teacher. His background in martial arts gives him a specific set of skills that he one day decides to use to fix something he believes is wrong—avenge the death of a former student of his. On a larger scale, Theo is you, me, anyone who has ever thought about making a difference in anyway, but especially physically going out and trying to make it happen. Theo decides to actually do that.

Me: Why did you decide to set the story in Baltimore, Maryland?

Hawkins: I live in Virginia so I like to put characters that I create in a familiar place. Baltimore, Maryland isn’t that far from me—Virginia, DC, and Maryland are all a part of the ‘DMV’ (DC, Maryland, Virginia), so we all kind of connect with each other and rep each other at times, like it’s one big hub. Also, I’m familiar with the toughness of Baltimore and I wanted Theo in the midst of that. I teach (English and Writing) in DC and I live in Virginia, so I’m familiar. This story was a personal one, not because I’ve experienced it but because there’s a lot of me in it, from a human condition perspective. The story, in this form and in this particular arc, was inspired by the four missing DC girls, which happened a couple years back 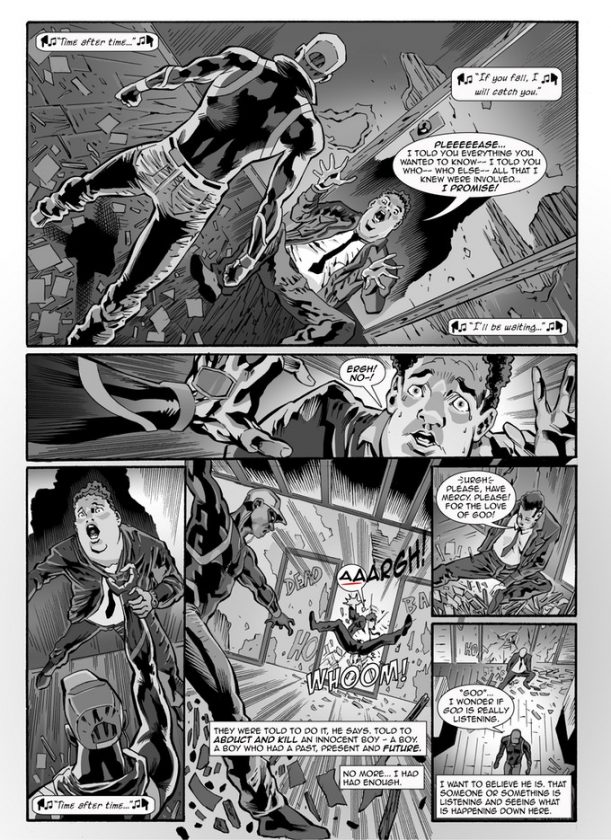 Me: This story blends realism and the “superhero” world. Why did you decide to put these two somewhat contradictory aspects together for this comic book series?

Hawkins: I believe they go together. Superheroes are just metaphors for how we see ourselves or what we would like to be or sometimes what we do not want to be—sometimes we have to look at things in a mirror to understand it. That’s what superheroes are—mirrors for us, hyperbolic and exaggerated in the physical sense but still mirrors. The ability to fly is just about ascending, higher self versus lower self, being the best that you can be—succeeding, being free; super strength is about overcoming insecurities and our own weaknesses. So, all I’ve done with the character of Theo in Cornrows is strip him of the fantastical part—I’ve returned those elements to the internal, for him to deal with internally, but he still has to do all those things externally, he still has to do some ‘super’ feats in order to do what he believes is right. He just will do it as a regular person like you and me.

Me: Why did you decide to do the book in gray tones vs. black-and-white or color?

Hawkins: Well, I wanted to strip the “color” away from it. It’s not a typical superhero book and one of the major nuances of those books is color interiors. I wanted an “un-colored” feel and nuance that felt as if the superhero “feel” of this hero book had been taken away. Black-and-white is a style of comic so that wouldn’t work. That has its own kind of nuance and feel. So, gray tones felt right. It gave Theo and this story a noir kinda feel and energy—like it’s on a black-and-white television, which isn’t really black-and-white—it’s just no color, which is more gray tones.

Me: What can you tell us about your creative house, GNOSIS Entertainment? What’s it mission statement and your future plans for it?

Hawkins: GNOSIS is about me, who I am, it’s what I believe in—knowing oneself, that great MAXIM from the Oracle at Delphi—Gnothi Seauton, “Man, Know Thyself.” I wanted my creative endeavors to be about that, to carry that, to embody that. It’s about knowing that all stories are about one thing—the human condition. And that’s why stories in all forms and mediums work, because it’s always about us and in some regard coming to know who we truly are.

As for my future plans for it—just to create. I view it as an IP company and I am not trying to make it anything really. Just want it to be what it is and to facilitate stories through it for myself and to the rest of the world, to put them out there in the Universe. I would like for it to grow, I would like for it to be there for my family, my children… 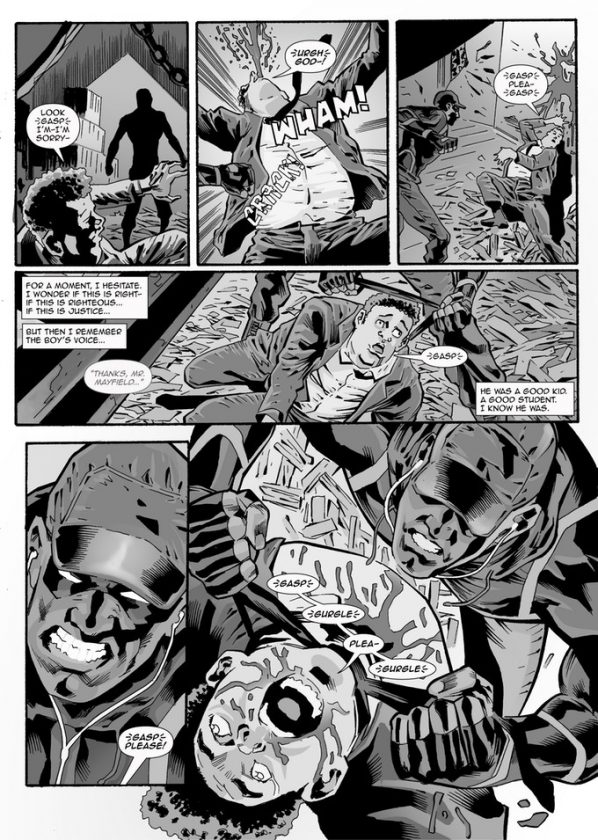 Me: And where do you see Cornrows going in the future?

Hawkins: I would like to see a live-action Cornrows. I would—I can see it, I really can. Not that I think that it’s good enough for that, but I can envision Theo in live-action and the possible impact a character like him could have on the world. But the comic itself, I would like to tell the full story. I have a full story in mind for Theo and Cornrows. 12 Issues.

Hawkins: It’s an honest project. It’s really about creating for me—the book is already finished; Marcio Loerzer, Adriana Abreu, and David Fox have been an incredible team. They’ve worked hard. So, it’s product that you’re guaranteed to get. Marcio, the artist, has worked without being paid upfront; he was willing to go backend for this story, whatever backend would be. And that’s how we finished the book. So, the Kickstarter is about paying the artist and really getting the rewards out, getting the book in the hands of potential readers so hopefully we can do an Issue 2. 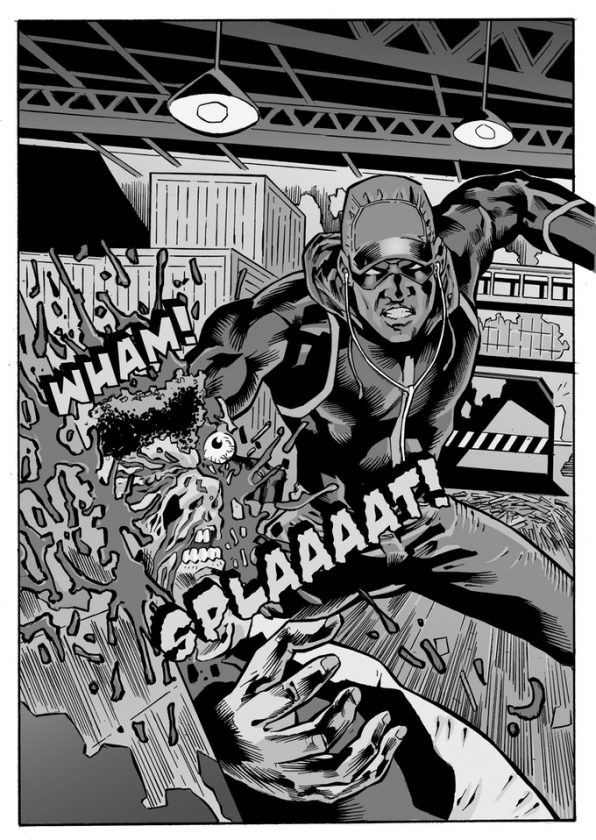 Hawkins: Write about the human condition, in some form. Find that form that is a part of you and who you are. And write. Also, writing is a craft, and so there’s some honor that should be given to it—learn it, continue to learn it, refine and revisit and revise, understand all of writing and what it means to write. Art in general is this way, any and all kinds of art.

Me: Thank you for taking the time to give us this urban fantasy comic book, Brian! Check out Theo as he tries to bring some justice to the world of Cornrows with the Kickstarter here.

THE GOOD FIGHT: A Peaceful Stand Against Bigotry and Racism