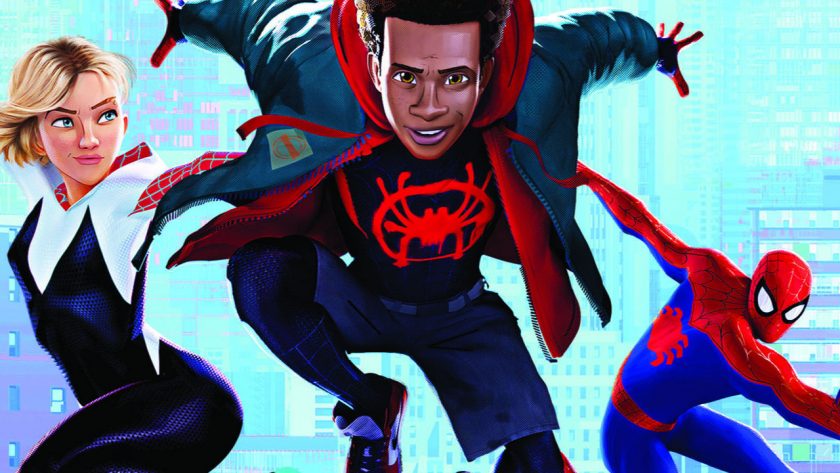 The Academy Award Nominee for Best Animated Feature Film, SPIDER-MAN: INTO THE SPIDER-VERSE, swings onto Digital February 26 and on 4K Ultra HD Combo Pack, Blu-ray Combo Pack, and DVD on March 19 from Sony Pictures Home Entertainment and Sony Pictures Animation. From Phil Lord and Christopher Miller, the uniquely creative minds behind The Lego Movie and 21 Jump Street, the film offers a fresh vision of the Spider-Man universe with a groundbreaking visual style that’s the first of its kind. 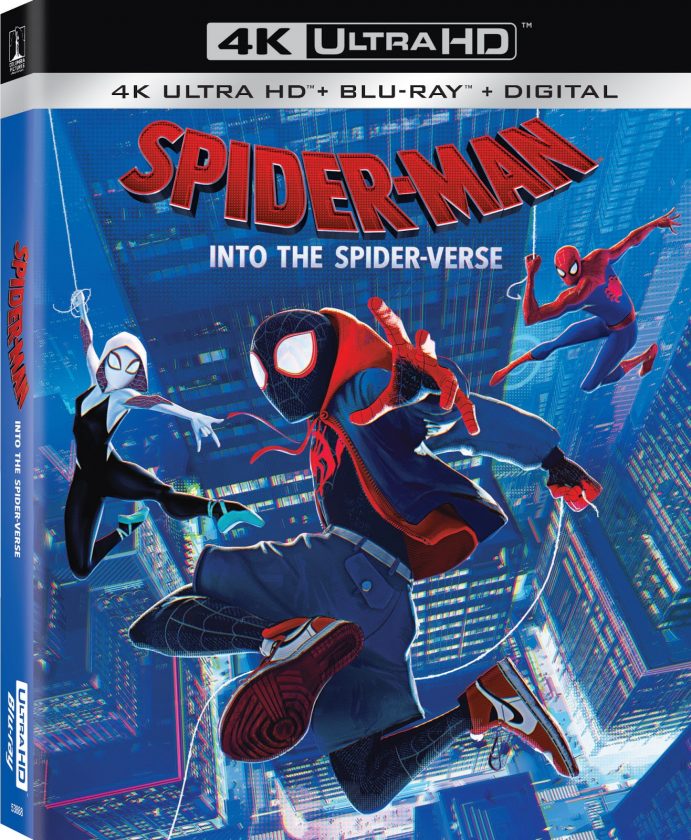 SPIDER-MAN: INTO THE SPIDER-VERSE, a film that has grossed over $350 million in theaters worldwide to date, introduces Brooklyn teen Miles Morales, and the limitless possibilities of the Spider-Verse, where more than one can wear the iconic mask. “One of the most rewarding experiences in recent months has been to hear that children are telling their parents that they see themselves in Miles, or that they want to grow up to be like Spider-Gwen, anyone can be a hero. That’s why we made this film, and we hope that feeling of empowerment is something that both audiences young and old can take away,” say Directors Bob Persichetti, Peter Ramsey, and Rodney Rothman. 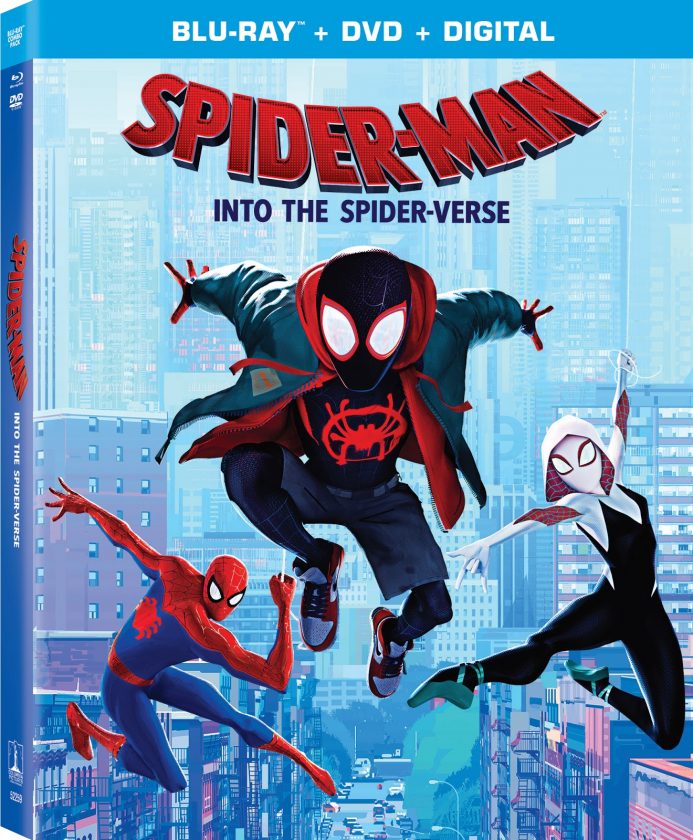 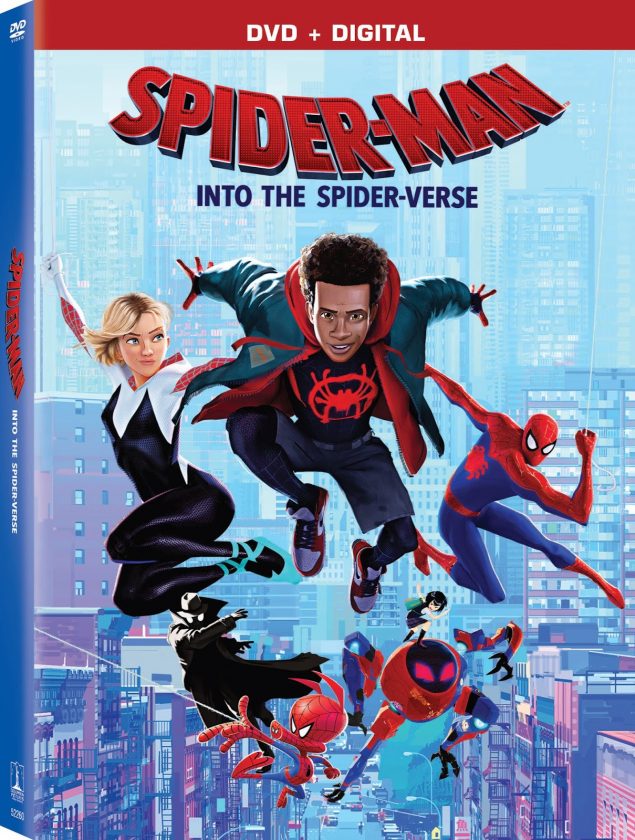 SPIDER-MAN: INTO THE SPIDER-VERSE arrives filled with engaging bonus materials that are fun for the whole family and give fans even more of the unique comic book style action that they loved in theaters with over 90 minutes of bonus content. In his very own original short,  Spider-Ham: Caught In a Ham, fan favorite Spider-Ham defeats his greatest foe, delivers sidesplitting puns, and get sucked into another dimension! It actually can get weirder! Don’t miss the thrilling Alternate Universe Mode where fans can view the film in an entirely new way to discover alternate scenes, plotlines, characters, and more with the filmmakers as their guide. Also included is The Spider-Verse Super-Fan Easter Egg Challenge, where fans are challenged to find every single Easter Egg hidden within the Spider-Verse (and there are a lot of them!).  Explore the character design in the visually stunning film including specific looks at the now-iconic Spider-Ham character as well as the classic villains who inhabit the Spider-Verse. Additional special features include a celebration of the diversity in the film and the idea that anyone can wear the mask in a feature called We Are Spider-Man, a featurette called Spider-Verse: A New Dimension, where fans can hear from the artists and filmmakers who pushed the boundaries of the comic book artform to create a visual experience unlike anything done in animation before, a showcase of all the amazing fan favorite characters featured in the Spider-Verse and the actors who bring them to life, and  a touching tribute to comic legends Stan Lee and Steve Ditko, who originally created the Spider-Man character. Other bonus materials include two lyric videos featuring “Sunflower” by Post Malone and Swae Lee and “Familia” by Nicki Minaj and Anuel AA (feat. Bantu).

SPIDER-MAN: INTO THE SPIDER-VERSE is directed by Bob Persichetti (The Little Prince), Peter Ramsey (Rise of the Guardians) and Rodney Rothman (22 Jump Street), and screenplay by Phil Lord and Rodney Rothman from a story by Lord. The film is produced by Avi Arad, Amy Pascal, Phil Lord, Christopher Miller, and Christina Steinberg. The executive producers are the late Stan Lee, Brian Michael Bendis, and Will Allegra. 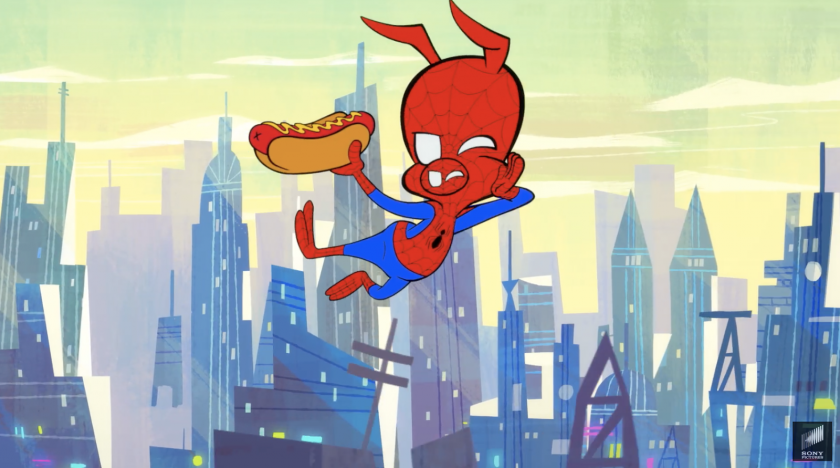 SPIDER-MAN: INTO THE SPIDER-VERSE has a run time of approximately 117 minutes and is rated PG for frenetic sequences of animated action violence, thematic elements, and mild language. With Over 90 Minutes of Special Features Including a Never-Before-Seen SPIDER-HAM Short, Alternate Universe Mode and much more!

SPIDER-MAN: INTO THE SPIDER-VERSE
In Theaters Now and
Swings Home onto Digital February 26
On 4K Ultra HD™ Combo Pack, Blu-ray™ Combo Pack
and DVD on March 19

Let us know in the comments what you think of this Sony Pictures | Home Entertainment Announcement and don’t forget to follow us on Twitter for the latest Previews, Reviews, News and Interviews!