Journey to a world of steampunk filled with ghosts in the latest standalone installment of Boston Metaphysical Society! I talk with the creator/writer and artist about this fan-favorite webcomic.

In the alternate-history of Boston Metaphysical Society, ghosts are a common part of life. Previously, a medium/spirit photographer by the name of Caitlin O’Sullivan began working for Samuel and Granville; together they battled the supernatural! She even managed to defeat The Shifter, a battle that resulted in her gaining telekinetic powers.

Now we have the standalone Caitlin O’Sullivan story, The Spirit of Rebellion. Caitlin has been thrown out by her mother for working with Samuel and Granville. Sent to live in Philadelphia, Caitlin finds a ghost and rebellion. The books is a good find for fans of Penny Dreadful, Girl Genius, Ruse, steampunk and Gaslamp/paranormal/alternative-history/fantasy stories!

Boston Metaphysical Society is created/written by Madeleine Holly-Rosing, a TV, feature film, comic book writer, and novelist. She has published several short stories and novellas based on the Boston Metaphysical Society. Her other works have appeared in anthologies, including the short story The Scout (part of The 4th Monkey anthology) and The Sanctuary (The Edgar Allan Poe Chronicles anthology). The artist for The Spirit of Rebellion is Gwynn Tavares, former sculptor and current artist for Amelia Sky. Letterer Troy Peteri, whose works include Amazing Spider-Man and Iron Man, worked on the letters.

The Kickstarter was aiming to raise $3,855 by February 22, 2019 at 2:24 PM EST. However, thanks to 400 backers, the Kickstarter has already hit over $12,000, more than 200% over their intended goal. Rewards include digital ($6) and physical ($10) copies of The Spirit of Rebellion story; readers can catch up on the previous stories quickly by backing higher tiers, including the Comics Only ($20) tier and Comics Only Digital Bundle ($22) among others, which can all be viewed in detail on their Kickstarter page.

I spoke in-depth with Madeleine and Gwynn about the latest installment to the Boston Metaphysical Society saga!

Me: Why did you decide to blend ghosts and steampunk together?

Holly-Rosing: I love history and science fiction, but I love supernatural stories. So it seemed like a good idea to blend them all together.

Me: What do newcomers to the Boston Metaphysical series need to know before reading The Spirit of Rebellion?

Holly-Rosing: That the original six issue series is about an ex-Pinkerton detective, a spirit photographer, and a genius scientist who battle supernatural forces in later 1800s Boston. (Bell, Edison, Tesla, and Houdini were part of the original story line.) The Prologue reads, “After Samuel, Granville, and Caitlin save Boston from The Shifter, a psychic creature from another dimension, Caitlin faces repercussions for standing up to the church and her mother by refusing to leave her job with the Boston Metaphysical Society. Caitlin now finds herself in dire straits and with few choices. Granville has gone home to Liberty Row, her neighbors will have nothing to do with her, which leaves only Samuel. His well-intentioned solution will force Caitlin to face a new evil and perhaps, discover her destiny.”

The first standalone story featured Granville Woods (Genius Scientist) and Tesla in The Scourge of the Mechanical Men, which runs concurrently with The Spirit of Rebellion. 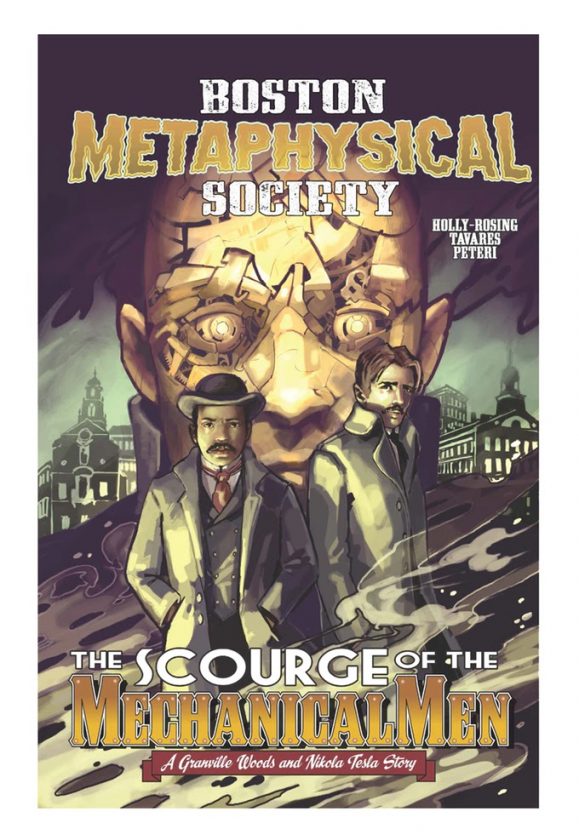 Me: And what can you tell new readers about Caitlin O’Sullivan in particular?

Holly-Rosing: She is a medium and spirit photographer. It was an ability she inherited from her father who not only trained her, but adored her. Her mother was jealous and resentful of that, but also considered their “gift” to be the work of the devil. Let’s just say, their family life was complicated.

Me: Of all the locations, why did you choose Philadelphia and what is the significance of the setting in this particular story of Boston Metaphysical?

Holly-Rosing: I chose Philadelphia for this particular story because of its large immigrant population and because it was the heart of the labor union movement during that time period. 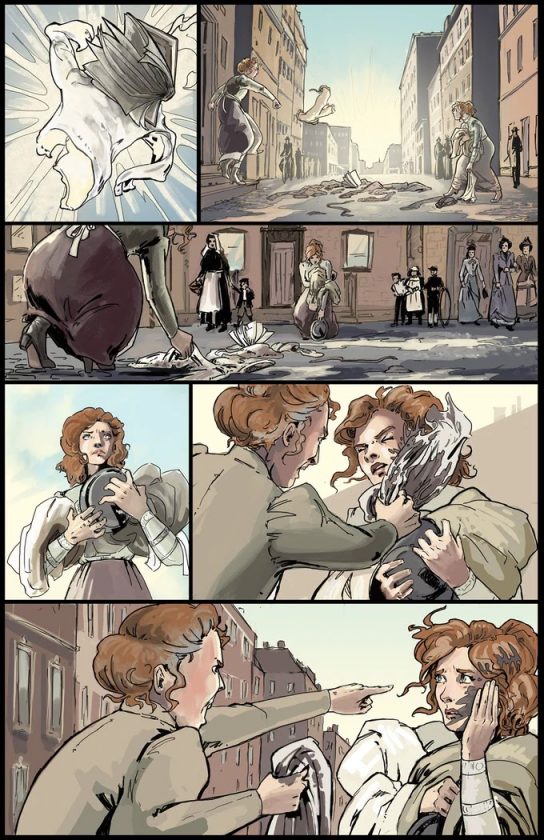 Me: What is the number one reason why you think people should pledge money to this Kickstarter?

Holly-Rosing: For the fantastic art by Gwynn Tavares and the character-driven story.

Holly-Rosing: Preparation and practice. This is my 7th Kickstarter. (I failed my first one.) In fact, I wrote a book called, Kickstarter for the Independent Creator, which I know has helped many others be successful on Kickstarter as well. But also, I’ve earned a reputation for delivering rewards on time (or close to it). I like to believe that at this point people not only enjoy the stories, but that I have earned their trust and confidence. 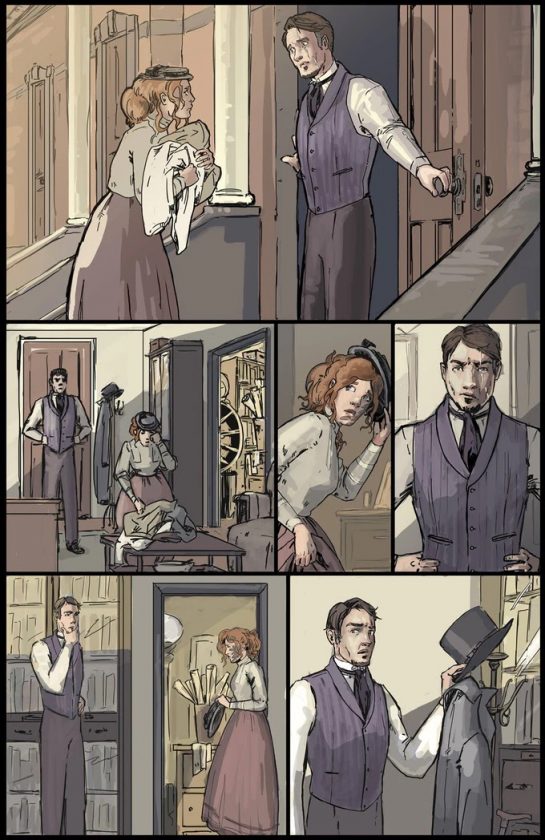 Me: Where do you see the stories of Caitlin, and Boston Metaphysical as a whole, going in the future?

Holly-Rosing: Many different ways. I decided awhile ago that everything I write that is a prequel to the original series will be in prose and everything after it will be sequential art. This was a budget decision which has worked out well. I released the first novel last Fall called, Boston Metaphysical Society: A Storm of Secrets, which won a Silver Medal as well as The Write Companion Award for Best Overall TOP PICK – Adult, Children’s and Young Adult categories in the Feathered Quill Book Awards. My plan going forward is to produce one standalone graphic novel a year while writing a trilogy of novels based on the House Wars. (The House Wars are my version of the American Civil War.)

Holly-Rosing: Read a lot, write a lot, and be open to constructive criticism.

Me: How did you become a part of this project and what were your initial thoughts to helping create the world of Boston Metaphysical?

Tavares: I started working with Holly-Rosing over a year ago. We had a mutual acquaintance who knew I was an artist and she was a writer. I was really excited to take this project on. Comic books are a lot of work and I have been lucky to work on ones that I really enjoy. I got to do a lot of research for the Victorian era; I grew up in a little town out in the middle of nowhere that was just all Victorian houses and businesses so drawing this world was like revisiting a very special place. Also, Boston is a great setting for a story, it’s beautiful.

Me: What were some of your favorite moments when working on artwork set in a steampunk world?

Tavares: The over the top detail and the strange, playfully dangerous moments that Steampunk celebrates. There is a scientist who does something very life risking and heroic. She is great! I really enjoyed designing her room and what would be important to her. 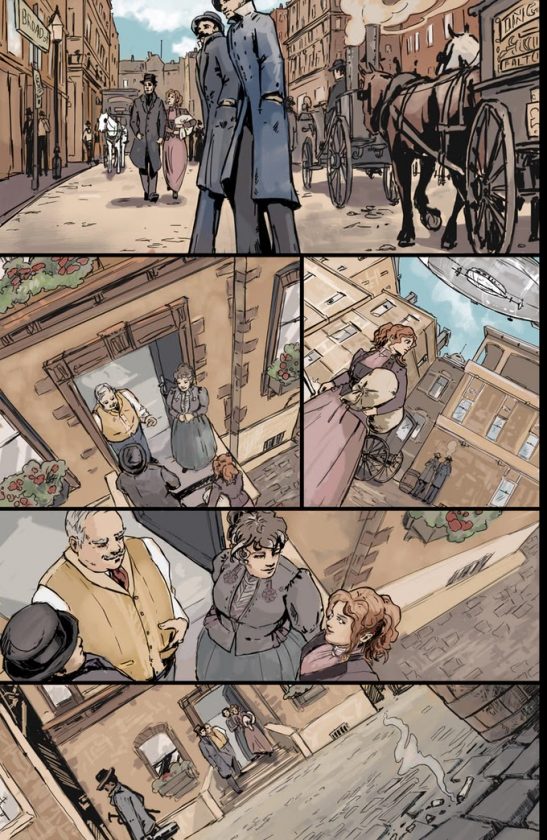 Me: When creating a ghost in the story, how did you go about making her look and feel unique from other spirits in stories?

Tavares: I defaulted to green because I wanted people to instantly recognize a hovering human as a spirit. It’s a kind of Ghostbuster’s Slimer green, even though this spirit is quite the opposite of such a grotesque monstrosity; no offense to Slimer. I put some solid lights in her, to give the feeling of an internal spirit, the “real” part of the ghost in a way. The rest of her is just an apparition but the little lights in her is the real mojo. I like to think that if something bad happened to her, those little lights would go out and she would just be a mindless apparition haunting people and no longer herself. Also, Holly-Rosing had the good idea of making her glow, so I treated the glow as a sort of smokey constantly moving haze. She was really fun to create.

Me: What is the number one reason why you think people should pledge money to this Kickstarter?

Tavares: This comic is great! It is my best work so far. The story is also compelling, I see it leading to some dangerous and exciting areas, and if you are someone who is familiar with the characters there are some huge events in their development. It’s kind of horrifying in my personal opinion, which is great; I love seeing some earth shattering character development. Also, if you are new to the story, it is a good entrance into a complex and well-constructed universe. The characters feel like real people with real connections, even the ones that just show up for a scene or two. Also, there are a bunch of other comics with these characters, so you really do get to enter a universe. 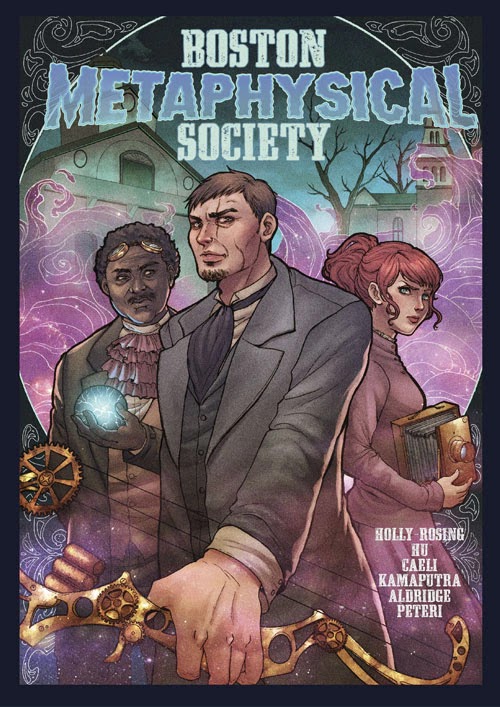 Me: Thank you for taking us along on an adventure to the unique and enticing world of Boston Metaphysical Society. If you’re reading this and interested in checking out the spooks of Philly, see the official Kickstarter for The Spirit of Rebellion story here.