With a title that definitely catches people’s attention, PBOW: World War Bitch #1 is the sequel to the dystopian sci-fi action story Pregnant Bitches of War! Get ready for a continuation of the cult hit that combines The Handmaid’s Tale and Kill Bill!
PBOW: World War Bitch #1 is 40 pages that continue the hit series that started five years ago. The story revolves around six pregnant women taken through time by mad scientist Nikola Tesla. They need to save the world from a terrifying future that they helped create!
The series is written by FRIED Comics publisher Clay Adams, who we previously talked to during his Kickstarter for Red Xmas, and Alexandre O. Philippe, director of 78/52. Fabio Ramacci (Modern Dread) is the artist and Italian artist and colorist Ilaria Chiocca did the colors.
There are only a few days left to back this Kickstarter; they’re trying to raise $6,666 by August 17, 2019 at 12:59 AM EDT. Get a PDF ($6) or physical ($20) copy of PBOW: World War Bitch #1, plus catch up on the previous volume ($12) and even get everything published by FRIED Comics ($18), which is over 400 pages of content! Help them reach their goal here!
I spoke in-depth with creator/writer Clay Adams about his project:
Me: What have been some of your favorite reactions from people when they first hear your title’s name?
Adams: Most people laugh, which is the reaction you want. It’s a ridiculous title! And it does the job: it tells you exactly what kind of over-the-top ride this book is going to be.
A very small number of people get uncomfortable, like they don’t know how they’re supposed to take it. (Usually, those people are guys. Most women get it—and love it—immediately.) In those cases, you just shrug. What can you do? 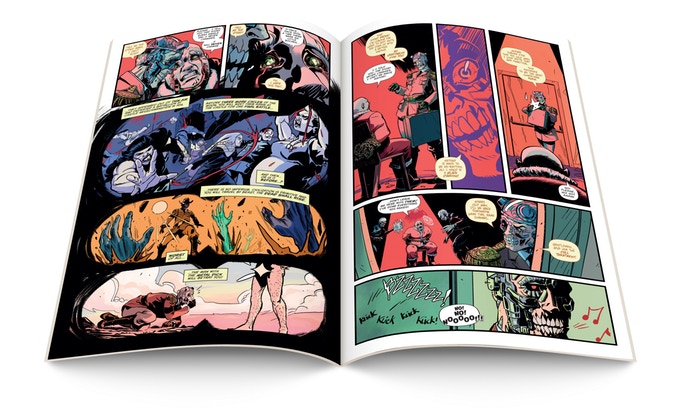 Me: A sequel to Pregnant Bitches of War, what do new readers need to know about the series to understand World War Bitch?
Adams: Here’s the basic pitch for the series: “Plucked from the time-stream by mad scientist Nikola Tesla, six pregnant women accidentally kill a young Hitler—and unleash a nightmare future! Now, with Tesla acting as Charlie to their Angels, they must defeat the Exalted Father and save the world from a hell of their own creation… before their water breaks.”
When this new arc kicks off, the ladies are on the run from the Exalted Father, Tesla’s android body has been destroyed, and now they are headed to Africa in search of Thomas Edison—the one man they believe can put Tesla back together and help them get home. But they didn’t count on meeting the Anti-Bitches, or Gustave the dick-eating alligator, or… well, no spoilers.
We’ve purposefully made this new issue a great jumping-on point that’s new reader friendly. We recap the last volume’s events at the front of the book, and we’re throwing in a PDF of volume one for all print backers so everyone can easily catch up. 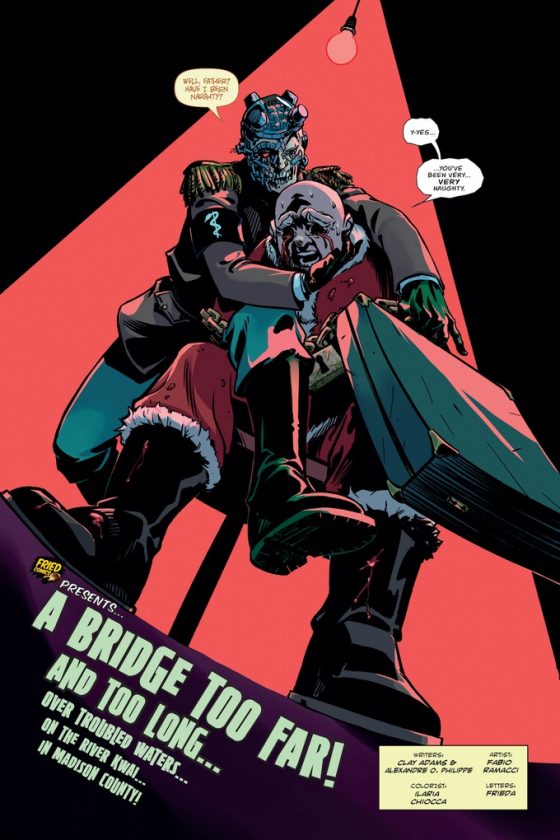 Me: What aspects of the series reflect your comparison of it to The Handmaid’s Tale and Kill Bill?
Adams: The world of PBOW is a dystopian nightmare where six pregnant women are trapped in a world run by a misogynistic, racist dictator. And if that sounds buzzy, or like we’re trying to comment on current events, you should know that this series started gestating (ahem!) back in 2009 and our first issue debuted in 2013.
Like The Handmaid’s Tale, it’s a sometimes-brutal depiction of this dark fantasy world, focusing on the women who fight against the powers that be (AKA “Dad”).
But we try to keep the subject matter from getting too grim by presenting it in a fun, over-the-top, Kill Bill, action-y way. 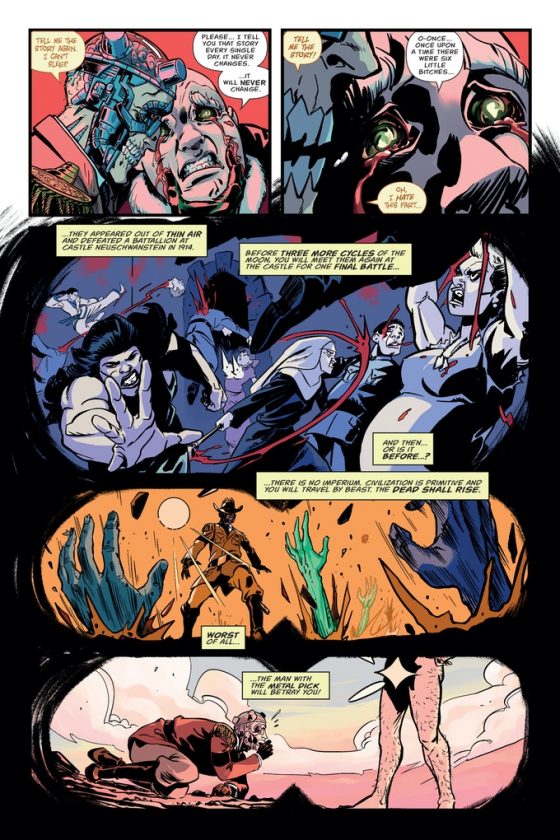 Me: If you got stuck in the world of PBOW and you could only pick one of your main cast of characters to protect you, who would you pick and why?
Adams: Birdie, hands down. She’s a trained killer with a chip on her shoulder, a hardened military vet who keeps cool at all times. Starbust Magazine called her “a heroine who’s part Ripley, part Snake Plissken, and all badass.”
Me: Of the historical figures you’ve written in this series, who has been your favorite to write and why?
Adams: Probably Nikola Tesla, because he’s the ultimate absent-minded professor. He’s an absolute genius who maybe doesn’t have the best social skills… or always think through the ramifications of his experiments. We’ve had a lot of fun at his expense. 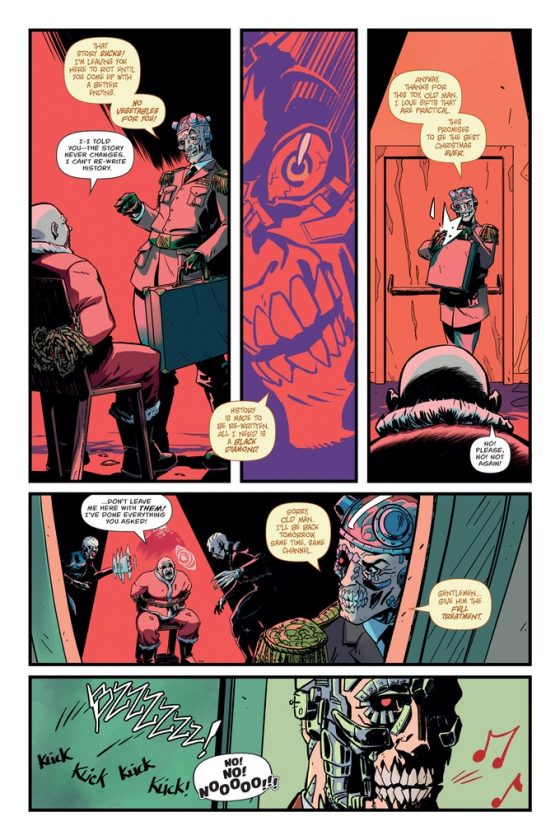 Me: What is the number one reason why you think people should pledge money to your Kickstarter?
Adams: If you like dark comedy and over-top-action, if you’re a fan of comics and shows like Preacher
or The Boys, or you just like smart weirdness like Rick and Morty, then you’ll love PBOW.

Kickstarter gives you a chance to be on the ground floor and actually help produce the comic. We’ll give you a credit in the book, and when you back for a print copy, you’ll get a rare, limited edition item that’s been crafted with a lot of love.

Me: What inspirational words do you have for aspiring comic book writers?
Adams: Just make comics! You’ll learn so much more from making something (and actually finishing it) than you will from reading about it, or taking classes, or just talking to people about your dreams. The first thing you make isn’t going to be perfect, but figure out what worked (and what didn’t) and make the next thing. That won’t be perfect either. Wash, rinse, repeat until you’re a grizzled old pro receiving an Eisner. 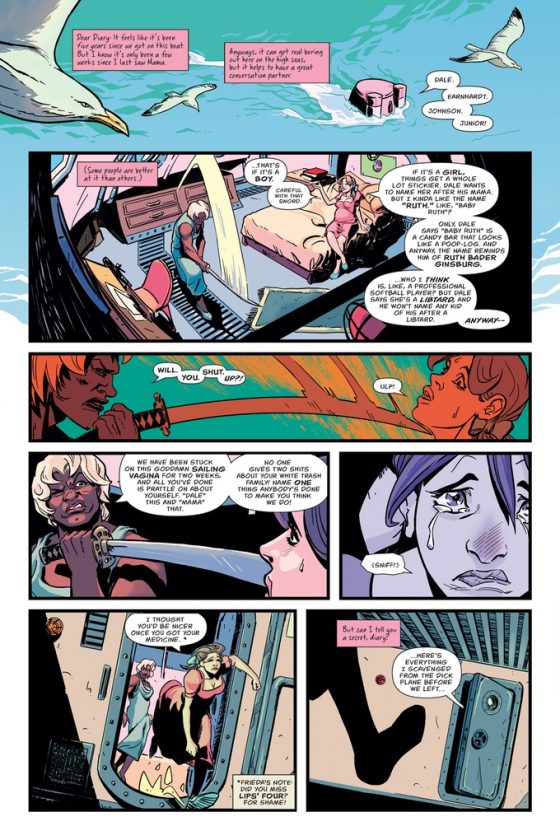 Me: Thanks for taking the time to explore the birth of PBOW with us! Readers can check out the official Kickstarter page here.
Do you have a Kickstarter? Want to be interviewed about it and have the project featured on “Kickstart the Week?” Let me know in the comments below or message me on my website.
Other “Kickstart the Week” features:
SAFFRON: Spacetime Academy Adventures #1
NOOK – a WWII Ghost Story (Hardcover Graphic Novel)
Spirit’s Destiny – Ongoing Comic Series
Boston Metaphysical Society: The Spirit of Rebellion
47 Furious Tails, Issue #1