Skip to content
By: Nicole D’Andria
From Comic Frontline’s very own Chris Dibuduo and Brant Fowler, Celestial Falcon is a supernatural superhero comic book about a group of teenagers on a quest to vanquish a dark evil. And the fate of the entire world is on the line!

Celestial Falcon is a coming-of-age superhero story following Chris and his group of friends. They discover an
ancient power, leading to the story of Celestial Falcon! There is even a deluxe version available, which is an extra-sized 28 interiors page with an addition four page backup story further developing the six main characters that you can’t get in the standard edition.

The comic is great if you like superhero comics such as Spider-Man, Superman, Teen Titans and Invincible. It will also be part of an expanded universe stemming from the publisher Last Ember Press’ Shooting Star Universe (formerly 529 Studio) Imprint. It’s created/co-written by Chris Dibuduo (his first comic!) and co-written/lettered by Brant Fowler (The Last Ember). The penciler and cover artist is Lucas Santos (Spider-Cop) with inks and colors by Lisa Moore (Garfield, Peanuts, Damsels).

The Kickstarter is looking to reach its $2,000 goal by October 9, 2019 at 12:00 AM EDT. Rewards include Celestial Falcon #1 (Digital $5; Physical $18), two vintage variant covers ($20), a signed bookplate & audio commentary ($25), plus even more rewards when you check out their Kickstarter page here. At higher reward tiers, backers can get The Celestial Crate, which includes a variety of items from the campaign including variant covers, stickers, buttons, posters, and prints. All backers will get extra bonus content throughout the campaign, including stickers, prints, digital comics and more. Plus, backers who pledge for a physical reward will also get the Main Cover (A) and an eight page annotated
companion comic.
I’ve spoken with co-writer Chris and Brant, who’s work you’ve no doubt enjoyed on Comic Frontline, below!

Me: What makes the superhero universe you’ve started in Celestial Falcon special?

Chris: This universe is very much like ours is right now. Life is normal, day to day things move on and nothing special happens. Then one day this universe unveils an ancient secret and an ancient war that no one even knew was happening. Now life has changed and nothing is ever normal again.
When I wrote Celestial and his universe I referenced a lot of things that we see and experience in the real world, then let the world kind of grow and evolve in front of me. Some characters that you will read about in later issues and stories come from a lot of random situations. A lot of the time I would start the story and then it would honestly tell itself to and through me. What makes this universe unique for me is it’s alive and it has a story to tell that I want to tell for that universe.
Brant: Another thing that makes this universe special is the supernatural element to it that Chris alluded to. Think of Buffy and Angel, or Supernatural, things like that. This isn’t just your typical superhero universe, there is that kind of twist and element to it that will be revealed as the story progresses.

Me: How would you describe our hero Chris and his friends? What about them do you think readers will find relatable?

Chris: Chris and his friends are average teenagers. When you are introduced to them in this issue, especially this deluxe version, you will see they start off as just normal teenagers with normal everyday problems and lives. I feel like each character has a personality that someone can relate to, whether it’s a goofy personality, a strong one, a leader one, a heartfelt one. There will be a lot of moments in this story and others that will keep each of these characters human and relatable on multiple levels with many different people. To add to each character we write in this story, I’ve mostly based them off of friends I know or have known in the past; the main character of course I put most of my personality into.
Brant: I would describe them as a tight-knit group of friends that have each other’s backs through thick and thin. The kind of friendship that lasts, you know? It’s what makes them such a strong unit. As far as their relatability, like Chris said, there’s someone for anyone to latch onto in this story. We’ve taken great care, especially with the brand new back-up story in this deluxe edition, to showcase each of the characters’ personalities and lives to give more insight into each of them. We think readers will really enjoy this sneak peek into their worlds.

Me: As co-writers, how would you describe your writing process with each other? Do you each tackle specific elements in the script, write specific characters’ dialogue, etc.?

Chris: For this issue we decided to take my script and tackle transferring it into a comic five pages at a time. Then we would get together every five pages and discuss the changes and pages until we agreed and moved on to the next. This way worked, but with issue 2 we found a better way to handle our co-writing, which for both of us has been so much better. I look forward to answering this again when issue 2 is on Kickstarter.
Brant: Yeah, with this issue it was very much Chris does his part, I do my part, meet up and discuss, whereas going forward it’s more of a joint writing situation. Both work in their own ways, but for us, we think we’ve settled on the way that works better for us with issue 2 and beyond, like Chris said.
To be honest, writing this first issue we were both still finding our legs as co-writers, never having co-written anything with anyone before. So it was a lot of trial and error, but in the end we are proud of the story that we produced from it. 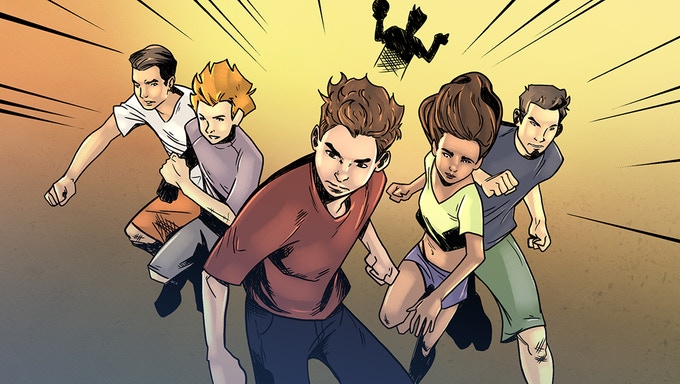 Me: How did you come together to decide on your art team?
Chris: Brant found a lot of people on Deviant Art and a bunch of artists. Together we went through several profiles but once we found Lucas we instantly fell in love with his art style for the book.
Me: You included vintage variant covers in the Kickstarter. Why did you decide to go with the vintage movie poster look? How does it reflect what Celestial Falcon is all about?
Brant: The vintage movie poster look was an idea Lisa had actually, and she just ran with it. She took Lucas’ art and made it up really nice to reflect some popular movie posters like A Clockwork Orange and so forth.
The stark silhouette image of Chris with wings hints at things to come and kind of embodies the heroic aspect of the book. Plus, it looks really cool. Ha ha! 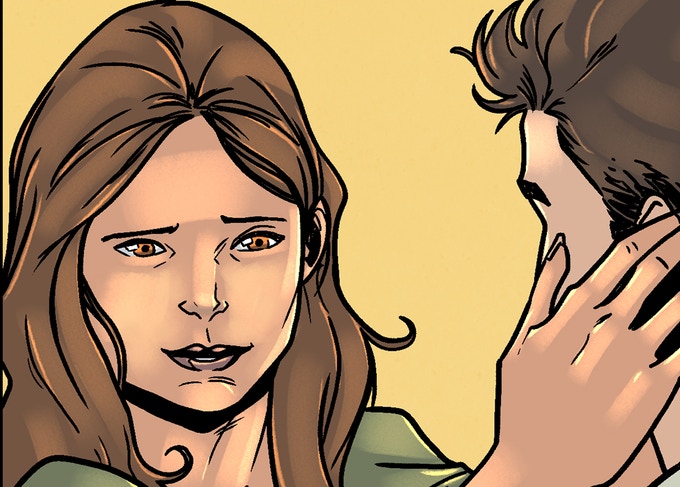 Me: If you could have any superpower, which one would you choose and why?
Chris: I’ve always wanted flight. I think everyone dreams of just taking off into the sky and flying to wherever they wanted. It’s a power that many people want. As the series goes on though and other powers are revealed, there is one I would find hard to choose between it and flight.
Brant: Telepathy. Lol I’d probably regret it, but my whole life I thought it would be cool to know what other people were thinking. Again, I’d probably regret knowing that, but it would have made certain aspects of life SO much easier. Ha ha!
Me: Celestial Falcon is part of Last Ember Press’ Shooting Star Universe (formerly 529 Studio) Imprint. What can you tell us about this imprint and your future plans for it?
Brant: It’s far too early to expand on the 529 U, which is where Celestial Falcon takes place (that’s basically our superhero universe at LEP), but we do have plans for the imprint going forward.
Chris and I have talked about several projects expanding Celestial Falcon’s universe as the story progresses, of course, so there is a plan for an extended universe there. Outside of that, there are other projects that both Chris and I have in the works that will fit under the Shooting Star Universe (SSU) imprint that are not necessarily part of the 529U (Celestial’s world).
I know that’s a lot of imprints and universes for a small indie company, but trust me, we’re taking things slow and putting out new projects when and only when it makes sense to do so! 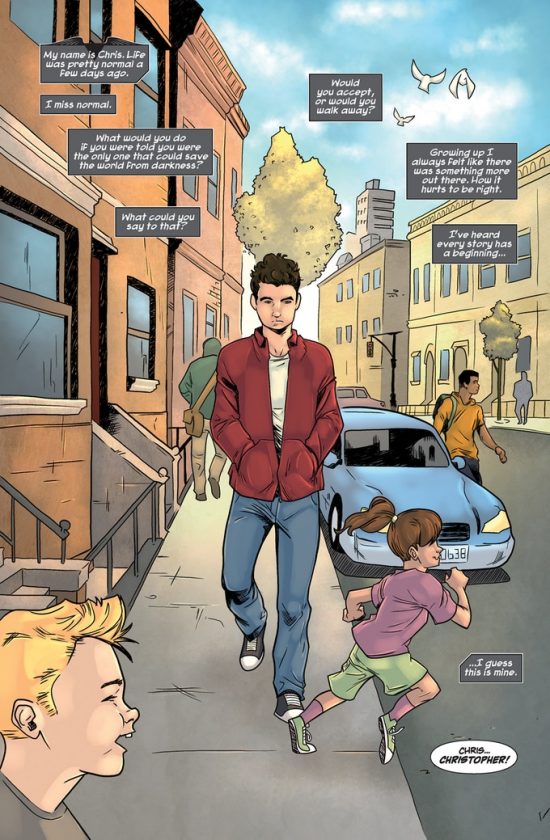 Me: What is the number one reason why you think people should pledge money to your Kickstarter?
Brant: I can’t give only one, so I’m going for a joint reason. A. If you like helping dream projects come to life, and B. if you like to read and support great independent comics that were created with love and passion, have great art and story, and just like cool stuff in general. 🙂
Me: What inspirational words do you have for aspiring comic book writers?
Chris: Believe in your dreams, and chase them. Even if people say your idea isn’t good enough, do it anyway. You will be surprised how important your stories could be to someone somewhere. The world needs more dreamers and creators NOW more than ever.
Brant: You are the only you. No one else has your voice, your experiences, and your take on things. Be you, and write every day. As cliché as it may sound, don’t give up, ignore the naysayers, keep honing your craft. And if I could give a piece of advice for writers trying to start out, go find a bunch of anthology projects and submit, submit, submit!

Me: Thanks for taking the time to share this super world with us, Brant and Chris! If you’re reading this and want to get in on the ground floor of this universe, check out Celestial Falcon on Kickstarter.
Do you have a Kickstarter? Want to be interviewed about it and have the project featured on “Kickstart the Week?” Let me know in the comments below or message me on my website.
Other “Kickstart the Week” features:
Coronary Volume 1 (#1-4)
PBOW: World War Bitch #1 Break Kickstarter grindhouse style!
SAFFRON: Spacetime Academy Adventures #1
NOOK – a WWII Ghost Story (Hardcover Graphic Novel)
Spirit’s Destiny – Ongoing Comic Series